Fourteen demonstrators were arrested for alleged links to violent incidents, including the vandalizing and attempted arson of a Supreme Court office, assault and robbery against state journalists, as well as attacks on authorities with Molotov cocktails and blunt objects.

Meanwhile, opposition spokespeople have claimed that several dozen people were injured in the unrest.

According to the top ethics and transparency watchdog, Capriles reportedly signed international agreements with the British and Polish embassies without legal authorization, flouted mandated procedures in state contracting, and failed to present the 2013 state budget for approval by the regional legislature.

Capriles blasted the move as part of an alleged “self-coup” by the Maduro government in a statement on his official Twitter account. Peru, Argentina, and Mexico, whose right-wing governments have been among Venezuela’s most vocal critics, likewise issued public declarations condemning the measure.

The ban leaves Democratic Action (AD) leader Henry Ramos Allup as the likely opposition candidate in next year’s presidential elections. The former National Assembly president was recently endorsed by the hard-right Popular Will party, whose own leader, Leopoldo Lopez, is currently serving a 13-year prison sentence for leading violent anti-government protests in 2014.

Saturday’s march began late morning at six meeting points in the wealthy eastern Caracas municipality of Chacao with the plan of converging on the Francisco Miranda Avenue.

Clashes with authorities subsequently ensued on Liberator Avenue, Sabana Grande Boulevard, and the Francisco Fajardo Highway, with masked protesters hurling rocks, bottles, and improvised explosive devices at state security personnel, who responded with tear gas in an effort to disperse the mobilizations. 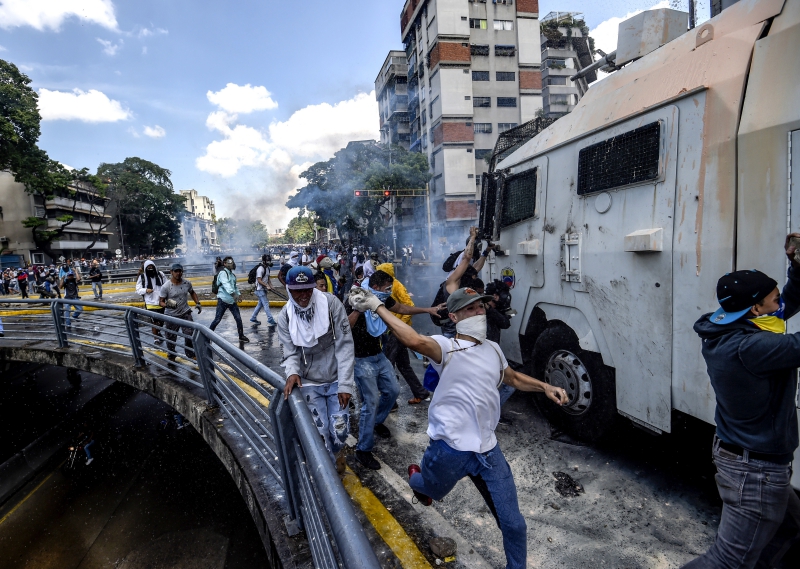 On Francisco Miranda Avenue, video footage shows hundreds of opposition supporters attacking a Supreme Court (TSJ) facility with Molotovs and other blunt objects taken from a nearby construction site, causing significant damage to the building’s exterior.

Nine people have been arrested and indicted in connection with the violence, including two adolescents. 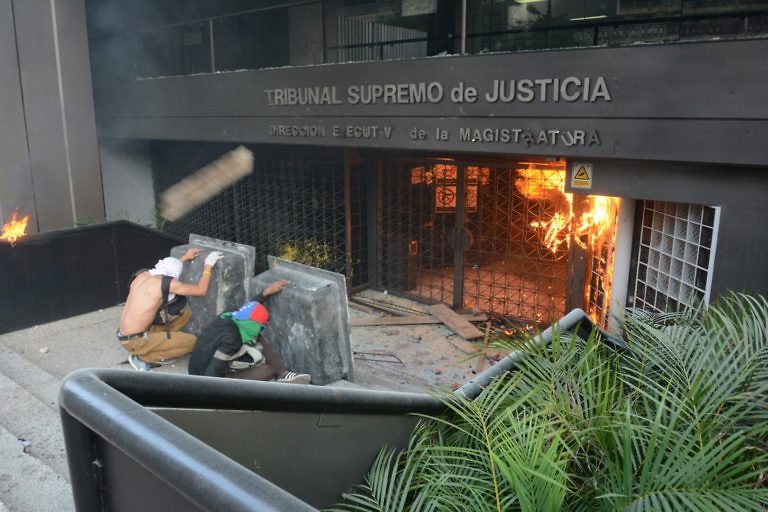 Opposition leaders took to social media to condemn the attack as an act of “aggression”.

“We cannot endorse or accompany the aggression against the TSJ office in Chacao. This type of action only strengthens the dictatorship,” declared National Assembly Vice-President and Popular Will party leader Freddy Guevara via Twitter.

According to teleSUR correspondent Madelein Garcia, Saturday’s protests also saw opposition supporters reviving other 2014 guarimba tactics, including drenching roads in oil to provoke motorcycle accidents and stringing cables along thoroughfares to decapitate motorcyclists. Six people lost their lives in 2014 due to these tactics.

A camera crew for the state television network VTV likewise reported being assaulted and mugged by protesters while covering the opposition march. In a video taken at the demonstration, a crowd of opposition supporters can be seen descending on VTV journalist Carlos Sanchez and cameraman Johny Verdu, attacking both men and attempting to steal the camera. Sanchez was robbed of his wallet and two mobile phones, while Verdu’s camera was reportedly damaged.

In total, Venezuela’s Public Prosecutor’s office has confirmed that it will be indicting fourteen people for offences allegedly committed during the day’s protests.

Saturday is the latest in over a week of anti-government demonstrations convened by the MUD to demand “respect for the National Assembly, humanitarian aid, freeing of political prisoners, and elections”.

Over the last week, opposition supporters have repeatedly clashed with state security forces attempting to prevent confrontations between pro and anti-government marches in central Caracas.

The demonstrations have likewise included widespread acts of violence, including Thursday’s ransacking of the Gustavo Herrera public elementary school in Chacao and the use of hundreds of its desks and chairs in makeshift barricades. 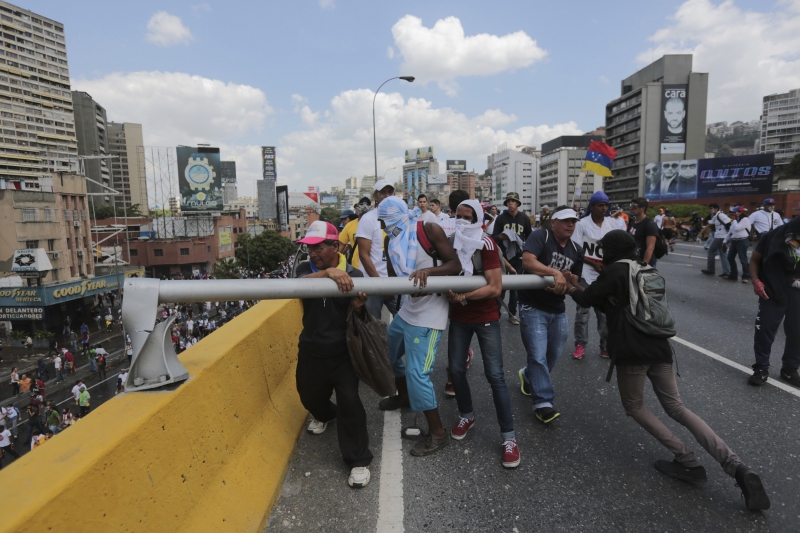 This recent wave of protest comes amid a tense institutional standoff that has seen the opposition-held parliament attempt to remove the justices of the Supreme Court over a pair of controversial March 29 rulings that temporarily authorized the judiciary to assume certain legislative functions in light of the National Assembly’s contempt of court.

The rulings were subsequently reversed on April 1, and the national ombudsman – who heads the Moral Republican Council tasked with overseeing the other branches of government – declared Thursday that the TSJ justices had committed no fault that would merit their dismissal.

Nonetheless, anti-government mobilizations have continued with more protests planned for Monday and Wednesday of this week.

Opposition spokespeople have indicated that the demonstrations will continue until the government fulfills all of their demands, including bringing forward presidential elections constitutionally fixed for 2018.

Apr 6th 2017
Chavistas and opposition supporters took to the streets of the capital this week as international pressure mounts against the Venezuelan government.

Dec 9th 2022
The campesino protesters were received at the Agriculture Ministry but did not get a definitive answer to their demands.

Nov 30th 2022
VA columnist Reinaldo Iturriza sets his gaze on an "army" of workers that sort through waste to complement poor wages.
END_OF_DOCUMENT_TOKEN_TO_BE_REPLACED