Caracas, April 5, 2017 (venezuelanalysis.com) – Thousands marched in Caracas in defense of the Venezuelan government Tuesday amid escalating efforts to suspend the South American country from the Organization of American States (OAS). Similarly, opposition forces took the streets of the capital in protest of the Supreme Court’s annulling of parliament, resulting in widespread violent clashes with authorities.

Afro-Venezuelans, women, students, workers and other sectors of civil society mobilized early Tuesday morning from Plaza Morales to the corner of San Francisco in downtown Caracas.

In particular, government supporters rallied against a recent resolution approved by the OAS Monday, declaring an “altercation of the constitutional order” in Venezuela. The resolution was approved by only 15 member-states in a session Venezuela and Bolivia decried as a “coup”.

Ultimately, Venezuelan authorities blocked the march using tear gas and rubber pellets. Authorities said the measure was taken to prevent violence, as oppositions leaders called on followers to express their dissatisfaction with the Maduro administration in the streets. 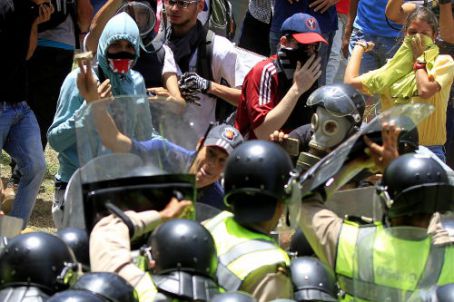 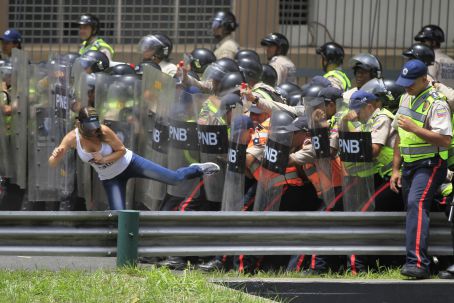 In one video, an opposition demonstrator wrests the rifle from a GNB official and attempts to beat him with it before being restrained by fellow protesters.

In another video, protesters can be seen violently attempting to push through the security cordon near Plaza Venezuela, while a GNB officer calls for calm on a microphone, explaining that the measure is aimed at preventing the two marches from clashing. 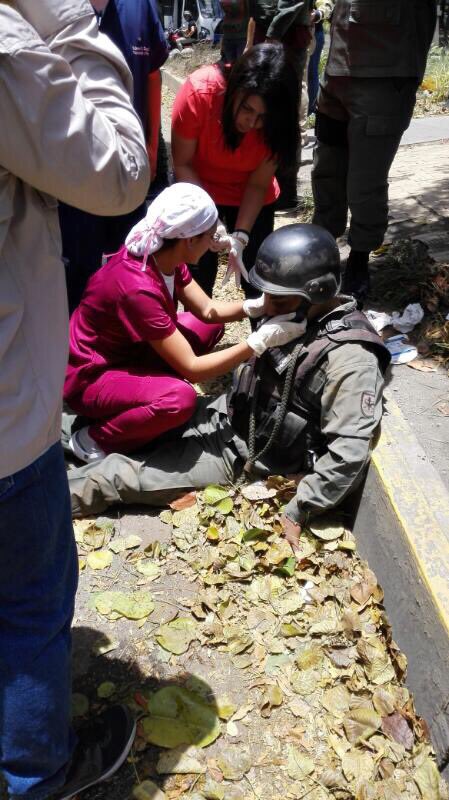 A nurse attends to an injured GNB official. (@madeleintlSUR)

A correspondent for the multi-state Latin American network teleSUR was likewise on the receiving end of protesters’ violence.

The reporter was covering the opposition march when she was publically called out by Democratic Action leader Henry Ramos Allup and forcibly removed from the demonstration.

Meanwhile, according to the opposition mayor of the eastern Caracas municipality of Chacao, Ramón Muchacho, there were at least nine demonstrators injured in the day’s events.

Saab reported speaking with the head of the Bolivarian National Police, whom he called on to open “an exhaustive investigation to identify and punish those responsible”.

Despite the violent clashes, Venezuelan President Nicolas Maduro lauded the day’s marches as an example of peace and democracy.

“Today peace has triumphed,” he declared, speaking from a local government health clinic in Apure state.

The opposition called their march in protest of a pair of Supreme Court rulings last week that would have temporarily empowered the judiciary to assume certain legislative functions. However, the decisions were promptly reversed Saturday at the urging of the country’s National Security Council.

Venezuela’s opposition-held National Assembly has been “null and void” since it swore in three Amazonas under investigation for vote-buying in violation of a Supreme Court order.

Nonetheless, in recent days, parliament has reportedly begun proceedings to remove Supreme Court justices in a move that is likely to only deepen the country’s heated institutional standoff.

Hard-right opposition party Popular Will (VP) has convoked another march for this Thursday in the South American capital “against dictatorship and the coup”. Chavista forces will also mobilize in a “great national march for respect of the constitution and peace”.

Apr 12th 2017
Venezuelan President Nicolas Maduro placed a call Sunday for the National Electoral Council (CNE) to set a date for regional and municipal elections due this...

Nov 28th 2022
VA columnist Jessica Dos Santos reflects on a banking system that is very much tilted in favor of larger companies.
END_OF_DOCUMENT_TOKEN_TO_BE_REPLACED