Immediately after Nicolas Maduro was elected to the presidency of Venezuela last Sunday, opposition candidate Henrique Capriles refused to acknowledge the results of the election, and claimed that the government had committed fraud. In what follows, I will list all of the alleged evidence of fraud cited by Capriles, and explain why every single example is either demonstrably false, or extremely implausible.

The first example given by the Capriles campaign has to do with what is known as an “assisted vote” in which electoral authorities assist certain voters in using the electoral machine. The Capriles campaign presented on Sunday videos of various people being aided in this way at various voting centers.

The claim was that with “assisted voting” people were being pressured by electoral authorities to vote for Nicolas Maduro, and that the votes at those voting centers should therefore be voided. Capriles claimed that this had happened at 564 different voting centers, affecting nearly 1.5 million voters. However, there was not a single independent report of any voters who said they were not able to vote for who they wanted. Not a single voter or witness came forward to say that they had been obligated to vote for one candidate or the other.

The “assisted vote” exists as a mechanism that voters can request if they do not understand how to use the electoral machine, or if they have physical limitations that make it difficult for them to vote alone. As one Venezuelan commented on the video on Youtube, “You can ask to have someone help you vote if you want. I asked for help the first time I voted and it was a family friend who was there. My god, these people [the opposition] will make up anything."

Shortly after, it was shown that one of the videos going around on the internet was fake. It had been posted on Youtube last October, and thus was obviously not from Sunday’s election as was being claimed. The source of the other video could not be confirmed, and the Capriles campaign did not give details about who the people were that were involved.

But more importantly, the “assisted vote” claim ignores the fact that nearly all voting centers have witnesses present from the opposition parties, in addition to randomly selected citizens working the voting stations, who would have noticed if any voters were being pressured to vote against their will. Yet not one of these witnesses reported seeing anything, nor have any media outlets presented a single case of this happening, even though Capriles claimed it happened at 564 voting centers.

All of the opposition witnesses signed off on the electoral process at the closing of the polls on Sunday, certifying that nothing had gone wrong. As another commenter on Youtube said: "This is a lie. I worked at the voting center. We were watching the people from the [governing party] PSUV and everything came out excellent..."

In the days that followed the elections, new allegations and accusations of fraud came out of the opposition camp. On the internet, many opposition supporters began circulating photos of ballot boxes being burned, and claimed the government was destroying the results to hide the evidence. Opposition media disseminated the photos and claimed they were real. Below is a tweet from opposition media outlet RCTV that says, “More electoral material that they want to make disappear, and we received from our followers.” 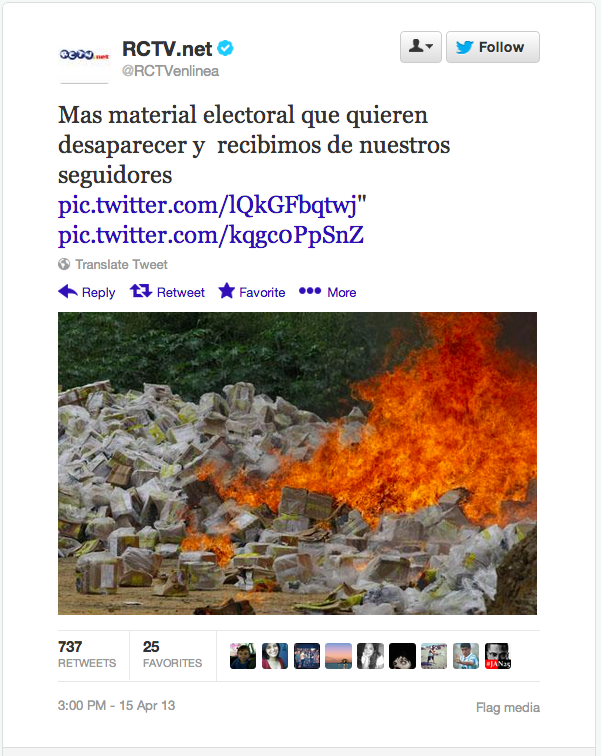 Opposition newspaper El Nuevo País published a similar photo on their front page, with the headline “Lucenazo”, which can be roughly translated as “Lucena’s Coup”, referring to the President of the National Electoral Council Tibisay Lucena. Opposition website La Patilla published other photos that appeared to show electoral material being manipulated by authorities.

The photos were later shown to be false, taken from several years ago when officials were destroying electoral materials from the 2006 and 2008 elections, as mandated by law. Yet the word had already been spread, and many Venezuelans were convinced that the materials were being destroyed. At no time did Capriles make a statement about the falsehood of the various photos and videos circulating on the internet to separate himself from the lies, or to calm his supporters. 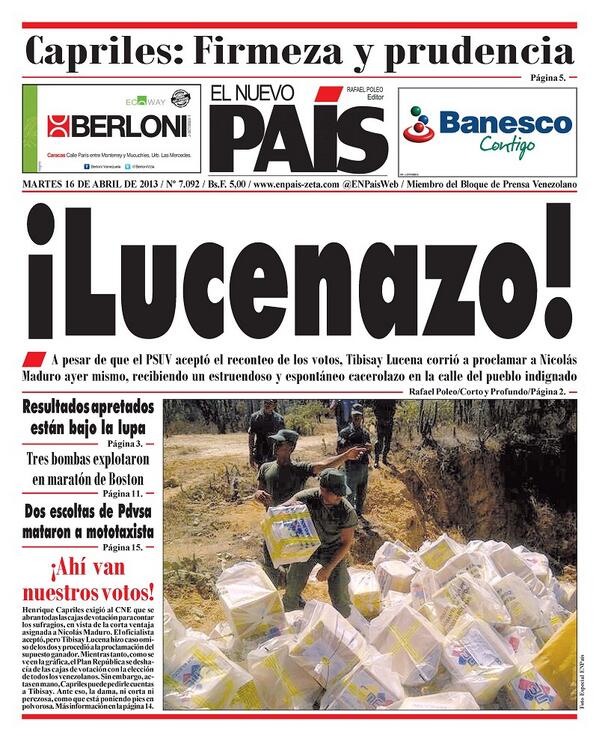 On Monday evening, Capriles called for a press conference with the presence of international media in order to present the alleged evidence of electoral irregularities that his campaign had assembled. Once again, the evidence presented was either demonstrably false, or completely baseless.

First, Capriles cited a high number of electoral machines that had broken down on the day of the elections. He said there was a total of 535 cases, affecting an alleged 189,982 voters. But what Capriles did not mention is that the Electoral Council maintains a reserve of 10 percent of all machines, more than 3,000 extra electoral machines, all across the country so that machines can be quickly replaced if they do not function correctly.

As Maduro’s campaign manager Jorge Rodriguez said, “Only 535 broken machines is actually good news because it is such a small percentage.”

Next, Capriles gave various examples of what he called “irregularities” in the vote count, claiming that these kinds of irregularities were widespread and affected nearly 1,200 different voting centers. However, the only concrete examples he gave are demonstrably false. 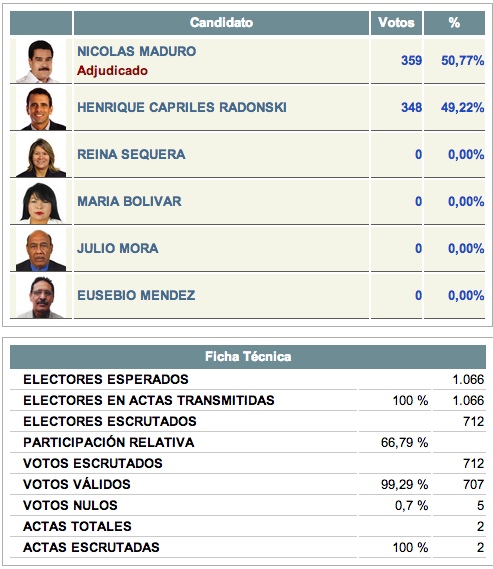 The other examples given were also not irregularities, but simply more manipulations on the part of the Capriles campaign. Various examples were cited of voting centers in which there were much higher vote counts for Maduro than what Hugo Chavez had gotten in 2012. They claimed that this was implausible, since overall Maduro did not get as many total votes as Chavez. However, once again Capriles left out the rest of the story.

The truth was that at these particular centers the vote count for both candidates had greatly increased due to a higher level of total votes in 2013 at these centers. In one example, Capriles misleadingly claimed that the vote count for Maduro had been 530 percent higher than Chavez in 2012. What he did not say was that votes in favor of him increased by even more, by more than 1000 percent (from 7 votes in 2012 to 75 votes in 2013), in that particular voting center. It was the same situation in the other two examples given by the Capriles campaign.

But the lies did not end here. Capriles went on to make several more claims without providing anything more than a fancy piece of paper as evidence. He claimed there had been government propaganda outside more than 400 different voting centers, yet the only photo he provided was of a tent that had the PSUV logo on it. It is hard to imagine how this would cause anyone to change their vote, let alone 270,000 people, which was the margin of victory. He also claimed there had been violence near voting centers, but again there was no evidence that this had affected anyone's vote. 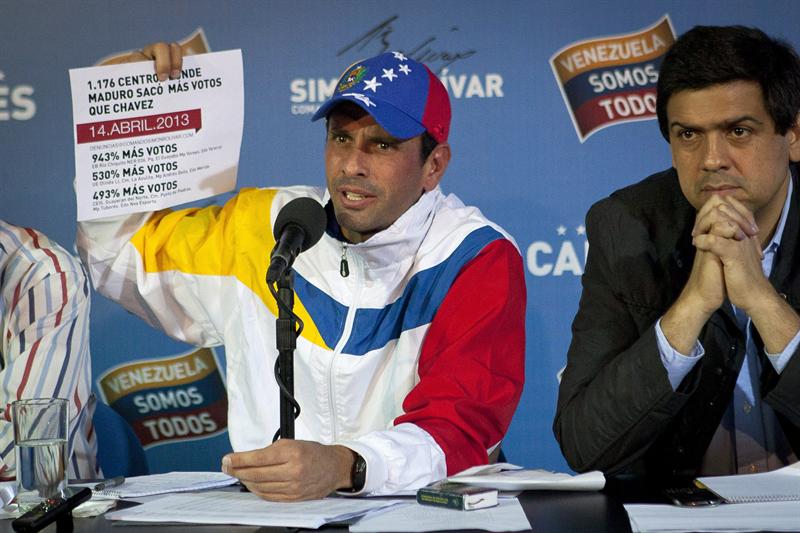 Perhaps the most outrageous claim was that opposition witnesses had been forcibly removed at gunpoint from hundreds of voting centers by government authorities. Capriles claimed that this had happened at a total of 286 different voting centers, affecting over 700,000 voters. However, once again, there was not a single independent report of this happening anywhere in the country on Sunday. Not one video, not one photo, not one media report, not one witness report, not one independent claim, not one person interviewed who had witnessed anything like this on election day.

“It is absurd to talk about this happening at 286 voting centers that according to Capriles include over 700,000 voters. That means we are talking about more than 2,800 voting booths and their respective witnesses. How is this going to happen in so many different voting centers, forcing out more than 2,800 people at gunpoint, in front of international observers, more than 3,800 electoral observers from local NGO’s, thousands of journalists deployed around the country, and thousands of randomly selected voting booth workers? None of these thousands of people said anything about this?”

Finally, it should also be noted that opposition representatives were provided with a copy of the vote tally at every single voting center in which their witnesses were present. As even opposition blogger Francisco Toro has noted, if there really were any fraud in the official electoral results, the discrepancy would show up in the vote tallies that were audited on the night of the elections in the presence of opposition witnesses. If there really were fraud in the electoral outcome, the Capriles campaign would simply have to show where the vote tallies do not coincide with the official vote count. The fact that they have not done this clearly reveals that they do not have any credible evidence of fraud.

Instead, they have chosen the path of lies and manipulation, creating a furor among their supporters with this series of fake examples of fraud, and calling on them to take to the streets to protest what Capriles continues to call an “illegitmate” government. The result has been multiple deaths, dozens of wounded, and several incidents of vandalism and burning of political party headquarters and health clinics, events which Capriles has refused to take responsibility for, or even express regret to the families of the dead. 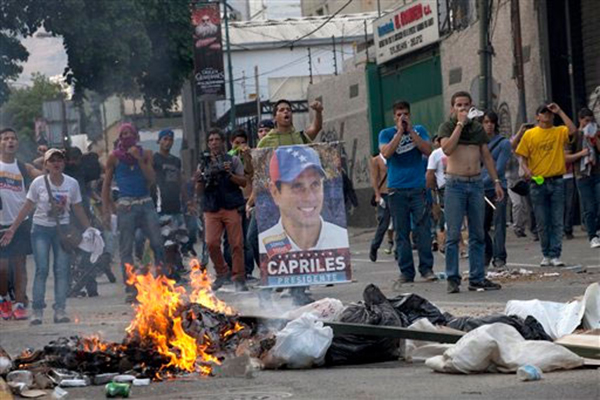 Moving forward, as the CNE conducts a full audit of 100 percent of the votes as requested by the Capriles campaign, it seems unlikely that this will change anything. The Capriles campaign will continue to make false denunciations of supposed “irregularities”, and claim the audit is not transparent. They will use the opposition-aligned media outlets to continue to disseminate fake “evidence” of fraud in an attempt to discredit the Maduro government and the state institutions, and the Venezuelan people will continue to be subjected to one of the most deceitful and manipulative disinformation campaigns since the 2002 coup attempt. We can only hope that a majority of Venezuelans do not fall for the lies, and that those telling the lies will finally be made to pay the price for their abuses.

Apr 28th 2013
Venezuela’s National Electoral Council (CNE) announced yesterday that they would not approve Henrique Capriles’ additional demands for the auditing of the...

Apr 19th 2013
As post-election tensions continue to escalate in Venezuela, Inside Story Americas asks where this political crisis heading.

Apr 18th 2013
Venezuela’s National Electoral Council (CNE) announced Thursday that it would carry out an audit of 100 percent of the votes in last Sunday’s presidential...

Apr 17th 2013
Opposition leader Henrique Capriles has given falsified evidence to support his claims that there was fraud in Venezuela’s presidential elections on Sunday.

Jan 31st 2023
“We ratify our commitment to the defense of human rights and the will to advance in the improvement of the justice system,” said Maduro.
END_OF_DOCUMENT_TOKEN_TO_BE_REPLACED