If anyone is clearest about what Chavez’s absence means and what it could mean in the future, it is the grassroots activists and revolutionaries in Venezuela. While private international and national media paint a picture of hopelessness, economic chaos, a power vacuum and power struggles in Venezuela, the grassroots are experiencing a different reality, and have a much more positive outlook for the future. Venezuelanalysis.com talked to five activists from different areas, who gave their opinion on the impact Chavez’s absence has had, and their expectations for the future. 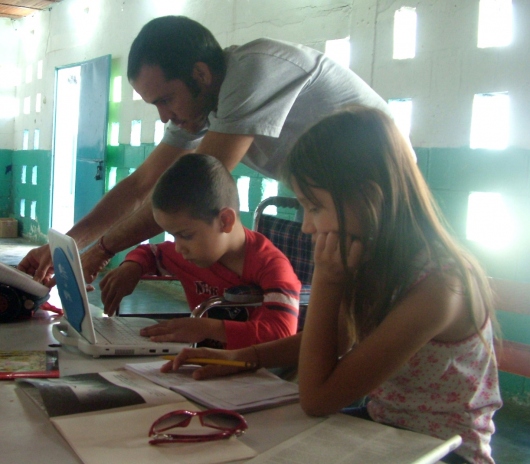 "Well, regarding the regularity at work, it hasn’t changed. Everything in the country is still working the same, the institutions and schools are working, and all economic activity here in the city is normal. I see total normality in daily life, even though the president isn’t here, and despite the seriousness of his illness.

The only thing is speculation and food hoarding, but we know that every time the opposition wants to take advantage of a situation, they hoard food. They always do it to destabilise, so we’re not worried. We should use the Law of Fair Prices, and denounce any hoarding.

In terms of political activity, I think we need to reflect, collectively- in my group, and with others, to establish collective action.

It seems though; the president could come back, who knows when, perhaps in a few months. We are seeing though, that the process of change in Venezuela can’t depend on one person, one supposes that it depends on the people. So organised people, movements and so on- we should organise ourselves, take on our responsibility, and recognise our historic role, and the need for communication and action together.

I do see that there is a lot of hope that the president will recover quickly, and I’ve observed, as I talk with people, that the Bolivarian revolution will continue, even if Chavez, for some reason, can’t take on the leadership of the government.

I see that people are aware. Look, before there was this big unknown thing for revolutionaries and the opposition, and it was; who can lead the government after Chavez. Is there someone who can continue the process? This scenario wasn’t clear for us, it hadn’t been concretely contemplated. Now it is being, and what before was hypothetical, now we see it as something that could be real, and we realise that this process has continuity. Because there is a real leadership that is recognised -the team that has been working with the president. And the people recognise now that the process depends on us.

The slogan, ‘Chavez somos todos’- We’re all Chavez-  now it’s not mere words, it expresses what I’m saying, the consciousness of the people that with this process, there’s no going back." 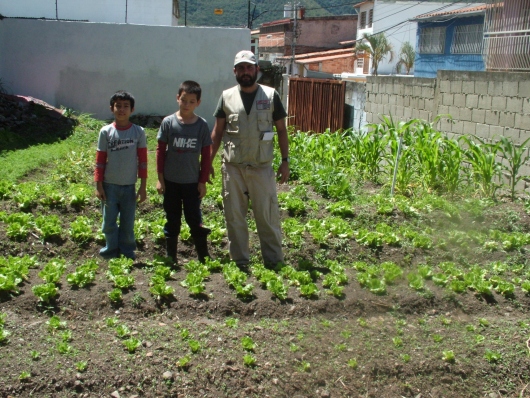 "There’s always uncertainty, but we keep working. Chavez is a leader, obviously, and we had a slogan: “Con Chavez todo, sin Chavez nada” (with Chavez, everything, without Chavez, nothing). And we’re called to reflect on this, because it’s dangerous. The panorama isn’t well defined. We have to realise that we were going to arrive at this point eventually. To just depend on one man was to condemn the revolution to failure.

So the moment we expected was brought forward. And the issue of unity is something that is worrying, because Chavez was part of that. But we should take advantage of this challenge. There’s a government that is governing, but morale is higher than ever and we want to work even harder. There’s higher commitment right now because we were used to him (Chavez) being there, leading everything.

For an example, as an institution (The Agriculture Mission of Venezuela- Urban Agriculture wing), we’re actually working harder, we have a plan and projects. That doesn’t mean that Chavez isn’t indispensable, but everywhere people are working. Unlike other years when we took a while to get going, we started early this year, thinking about how we’re going to apply the Socialist Plan 2013-2019.

In terms of the future, well... before we were consumed by triumphalism. There’s a trust of Maduro, but now in elections we’ll have to work hard. That’s a good thing. Before there was laziness, the belief that Chavez would do it.

Chavez will be a spiritual leader. People ask what will happen after him, who comes next. Well, it’ll still be Chavez, with Maduro speaking for him, and it’ll be the people, with the spiritual leader of Chavez, no one else." 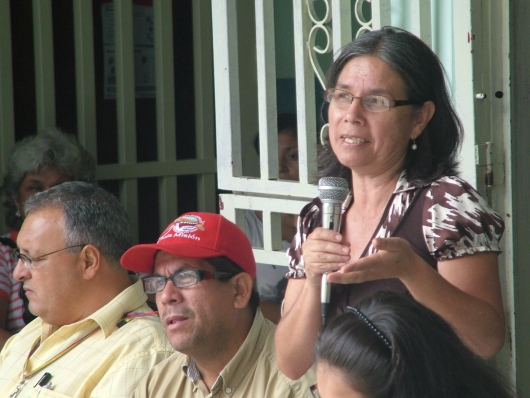 "Yes it [Chavez’s absence] has affected us, mostly because we’re worried about his health. And we’ve been worrying about if the people are prepared to continue when he’s not here. But with the last few marches that have happened, it’s been shown that the people do know how to react well, have matured.

Now, I see that we have to consolidate and organise a plan to confront the opposition, becomes stronger, and I do think we’ll be able to do that, in order to not lose what we’ve gained.

Attendance at communal council meetings has been slightly lower, maybe because people think that thing’s might not go on if Chavez isn’t here. But little by little, working hard, we’ll show that they will go on. Because things can’t depend on just one person, we have to mature in that sense.

Consolidating the revolution, and all its achievements, keep working- I think that’s what Chavez expects of us. Of course, we’d like him to be here, and emotionally, in December, we were affected, were sad. But we also know that Chavez is human, and whether he can continue now or not, we have to understand that for whatever reason, one day he might not continue. We have to be prepared for that.

The opposition believes that when Chavez as a person disappears, the revolution is over, and we have to show them that it’s not like that."

Jairo Calderon – University student, a leader of the Communist Party of Venezuela youth 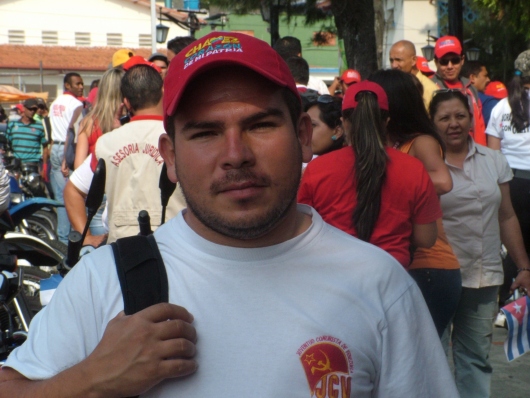 "The party (Communist Party of Venezuela- PCV) has always been with Chavez, despite all the attacks we’ve received- from the right wing, and within the revolution. We still support Chavez, whether he’s here or not, it’s not that he’s indispensable, but we’ll keep working.

The idea of ‘con Chavez todo, sin Chavez nada’, it’s a joke, people make revolution, not one person. Our work is to make sure people don’t get demoralised.

Chavez often functioned as mayor, governor – he did a lot that the bureaucracy should have been doing. But the president has other functions. People don’t trust a lot in the circle he has around him, don’t feel the same affection for them. There could be a political breakdown for having invested so much in Chavez.

So there are a number of possible scenarios: Chavez returns, and later decides who will be the [PSUV] candidate [in possible new presidential elections], or if he physically dies, the PSUV should call a national congress and decide who will be the candidate." 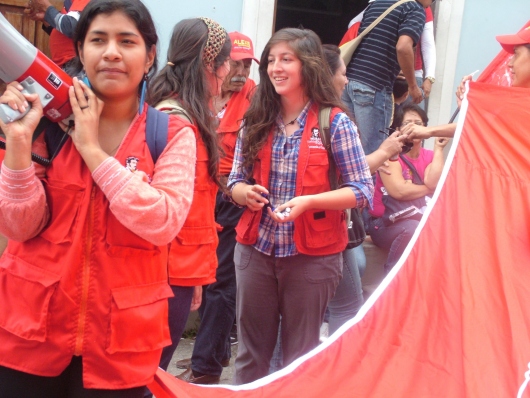 "At the moment in Venezuela, we have a lot of ally countries, and that’s fundamental, because we know we’re not alone, and the construction of a better country isn’t just our work, but Latin America’s .

Chavez’s absence has affected us at Mission Ribas, however we know, and it’s not a secret for anyone, that united we’ll be a take off point for the revolution. Even though those of us who make up Mission Ribas are very young, we have the political, intellectual, and economic capacity to support and develop this revolutionary process.

We know the president won’t be around forever, but his thoughts, ideas, his spirit to go on, are eternal.

Mission Ribas began in 2003 as the result of an idea of President Hugo Chavez, and we’ll keep working with a lot of enthusiasm- more than ever- and with humility above all.  Education is fundamental, we should work, and study a lot, fill ourselves with knowledge so that we can transform the human being, the collective, and our communities.

This process has been strengthened, and so we know it will continue, but it will be along a firmer path. In the next period, 2013-2019, the revolution will continue being strengthened. Of course, people who always have to pursue a particular interest, such as corruption, will still be around, however we feel confident that what has been created until now will continue functioning and improving."

*Mission Ribas is the program for teaching high school level studies to those who have missed out.

Feb 4th 2013
Venezuelan analyst Nicmer Evans argues, "The construction of a socialist project must transcend every one of us, and cannot be circumscribed to the existence...

Jan 23rd 2013
The vice-president and ministers marched with up to a million people today to defend the Bolivarian revolution on Democracy Day, while the opposition march...

Jan 21st 2013
Venezuelan President Hugo Chavez is entering a new phase of his recovery, according to Vice President Nicolas Maduro.

Jan 8th 2013
Over the last few weeks the private English language media has stepped up its campaign against the Venezuelan revolution, spreading a number of lies and...