Caracas, August 4th 2013 (Venezuelanalysis.com) – At political rallies held yesterday in separate areas of Caracas, supporters of the government and opposition demonstrated against corruption, inefficiency, and politicians of the other side.

The demonstrations were convened following a vote in the National Assembly (AN) on Tuesday to remove the parliamentary immunity of legislator Richard Mardo, the likely opposition candidate for the mayoral post of Maracay in Aragua state, following accusations of tax fraud and money laundering.

That day, opposition leader Henrique Capriles called for a concentration on Saturday to “show that the new leadership [of the opposition] is undaunted against the corrupt ones [in the government].” AN president Diosdado Cabello later convoked a government march, also for Saturday, which he wrote would “put things in their place: the opposition will march in support of corruption; the Chavistas will march to fight against it.”

At the opposition gathering, held in Los Ruices in eastern Caracas, Capriles appeared with Mardo, AN opposition Deputy Maria Corina Machado, also accused of corruption, and current mayor of Caracas’ Sucre district, Carlos Oscariz, to protest the government which he said was “already over.”

“This revolution is over. I'm not here to ask the government to rectify itself. No. I'm here to tell you that we need to move away from this government, because this situation is not going to change,” he said.

He added that the path for this change would need to be “peaceful and constitutional … [since] change is achieved through the support of the people.”

Meanwhile, government supporters marched west from Plaza Venezuela to Caracas’ Plaza Bolivar, in an event that President Nicolas Maduro announced would “give face to the support for honesty.”

“I call on all the people of Venezuela to combat capitalist corruption, wherever it is, within the corrupt rightwing or in a Chavista traitor who falls victim to it. At each moment, there are more Venezuelans who, though they represent the minority and are against the Bolivarian Revolution, are orphans of true leaders who tell them the truth, who act with honesty. I invite them to the democratic struggle … and I say to them that we are here,” he said.

At the pro-government rally, Jesus Mendoza (below) told Venezuelanalysis, “These people who want a new government, they don’t know that they’re up against a people that are too large, too humble … Here we have people moving forward, who have supported this government for quite some time. That’s why we say that those who want a new government will never return to power. These corrupt people have to get out. This legislator [Maria Corina Machado] has dollars, a lot of money. Where does it come from? You think that the salary of a legislator gives you that type of money? The same with the [former] governor of Zulia [Pablo Perez]. You think that a salary of a governor gives you so much money that you can buy so many goods?”. 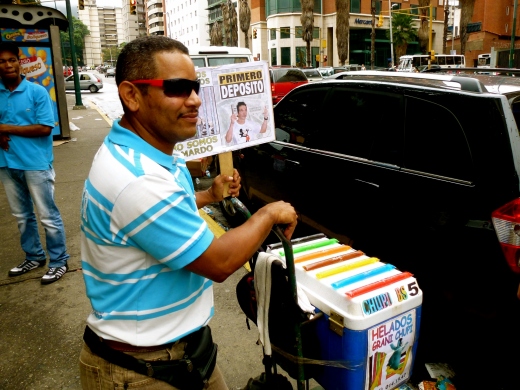 “This event, for us, is transcendental, it’s transformative, because we as revolutionaries have to recognize that corruption is also in our ranks. And we’ve said, we’re against corruption,  whether it’s our supporters, or those of the opposition. But, primarily, we’re against all of the corruption that has been committed by the legislators of the National Assembly (AN), that goes against our values. They are corrupt, and we know that. It’s not that the president of the AN [Cabello] recognizes it; it’s not that the president of the Republic [Maduro] recognizes it: it’s that we, the common people, who are poor, who know day-to-day that we have to activate ourselves in a municipality that’s in their hands, the municipality of Sucre [governed by Oscariz], we know what they’re doing. That’s why we’re here,” government supporter Martha Benavides (below, centre), said. 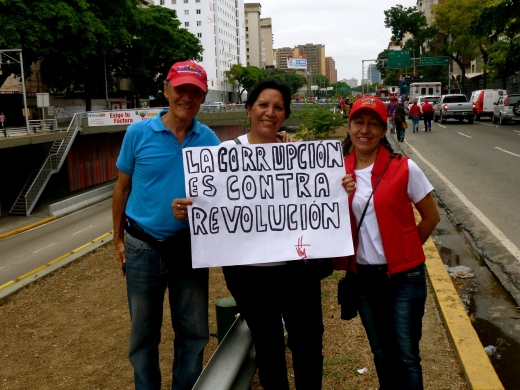 “This is an event in support of democracy, asking for respect for the law, the right to have health, to have personal security, judicial security, which don’t exist in the country. We’re dying here with a corrupt and delinquent government, which doesn’t help the people. The minimum salary is a little more than 2,000 bolivars, and we should get at least 30,000 per month because [2,000] is not enough… This is an event asking for a change for Venezuela. What’s most troubling for us right now is insecurity, and scarcity,” Noel Zambrano told Venezuelanalysis.com at the opposition rally. 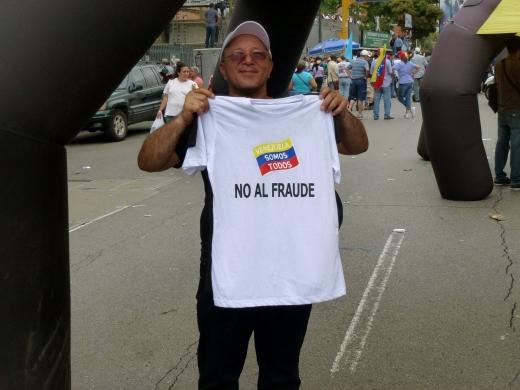 “We’re protesting the high cost of life: all items of basic necessity have increased in price. Our salaries aren’t enough. The most important thing that worries us is that we don’t know exactly what nationality the current president has. They stole the elections from us; from three elections back, they’ve stolen the elections from us. But since they have the power, we haven’t been able to concretely prove how they’ve stolen the elections. But in the streets, we’ve realized that we’re now the majority… This is a disguised dictatorship. They say that this is a democracy, but we can’t think differently from what they say, from what they think, we can’t criticize, we can’t go out into the street; I can’t wear a hat of a certain color,” opposition supporter Cristina Castillo said (below), while at the concentration. 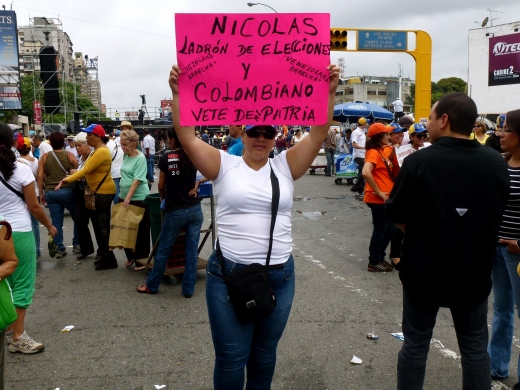 Aug 1st 2013
The owner and editor of one of Venezuela's largest newspapers has stated that a freeze on his personal bank accounts will not affect the paper.

Jul 31st 2013
After a debate in the National Assembly yesterday, the president of the assembly, Diosdado Cabello, announced that the assembly had removed opposition...

Jul 24th 2013
Eduardo Saman, president of price control and consumer protection agency Indepabis, had some of his authority revoked after he replaced many regional...

Nov 28th 2022
VA columnist Jessica Dos Santos reflects on a banking system that is very much tilted in favor of larger companies.
END_OF_DOCUMENT_TOKEN_TO_BE_REPLACED