The agreement, announced by Minister for University Education Pedro Calzadilla, will see 25% salary increases for Sept. 1 and Jan. 1, 2014, in addition to a 25% increase that will be implemented retroactively from Jan. 1, 2013 (AVN)

The agreement, reached by the Table for Negotiation of the Collective Bargaining of the University Sector after weeks of discussion, will see a 25% salary increases for September 1 and January 1, 2014, in addition to a 25% increase that will be implemented retroactively from January 1, 2013.

“We reiterate that this is a responsible government, a government that sticks to its word and advances through democratic mechanisms,” Calzadilla told public television station VTV on Friday night.

“We believe that this contract will continue to generate discussion, and that it will be an example for the discussion of collective contracts in Venezuela, with the concept that President Maduro has proposed: an integral salary,” he said.

In an announcement on Saturday, Maduro expressed his approval for the agreement, which he said had been achieved through conversations with numerous workers’ federations representing “the vast majority” of those involved.

“With the exception of some union leaders of the rightwing who believe they can overthrow the government, university sector unions have participated with the highest ranks of the government,” he said, adding that, “Never before has this happened, an education minister speaking directly with the leaders and representatives of the workers and the professors.”

Despite the announcement, the Federation of University Professors Associations of Venezuela (FAPUV), which has led strikes at several universities for over a month, indicated that its protests would continue.

The Federation’s President, Lourdes Ramirez, claimed that the group was “completely unaware” of the agreement, and that the salary increases did not consider the current levels of inflation.

On Friday, a group of students and professors from various universities in Caracas marched through the city to protest the Federation’s strike, calling it an “opposition tactic to destabilize” the government.

“This is a federation that does not represent the majority of Venezuelan universities, and it hasn’t taken into account the students, nor the workers, nor the large amount of professors who are outsourced or under contract,” President of the Center for Students of Education at Caracas’ Central University Jhonatan Sayago said during the march.

Among the demands of the Federation, which voted its strike as indefinite on May 30, was an increase in salaries of 100%.

Below: Details of the agreement reached between the government and university representatives (AVN) 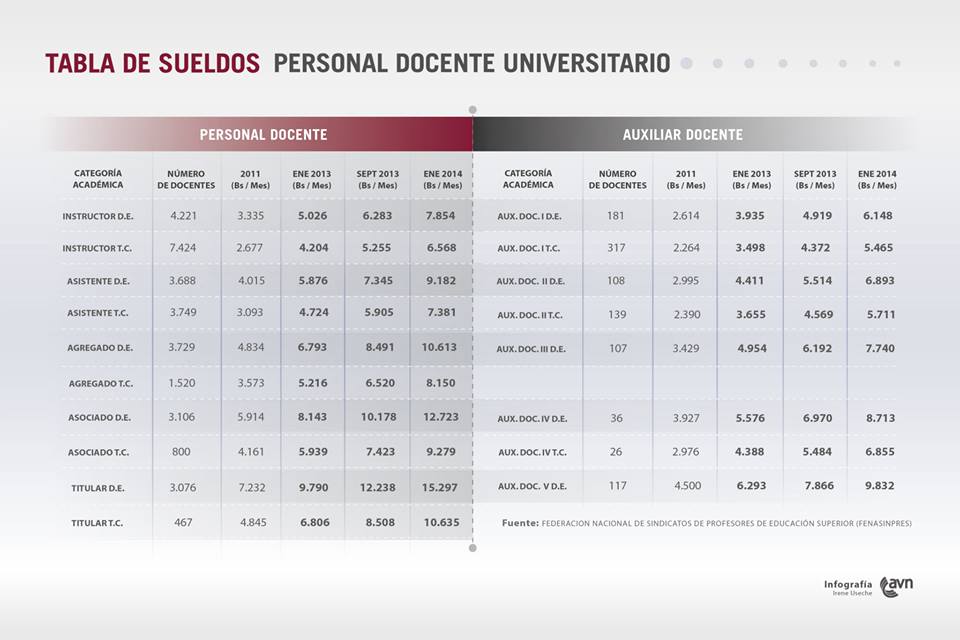 Jun 18th 2013
In this series of short interviews by Merida based community television station, TatuyTv, university teachers and students argue that the university strikes...

Jun 10th 2013
In an effort to achieve wage increases, professors at 13 universities across the country have gone on strike, bringing university operations to a halt.

Jan 14th 2022
A Venezuelan economist discusses the impact of the economic war on the Venezuelan people and the policies that should be implemented in the face of it.
END_OF_DOCUMENT_TOKEN_TO_BE_REPLACED