Guayaquil, Ecuador, July 8, 2021 (venezuelanalysis.com) – Over 200 Venezuelan campesinos and allied activists rallied in Caracas against threats to change the country's historic Land Law and to demand justice in the countryside.

On Wednesday, 21 rural organizations, joined by a number of Caracas’ social movements, staged a protest in front of the National Assembly (AN) building, rejecting recent government overtures to Venezuela's Cattle Ranchers Federation (FEDENAGA), a powerful landowner guild pushing for a reform of the 2001 law.

Likewise, the peasants' organizations denounced the lack of support for small and midsize producers, who largely depend on state-led seed and fertilizer supply chains, leaving them in the hands of illegal smugglers. Venezuela’s small farmers cover an estimated 70 percent of the country's food demand.

The rural workers’ movements also stressed ongoing problems faced in the countryside, including unjustified evictions, harassment and judicial persecution by police and other state security organs allegedly at the service of local landowners.

Furthermore, the organizations demanded justice for over 350 targeted killings since the approval of the 2001 Land Law, reportedly by hired gunmen.

The rally was followed by a Twitter storm with the hashtags #LaMarchaSigue (“the march continues,” in reference to the 2018 Admirable Campesino March) and #LaLeyDeTierrasEsDelPueblo (“the Land Law belongs to the people”), with a number of organizations tweeting their support. "We defend the Land Law against latifundio [large private estates], unjustified evictions, and the criminalization of campesinos,” wrote human rights collective Surgentes. 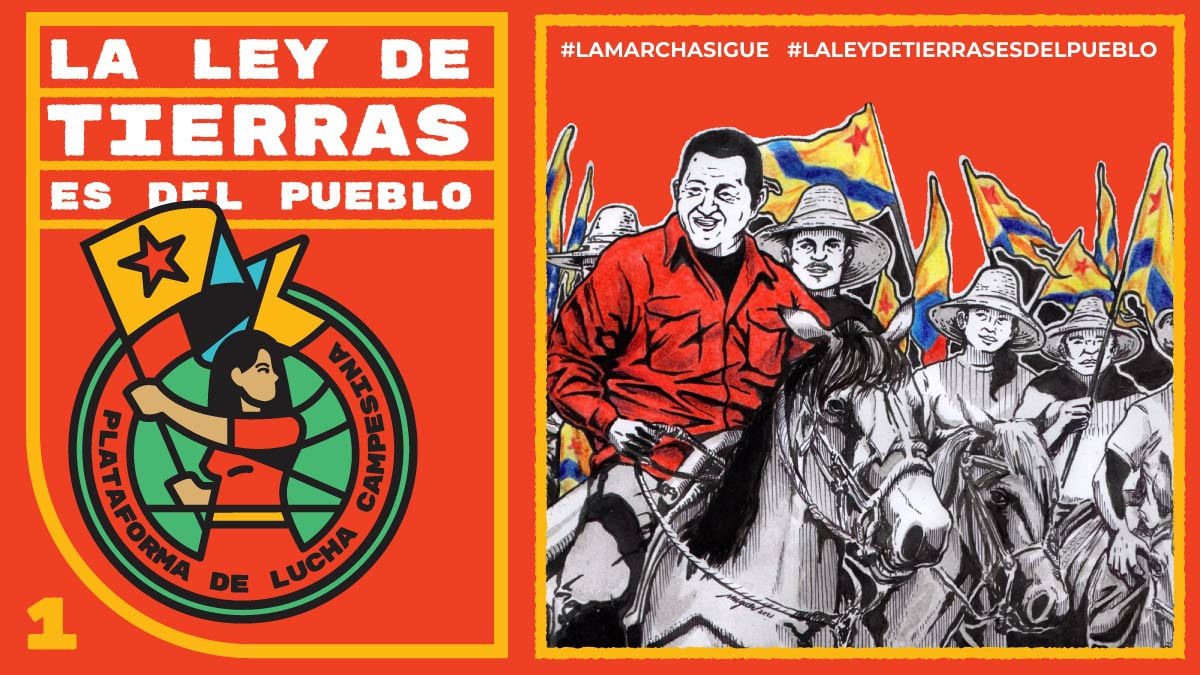 Artwork in support of the campesino rally. (Utopix)

The landmark Land Law is considered one of the Bolivarian Revolution’s most important legal instruments. Created by the former Hugo Chávez government in 2001, the law addressed land ownership inequality by laying down conditions for unproductive plots to be rescued by campesinos. The legislation led to the rescuing of over 60 percent of the country’s large idle estates. Land titles were progressively provided to small and midsize producers working the lands, but with less frequency in recent years.

The Land Law, alongside the Hydrocarbons Law, were the main catalyzers for the 2002 coup attempt and the subsequent lockdown of the oil industry. With their interests under threat, the FEDENAGA cattle ranchers federation and the FEDECAMARAS business guild were among the main actors behind the destabilization efforts, which then continued in the countryside.

“Since 2001 we have had a bloodshed of more than 350 peasants,” explained Andrés Alayo, one of the key spokespeople of the Campesino Struggle Platform, to Venezuelanalysis.

The rural leader stated that the campesino sector would remain vigilant to defend the Land Law in order to secure food production for the country’s population. “The Land Law allows the democratization of access to the land and, above all, reaffirms national sovereignty,” he said.

Alayo went on to say the “social function of land is guaranteed in the law and in the Constitution,” with the state responsible for assigning lands for production and not as commodities. “The oligarchy wants to establish private property so that land speculation and property accumulation exist once more,” he argued.

The country's popular sectors have expressed concerns with the Maduro government’s increasing approaches to the private sector amidst the nation’s economic crisis and US-led sanctions, with campesino movements pointing the finger at a “landowner offensive” in the countryside.

However, Alayo told Venezuelanalysis that Wednesday’s protest garnered positive answers from the National Assembly’s Vicepresident Iris Varela and the country's Vicepresident Delcy Rodríguez, after holding separate meetings with both. "We were assured the Land Law is untouchable. For us, this is a popular victory.”

In addition, the campesino spokesman said authorities pledged to advance 188 out of 194 judicialization cases, as well as 18 from 25 targeted killing cases between 2018-2021. Likewise, the 21 organizations requested a high-level commission to accelerate the investigations of all the campesino murders since 2001, the majority of which have gone unpunished.

The judicialization and assassination cases were brought to the government in the historical 2018 “Admirable Campesino March" which saw campesinos walk over 400 km from rural heartlands to Caracas. They rallied again in 2019 after the mediation workgroups delivered few concrete answers.

Alayo added that authorities had also compromised to channel the countryside communities' demands through the AgroVenezuela social mission, improve living conditions in rural areas and launch a national plan to purchase small and midsized farmers' production.

“The campesino movement’s united front achieved significant advances, but the fight continues to improve living conditions in the countryside and until impunity ceases to be the norm,” stated Alayo.

The Campesino Struggle Platform’s rally was not the only one in Caracas on Wednesday, with a number of sugar cane producers from eastern Sucre state denouncing the Cumanacoa Sugar Mill company’s continuous fraud after not receiving 80 percent of the agreed-upon payment for this year's harvest.

The rural workers, backed by local communes, said more than 400 families were affected and demanded prompt solutions, including transferring the sugar mill to campesino and communard control. Sources told Venezuelanalysis the cane producers met with Sucre deputies and the sugar plant's director, who reportedly pledged to pay the debt.

Edited by Ricardo Vaz from Mérida.

May 2nd 2021
Local communes and the Communard Union have joined the demonstrations in Sucre State.

Oct 20th 2020
The Popular Revolutionary Alternative looks at one of the most intense land struggles currently in the country.

Aug 2nd 2018
After 20 days walking 435 kilometres, the marchers held a fiery televised meeting with the president, finally being able to present their proposals to the...

Jul 28th 2021
Mexico has proposed a new regional body to replace the OAS, where regional issues can be addressed.

Jul 28th 2021
With Venezuelan government envoy Alex Saab fighting extradition to the US, Joe Emersberger tackles the corporate media coverage of the case and US sanctions.

Jul 27th 2021
In this exclusive, Venezuelan analyst Danna Urdaneta asks why both Caracas and Bogotá have maintained a strict pact of silence over the murder.
END_OF_DOCUMENT_TOKEN_TO_BE_REPLACED

END_OF_DOCUMENT_TOKEN_TO_BE_REPLACED

Venezuela Celebrates 200 Years of the Anti-Colonialist Battle of Carabobo