Venezuela’s voting system has both a digital tally and a physical receipt tally. (El Impulso)

Venezuela's election process has been lauded by numerous organizations and observers not only for its high turnout, but also for the transparency and checks involved in the voting and scrutiny.

Former U.S. President Jimmy Carter said: "Of the 92 elections that we've monitored, I would say that the election process in Venezuela is the best in the world." 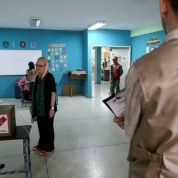 Below are all the elements involved in the vote.

Venezuelans who are 18 years of age or older are eligible to vote in an election, after registering.

Venezuelans living abroad who have a resident or permanent visa and who have registered at their nearest embassy or consulate are also eligible to vote at voting centers which will be set up at all of Venezuela’s diplomatic missions across the world on May 20. Foreigners living in Venezuela with a resident or permanent visa are legally entitled to vote in local and regional elections, but not national elections. This means that on May 20 foreigners living in Venezuela under these visa conditions will be able to vote for their state councilors, but not for the presidential elections.

Article 63 of the constitution says: 'Suffrage is a right. It is exercised through free, universal, direct and secret ballots. The law will guarantee the principle of individuality of suffrage and proportional representation.'

All registered Venezuelans need to vote with their national ID card with their unique ID number, photo, and fingerprint on. The card can even be expired. Rumours that voters need to present other ID such as the Homeland Card are false.

Venezuela's elections utilize the latest in secure voting technology to ensure that each vote is counted fairly and cannot be tampered with. It was the first in the world to use voting machines that print a receipt so that each voter can confirm their vote with a physical backup.

The current voting machines in use are the Smartmatic Auditable Election System (SAES) by Smartmatic, which are 100 percent auditable at each stage.

Smartmatic, a British based multinational who denounced the July 2017 electoral process, was responsible for overseeing the hardware of the voting machines, and never had any contact with the software nor the transmission nor totalisation of votes, rendering its claims in 2017 obsolete. It is no longer contracted by the CNE to maintain the machine's hardware.

The final vote count is confirmed with the physical vouchers that voters put in the receipt box, and then transmitted electronically through a network isolated from the internet and any computer to assure that no interference can occur.

Electronically, votes are stored on the machines in a random order to avoid sequence counting of voters.

The vote will be witnessed and audited by international and national political observers, technicians and political organizations. The National Electoral Council has invited the United Nations and the Caribbean Community (Caricom) to send representatives to observe the process, with the former refusing to send observers as they did not deem it necessary. International observers will be present in roughly half of Venezuela’s 23 states. On election day they will observe the setting up of the centers, the preparation of the machines and the software, the voting process, and the final totalisation.

These are the five steps involved in voting in Venezuela:

1. When arriving at a poll, voters are directed to the voting table that corresponds to them. At the table, there is a list with voters' identification card numbers to allow a person to confirm their table. This is an anonymous process by number with no names involved. Venezuela has one of the highest rates of center per voters in the world, with roughly one voting center per 500 residents. 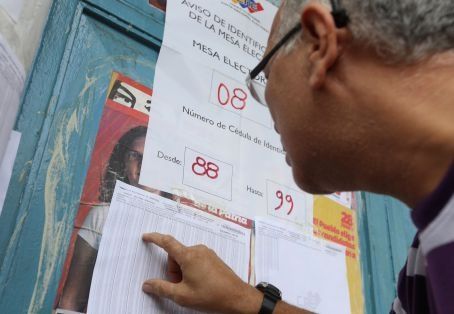 2. The voter then goes to that table to present the document that confirms their identity. Pregnant women, the elderly, disabled, public emergency workers (firemen, policemen, etc) are given priority and do not have to queue. The voter then places their index finger or thumb on a fingerprint scanning device which checks that the person present in the center corresponds to the fingerprint on the ID card. 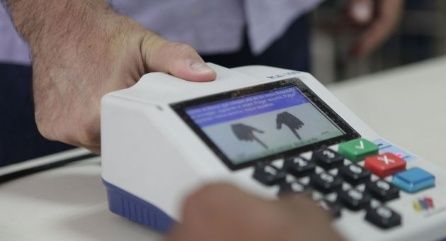 3. Once their identity is verified, the voting machine will unlock so that the voter can choose the option of their preference. Voting is on a touch screen machine behind a screen. Once selected, the choice can be changed up until the 'vote' button is pressed.

In case there is any doubt about the voting process, the election official explains the steps involved.

After selecting their preferred option, the voter should press the 'vote' button. The machine then prints a receipt of the vote for the voter to read and confirm.

The voter has three minutes to vote. After two minutes of inactivity the machine makes a noise to remind the voter that one minute is left. The only way to vote null is to let the three minutes expire. 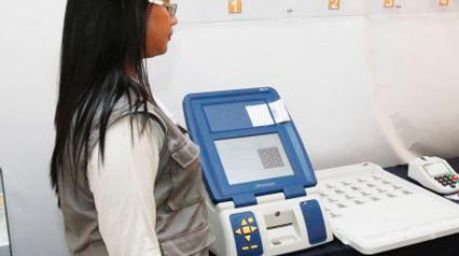 4. The voter then deposits this receipt in the corresponding ballot box which is usually placed in the center of the room under constant observation by the CNE staff and all parties’ political witnesses at every booth. 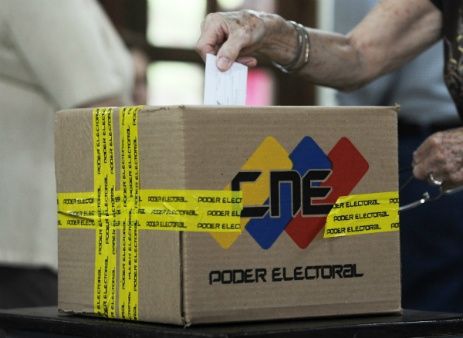 5. Finally, the voter signs and places their fingerprint in the elections roll to confirm that they have voted.

Polls are closed at a polling station at 6 pm unless the CNE extends voting periods, and only after everyone in line to vote has voted.

Once tally scrutinization on the machine finishes, a random paper ballot audit is announced where the machines to be audited are randomly selected drawing numbers, and the machine's serial number is recorded. 53% of all voting machines in the country are audited on voting day before totalisation. This audit is public (a citizens audit) meaning that members of the community can come into the voting center to observe and corroborate the process. The audit checks totalisation tallies per candidate between the electronic result and the physical paper receipts in the box which is now opened. Venezuela is the only country in the world which does an on-the-spot audit after centers have closed.

The audit report is signed by election poll staff and observers from each party present, then sealed and handed to the military for delivery to the CNE.

Copies of the report are handed over to the representatives of the two highest vote-getters.

Finally, machine tallies are transmitted to the CNE central totalisation offices through either secure feeds using Venezuela’s satellites, or through a secure feed set up with a unique modem which is provided with the voting machine.

Venezuela’s voting system is completely safeguarded against any possible problem or scenario. Voting machines have inbuilt spare batteries, spare machines are stored close to every voting center. There are written and authorized protocols for rare situations like voters who can't leave their fingerprint due to missing the corresponding fingers, or voters who need extra assistance to vote such as the disabled or extremely elderly. Every scenario has been thought of and an inclusive process established to make maximum voting possible.

Sep 12th 2018
The majority of these are opposition parties, which will contest municipal council seats with the Chavista groupings.

May 19th 2018
Venezuelans will go to the polls on Sunday under dire economic distress with inflation expected to reach over 10,000%. Professor Steve Ellner says US has...

May 15th 2018
"We refuse to be victims of a media disinformation operation," reads an online petition.

May 7th 2018
The pastor is definitely an underdog in the race, but could a regional upsurge in evangelicalism spell an upset for the frontrunners?

May 3rd 2018
As the opposition’s leading horse in the race, is the ex-Chavista the man to oust Maduro?

Apr 23rd 2018
Campaigning got underway this Sunday for both the presidential as well as state and local council elections which are due to be held May 20.

Mar 2nd 2018
The government and electoral opposition have agreed to push presidential elections back until May 20.

Sep 22nd 2022
Vice-President Tareck El Aissami announced that Venezuela was seeking the arrest of 23 individuals over their alleged involvement in corruption at Monómeros.

Sep 21st 2022
Venezuela is currently unable to repair electron microscopes, crucial to diagnose diseases, due to US sanctions.
Sep 20th 2022
We look at the restoration of diplomatic and economic relations between Venezuela and Colombia in our latest podcast episode.
END_OF_DOCUMENT_TOKEN_TO_BE_REPLACED