The Communist Party of Venezuela held their 14th National Conference this weekend to evaluate their endorsing of President Maduro’s candidacy for the upcoming elections. (PCV)

Merida, February 20, 2018, (venezuelanalysis.com) -  The Communist Party of Venezuela (PCV) and  the Homeland for All (PPT) party held national congresses this past week to evaluate whether to back President Nicolas Maduro’s reelection bid on behalf of the governing United Socialist Party (PSUV) .

Both parties appeared to tentatively opt for giving the alliance another chance, without discarding the possibility of launching a separate candidate should negotiations with the PSUV break down.

The PCV’s 14th National Conference resolved to “push for a broad coalition of political and social forces” as part of a “unified PSUV-PCV pact” which could lead the Marxist-Leninist party to endorse Maduro’s candidacy.

The conference did, however, make it clear that “if it is not possible to subscribe to such a pact, a new session of the Conference will be called as a consequence to decide on the candidate of the PCV”. After its four-yearly congresses, national conferences are the highest decision making organs in the PCV. 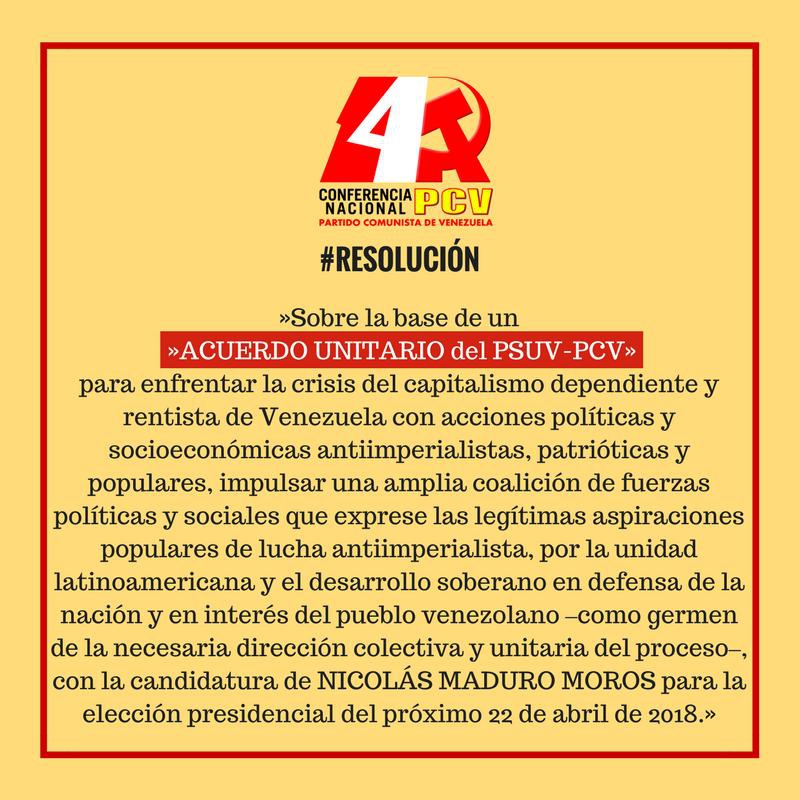 Without making public the details of the proposed electoral agreement, PCV General Secretary Oscar Figuera, stated that a “draft” has already been given to the governing party.

He also emphasized that the PCV have held bilateral meetings with the PPT, the Revolutionary Workers Party (PRT), the ‘Class Struggle’ movement, and the National Antiimperialist and Antifascist Front (FNAA), as well as four meetings with the PSUV in which the PCV presented “our critical vision of the way the government have dealt with the (current) crisis”.

Whilst declaring the results of the conference, Figuera listed a number of measures which the PCV believes should form part of a “revolutionary way out of this crisis of capitalism”. They include nationalising the banks, the distributive chains (especially for food produce), and foreign commerce, creating a collective leadership in the revolutionary process, reviewing the management of state-run industries, increasing participation of the workers in the productive processes, a wide-reaching tax reform, and reviewing the political participation of popular sectors in elections.

Figuera did not, however, clarify if these proposals were included in the draft of the PSUV-PCV agreement.

The 299-delegate conference held a “deeply democratic… polemic, tough, and fruitful debate,” explained Figuera, which “strengthened and unified the party… in the collective construction of our policies”.

The PCV approved their conference document entitled “The social-economic and political situation of the current capitalist crisis in Venezuela, a revolutionary solution and the tasks ahead for the PCV”, in which strong criticisms of the government’s domestic policy, and especially their economic handling of the current crisis, are detailed.

Homeland for All (PPT)

In similar measures, the PPT party declared that they are to “continue to work on a consensus, which is connected to a political program and conceptual definition, for an eventual electoral alliance”.

“Following a long conference in which each regional delegate presented their reports and the debate had been concluded… we decided to delegate (this task) to the National Leadership,” explained Ilenia Medina, national organisational secretary for the PPT.

Medina explained that such an electoral alliance, “must advance towards the strategic objectives of creating a new state, advancing on the socialist model, and with policies which allow us to defeat the economic war, such as the overcoming of the brutal speculation, promoting national production, and the creation of a network of popular kitchens.”

Medina left the country in some doubt as to whether she referred to a potential PPT-PSUV alliance, or a possible PPT-PCV alliance. In Venezuela’s municipal and regional elections, the PPT and PCV deepened already strong bonds by challenging PSUV candidates from a leftist position in numerous parts of the country, such as in Simon Planas municipality in Lara state, Libertador municipality in Caracas, and Barinas municipality of Barinas state. They have, though, always achieved an electoral alliance with the PSUV for presidential elections.

Under electoral rules, all political parties have until the 27th February to register their precandidates for the presidential elections. Thereafter, in what is often a complicated process of alliance forming, each party has until March 2 to legally substitute them for another registered candidate.

Mar 7th 2018
Hear the perspectives and opinions of VA members on the upcoming presidential elections in Venezuela in the first episode of our monthly podcast!

Mar 1st 2018
In the eighteen-point document, the Communist Party and the ruling Socialist Party vow to take decisive steps to deepen Venezuela's Bolivarian...

Feb 27th 2018
The United Socialist Party of Venezuela and the Communist Party reached an agreement Monday.

Feb 26th 2018
Why is Chavismo still so popular amid Venezuela's worst economic downturn in decades?

Jan 30th 2018
The president's largest left-wing allies, the Communist Party and Homeland For All Party, have called national conferences to allow their membership to...

Jan 10th 2018
The Communist Party warns Venezuela could be headed towards a social explosion if the Maduro government fails to take decisive steps to improve the conditions...

Feb 14th 2017
The parties condemned the process as a veiled attempt to clamp down on small political organisations.

Aug 1st 2021
VA columnist Ociel López takes a look at the opposition’s motivation to participate in new rounds of talks with the government.

END_OF_DOCUMENT_TOKEN_TO_BE_REPLACED

Venezuela Celebrates 200 Years of the Anti-Colonialist Battle of Carabobo