Caracas, July 11, 2017 (venezuelanalysis.com) – A bomb exploded in Caracas and three people were killed Monday, during a ten-hour blockade of the nation’s streets called by the Venezuelan opposition.

Dubbed the “roadblock against the dictatorship”, the day of action is the latest in a string of anti-government protests called by the opposition since early April with the aim of ousting the national government.

The wave of violent anti-government unrest has been characterized by attacks on government supporters, public lynchings, roadblocks to paralyze the country, and assaults on state institutions. More than 100 people have been killed in the turmoil to date.

On Monday, violence in the capital reached new levels with the detonation of what officials are calling an explosive device in the wealthy eastern district of Altamira where the unrest has been concentrated. 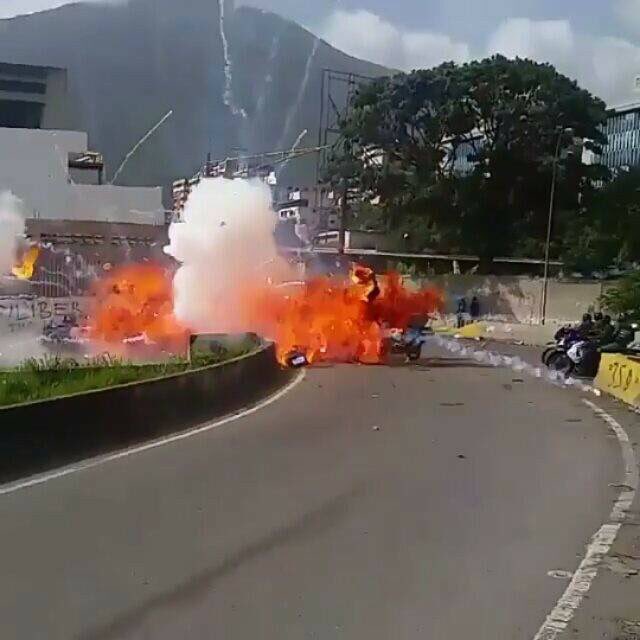 On his Twitter account, Justice Minister Nestor Reverol said that the detonation was a deliberate attempt to ambush national guard soldiers.

According to Reverol the officials were on patrol duty when they were surprised by the “explosion of an artifact hidden in a backpack and placed by a roadblock”.

Another two National Guard soldiers were wounded by gunshots in El Hatillo and Petare as more violent episodes developed near to the capital, the minister indicated.

Meanwhile another three civilians have lost their lives in the political unrest, bringing the unofficial death count to 103 victims, according to data compiled by Venezuelanalysis.

In Aragua state, a candidate for the National Constituent Assembly (ANC), José Luis Rivas Aranguren, was shot eleven times in the face when he got up to speak at a campaign event. The assailant fired from the audience and later fled, while another two people were injured in the shooting.

Rivas was standing as a candidate for the transport sector in the ANC, announced by the government on May 1 in a bid to overcome the current political standoff.

The initiative, which will see five hundred and forty-five candidates elected on July 30 to rewrite the country's Constitution, has brought the country's already high political tensions to a boiling point.

While the opposition has called on its supporters to boycott the ANC and protest it in the streets, Chavista grassroots movements are using the assembly as a platform to push for revolutionary proposals within the government.

Prior to the murder of Rivas, Chavista student leader Juan Lopez was also shot dead at a student assembly in Anzoategui on May 4 under similar circumstances. He was likewise a supporter of the ANC.

Elsewhere in Valencia, authorities are also conducting investigations into the fatal shooting of a sixteen-year-old during a protest.

According to the Attorney General's office, Rubén Darío González Jiménez was fatally wounded Monday afternoon after being shot in the ribs while participating in a demonstration called by the opposition.

In a third fatality Monday, Miguel Angel Villalobos Urdaneta died in a car crash caused by anti-government barricades in Maracaibo at approximately 11 pm that evening. The 22-year-old reportedly attempted to dodge tree trunks and debris blocking the road when he lost control of his vehicle and flipped over. Tree trunks, burning rubbish, and other debris are commonly used by opposition militants in street barricades, which have resulted in the deaths of at least seven other people since April.

Monday’s violence comes after opposition militants attempted to lynch a man in the Caracas neighborhood of El Paraiso over the weekend, before being stopped by the National Guard.

In images and a video circulated on social media, a man can be seen stripped naked, beaten and tied to a lamppost with a noose around his neck. Residents in the opposition neighborhood Los Verdes had accused him of being a “thief”. The  community has been a site of frequent confrontation between armed protesters and security forces since the unrest began. 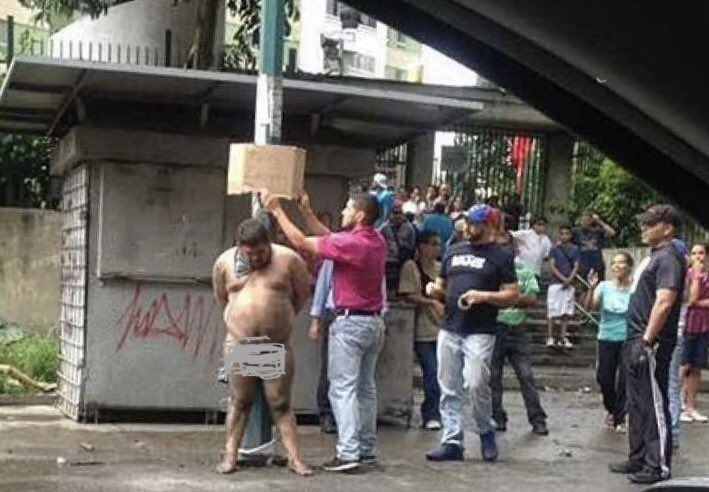 The attempted lynching was interrupted by National Guard soldiers. (AlbaCiudad)

The attempted lynching is one of many to have taken place over the last three months, including the murder of Afro-Venezuelan Orlando Figuera who was burnt alive by opposition militants in Altamira on May 20.

Venezuela’s national ombudsman, Tarek William Saab, has publicly condemned the act in Los Verdes as politically motivated violence, and made a plea to authorities to take action. 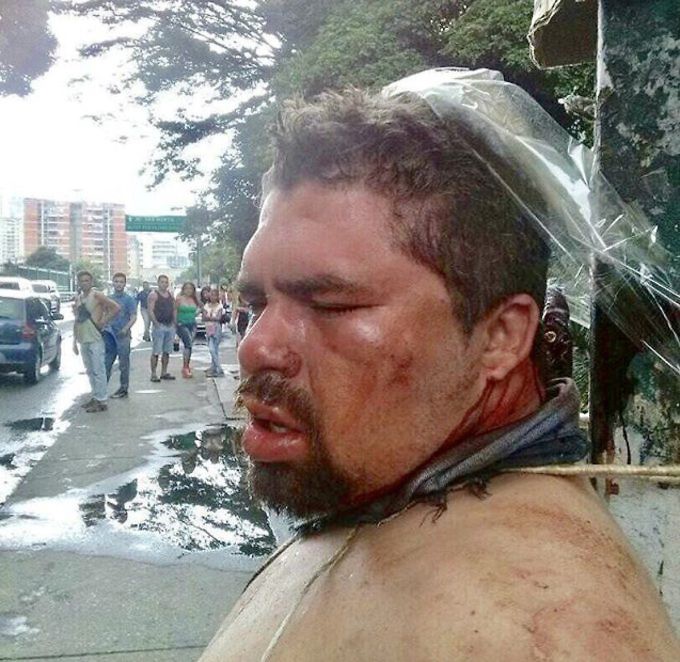 The man was heavily beaten by residents. (AlbaCiudad)

In a veiled reference to Attorney General Luisa Ortega, who has been accused of turning a blind eye towards right-wing political violence in recent months, Saab said that Venezuela’s judicial system was failing to stem the rising tide of attacks.

“Whoever puts the noose around the neck, and his accomplices, are potential murderers and should be treated as such by the law,” said Saab on Twitter.

“This type of neo-Nazism is advancing with great strides in Venezuela: it is growing on fertile ground in our country, while the justice system, in spite multiple pieces of evidence, does not stop the barbarism. Tomorrow will be too late,” he added.

The opposition has said that it will continue with its agenda of street protests until Venezuela is “free” of its leftist Chavista government.

Jul 7th 2017
An overwhelming majority of Venezuelans say they are unwilling to join violent opposition protests, according to a new survey.

Jul 7th 2017
Is the recent violence in Venezuela a sign of fascism to come?