According to the head of state, the attack was perpetrated by a member of the Venezuelan forensic police (CICPC) piloting a stolen police helicopter.

The assailants reportedly circled the Supreme Court, opening fire and dropping at least four hand grenades, one of which did not explode. The president indicated that the attack coincided with a “social function” in the Supreme Court, which he said could have resulted in “dozens of dead or injured”.

The helicopter also opened fire on the nearby offices of the Justice Ministry. No injures have been reported in either facility. Authorities have yet to capture the helicopter, identified as a Airbus Bolkow 105, which was allegedly stolen from the La Carlota Air Force base in eastern Caracas.

Photos of the incident show the helicopter with a banner that reads “350 Liberty”, in reference to the article of the Venezuelan constitution enshrining the right to resist any regime that infringes on democratic values or human rights. The Venezuelan opposition has repeatedly invoked Article 350 in the course of its twelve weeks of violent anti-government protests that have resulted in over 85 deaths to date.

The alleged perpetrator has been identified as CICPC officer Oscar Alberto Perez, who previously served as head of areal operations of the police body’s aerial division. Perez is also an actor who starred in the b-rate Venezuelan movie “Muerte Suspendida” in 2015.

At the same time as the attack, a series of videos were posted to Perez’s Instagram account showing the police official reading a statement alongside several masked men in military uniforms bearing machine guns.

“We are a coalition between military functionaries, police functionaries, and civilians in search of harmony and against this criminal and transitory government,” he declared before the camera. 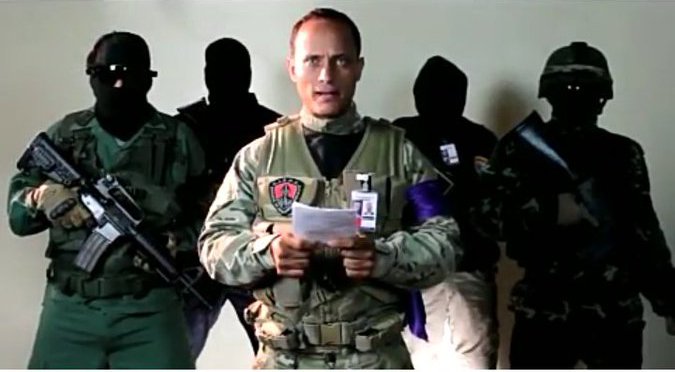 The videos were published at the same time as the helicopter attack. (screenshot)

In the statement, Perez also demanded the “immediate” resignation of President Maduro and the convening of “general elections”.

In his national address, Maduro urged the right-wing Venezuelan opposition coalition, the MUD, to “condemn this violent act”.

At the time of writing, the MUD has yet to issue a public response to the incident.

Aug 6th 2018
Venezuela’s right-wing parties are divided over whether to condemn the terrorist attack or deny it took place.

Jan 15th 2018
Venezuelan authorities confirmed that several members of the insurgent group and two police officers were killed during a shoot-out Monday morning.

Jun 30th 2017
Things in Venezuela are changing by the day, sometimes by the hour.

Jun 27th 2017
One soldier was reportedly killed in a looting while another three people were allegedly lynched by opposition supporters.

Jun 23rd 2017
One protester died and two soldiers were injured in an attack on a Venezuelan military base Thursday, according to Interior Minister Nestor Reverol.

Nov 25th 2022
Venezuelanalysis is almost 20 years old! To celebrate we want to share with you a neat infographic that explains our grassroots journalism and how you can...
END_OF_DOCUMENT_TOKEN_TO_BE_REPLACED