Caracas, June 13 2017 (venezuelanalysis.com) - Venezuelan Attorney General Luisa Ortega called Tuesday for eight Supreme Court judges to be stripped of their immunity and put on trial for “conspiracy against the order of the Republic”.

The shock announcement came less than 24 hours after Ortega also filed a motion to remove 33 Supreme Court (TSJ) justices from office Monday, citing “irregularities” in their selection. The top court had thrown out Ortega’s legal request to block an effort to rewrite the constitution just hours earlier.

Speaking to reporters outside the Supreme Court Tuesday morning, Ortega confirmed that she had officially requested authorization to pursue legal proceedings against the six judges and two substitute judges currently presiding over the TSJ’s constitutional tribunal. The attorney general accused them of having handed down a string of rulings that “conspired against” Venezuela’s system of governance and said they should face trial.

In particular, Ortega cited two controversial rulings issued March 29 in which the tribunal gave temporary permission to the TSJ to assume the legislative duties of the National Assembly, on the grounds that the latter was in contempt of court.

Although the two rulings were later partially overturned, Ortega said the decisions were of “such impact and magnitude” that they had “put democracy in danger”.

“It is not just through an act of force that you conspire against the republican system of a nation,” she said.

Ortega also accused the tribunal of violating the constitution by “reviving representative democracy” at the expense of “participatory democracy” through a sentence released on May 30, in which the court ruled that President Nicolas Maduro did not need to hold a consultative referendum in order to call a National Constituent Assembly (ANC).

“Conspiracy against the order of the Republic” is outlined in article 132 of the Venezuelan penal code and carries a prison sentence of eight to sixteen years.

Ortega’s Tuesday announcement is the latest in a string of public statements against the government since the beginning of April, when she broke with the leftist administration of Nicolas Maduro over the controversial TSJ ruling. Her public rupture coincided with the explosion of violent opposition street protests, leading to ongoing unrest which has claimed at least 76 lives to date.

On Monday, Ortega also visited the TSJ to file a motion to remove 33 Supreme Court Justices from office. The top prosecutor claimed the process by which 13 judges and 20 substitutes were appointed by the outgoing Chavista National Assembly in December 2015 was “irregular” and that they should be dismissed.

In particular, she said the official parliamentary document informing of the judges’ appointment had not been signed by herself or the secretary of the Moral Republican Council. The latter council acts on behalf of the citizens’ branch of government, including the Ombudsman’s office, the Attorney General’s office and the Comptroller General’s office.

The Supreme Court has been repeatedly called on to intervene in disputes between the executive and the legislature since the latter came under opposition control in December 2015. The top court has mostly ruled in favor of the national government, labelling as unconstitutional many of the opposition’s initiatives, such as its attempt to remove the president while he was away on a state visit in January.

However, in an interview with Union Radio Monday, Ortega said it was the judges’ nomination that had exacerbated the political stand-off between the opposition-held National Assembly and the leftist Maduro government.

“It is without a doubt a factor which has contributed to the [fact] that the TSJ does not give effective solutions to the country’s crisis. On the contrary, it accelerates it”.

During the interview, the attorney general also claimed that she “had not participated” in the selection process at the time – in spite of the fact that it is the Moral Republican Council which carries out a pre-selection of possible Supreme Court Justices for the National Assembly.

“I warned at the time that this process was poorly done,” she said.

But Ortega’s claim was almost immediately refuted by Ombudsman and Moral Republican Council President Tarek William Saab, who stated: “There was no opinion, either in writing or verbally, expressed by the attorney general against this selection process. Nor a dissenting vote, nor an injunction and that is archived and public knowledge”.

“If there had been, the proof would have remained in the archives of the Moral Republican Council as a record of that meeting,” he added.

Likewise, a photo has emerged of the top prosecutor that has cast doubts on her version of events. In the photo published to her official Twitter account, Ortega can be seen handing over a list of potential Supreme Court candidates to a legislative official. 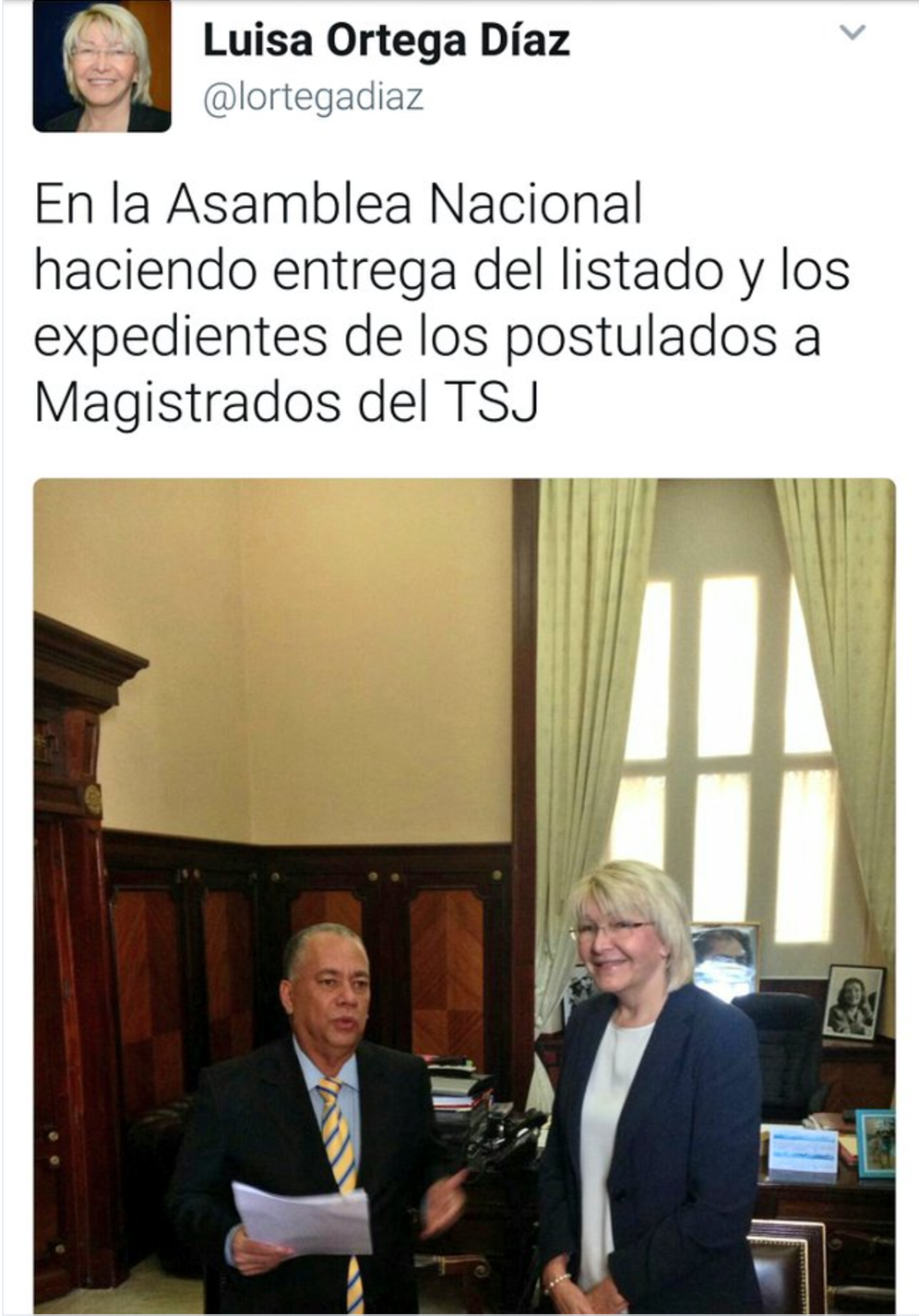 "In the National Assembly handing over the list and records of the candidates for TSJ judges," the statement reads. (Twitter/lortegadiaz).

The attorney general has suggested that she did not go public with the accusation before now because it reportedly took the Public Prosecution 18 months to obtain proof of the alleged irregularities in the selection process.

The move by the country’s chief prosecutor was announced on the same day that the hard-right vice-president of the National Assembly, Freddy Guevara, confirmed opposition legislators would seek to remove the 33 judges in a parliamentary session this Tuesday.

Ortega’s attempts to have the Supreme Court Justices dismissed more than 18 months on from their initial selection came shortly after the Supreme Court threw out her request to block the National Electoral Council (CNE) from proceeding with elections for the ANC.

In its ruling on Monday the TSJ decided that the attorney general’s request was “inadmissible” due to an “inept accumulation of claims”. Earlier this month, the attorney general also filed a legal brief challenging the high court's May 30 ruling on constitutional grounds, but the claim was similarly thrown out.

The convening of constituent assembly to re-write the constitution was announced by President Nicolas Maduro on May 1 as a way to promote dialogue between his government, the right-wing opposition and civil society, amidst deadly opposition street protests.

Despite the fact that hundreds of grassroots groups have already made official pre-candidate nominations to the CNE for the assembly, the opposition and Ortega have repeatedly railed against the move as undemocratic. They argue that there should be a consultative referendum to decide whether the Venezuelan people want to re-write the constitution and not just a referendum to approve the new Magna Carta once it is drafted – as proposed by the government.

Although the constitution does not explicitly state that a consultative referendum must be held if an ANC is called by the executive, critics such as Ortega have argued that such an initiative is “implied” due to the constitution’s commitment to participatory democracy.

Since her surprise break with the Maduro administration, the top prosecutor has been accused of acting as a spokesperson for the opposition and attempting to provoke a legitimacy crisis within the Venezuelan state.

For her part, Ortega claimed Monday that she and her family had been harassed by the National Bolivarian Intelligence Service (SEBIN]) since she distanced herself from the government. The attorney general said President Nicolas Maduro would be to blame if her safety were put in jeopardy.

Jun 20th 2017
The Supreme Court has officially accepted a legal request filed by Venezuelan legislator Pedro Carreño, asking the body to assess the possibility of bringing...

Jun 15th 2017
Venezuela’s highest court dismissed Wednesday a call from the attorney general for the removal of its judges.

Jun 2nd 2017
Venezuela’s attorney general took on the country’s highest court Thursday, challenging a ruling that could pave the way for a rewriting of the constitution.

Jan 14th 2022
A Venezuelan economist discusses the impact of the economic war on the Venezuelan people and the policies that should be implemented in the face of it.
END_OF_DOCUMENT_TOKEN_TO_BE_REPLACED