The Supreme Court’s Executive Magistracy (DEM) in Chacao was also attacked for the fourth time in 70 days on Monday, leading to the evacuation of the office's 2500 workers. (Federico Parra/Getty Images)

973 people, including 45 children, were evacuated from the Venezuelan Housing Ministry when it came under attack by opposition militants. (Ministerio de Vivienda)

Opposition leaders rallied their supporters to once again take to the streets in nationwide marches on Supreme Court offices, which ended in renewed violence.

The focus of the unrest was the wealthy eastern Caracas municipality of Chacao, where over 150 masked militants besieged Venezuela’s Housing Ministry with Molotov cocktails and blunt objects.

Opposition supporters destroyed the front gate and reportedly caused damage to the public attention offices in the first two levels of the building, leading the ministry’s employees to flee to higher floors. Ultimately 973 workers were evacuated from the building by firefighters, including 45 children from the ministry's nursery. Twenty-five children received medical attention, Justice Minister Nestor Reverol has indicated. 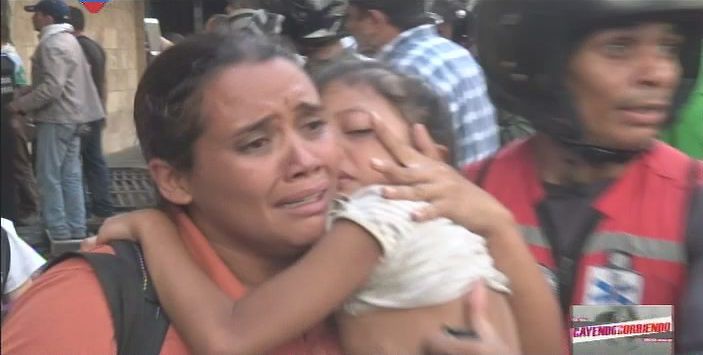 Among the 973 people evacuated from the Housing Ministry were 45 children. (Ministerio de Vivienda)

According to Minister Manuel Quevedo, the attack is the 15th instance of opposition violence against Housing Ministry facilities nationwide, which have been frequently targeted for their role in building 1.6 million affordable homes for Venezuela’s poor.

The Supreme Court’s Executive Magistracy (DEM) in Chacao was also attacked for the fourth time in 70 days on Monday, leading to the evacuation of the office's 2500 workers.

Hundreds of opposition supporters surrounded the building, which they proceeded to set on fire with Molotovs and homemade explosive devices in an act photographed by international journalists. Protesters broke into the high court office and carried out pieces of furniture that they subsequently burnt in the streets.

The demonstrators also looted a nearby bank, leaving the entire first floor in shambles and carrying off even the photocopy machines.

Venezuelan Supreme Court President Maikel Moreno responded to the incident with the announcement that the DEM would be moved to another location on the grounds that the opposition-held municipality of Chacao is a “lawless territory”.

Chacao Mayor Ramon Muchacho repudiated the violence against the DEM while insinuating that the attack may have been carried out by "government infiltrators", in spite of the widely circulated video footage which suggests otherwise. Muchacho did not offer evidence to bolster his assertion, nor acknowledge the attack on the Housing Ministry whose evacuation he attributed to "smoke coming from the DEM and tear gas".

Authorities have arrested 24 suspects in connection to the violent incidents, which are under investigation by the Public Prosecutor's office.

Meanwhile in Vargas state, the day’s unrest claimed the life of Socrates Salgado (49), who died under uncertain circumstances in the costal city of La Guaira. Opposition legislators have blamed the death on tear gas allegedly fired by the National Guard, but the account is unconfirmed. A state prosecutor has been dispatched to investigate the incident.

The death brings the total number of those killed in 10 weeks of opposition protests to 76, including at least 11 people dead at the hands of authorities and 21 deaths attributable to opposition political violence.

Elsewhere in Vargas, anti-government militants burnt the headquarters of the Guaicamacuto Socialist Commune in addition to ransacking and looting the Macuto popular cafeteria.

“To the military personnel in the streets, I want to send a very clear, sober message framed by our constitution: you also have a right and duty to rebel,” he implored.

Lopez was sentenced to nearly fourteen years imprisonment in 2015 for his role in leading the previous year’s violent opposition protests demanding the ouster of the elected government, which resulted in 43 dead and nearly a thousand injured.

Lopez’s statement is the latest in a series of opposition calls to mutiny in the FANB. This past April, National Assembly President Julio Borges issued a more subtle appeal to the military’s rank-and-file to disobey orders from their superiors.

Lopez, Borges, and a host of other leading opposition figures were active participants in the US-backed 2002 coup that temporarily ousted then President Hugo Chavez for 47 hours.

Oct 30th 2017
The European Parliament’s left caucus has rejected the transnational legislature’s decision to award the prestigious Sakharov Prize for Freedom of...

Jun 15th 2017
Venezuela’s highest court dismissed Wednesday a call from the attorney general for the removal of its judges.

Jun 5th 2017
A Venezuelan man burned alive by opposition protesters has died of his injuries as anti-government unrest claimed two more lives over the weekend.

Nov 25th 2022
Venezuelanalysis is almost 20 years old! To celebrate we want to share with you a neat infographic that explains our grassroots journalism and how you can...
END_OF_DOCUMENT_TOKEN_TO_BE_REPLACED