Puebla, Mexico, May 12, 2017 (venezuelanalysis.com) – Around 100 people were allegedly trapped in Venezuela’s embassy in Madrid Thursday by far right protesters.

The protesters have been accused of chanting “Franco, Franco!” while protesting outside an embassy event on violence in Venezuela. A close supporter of Adolf Hitler, Francisco Franco ruled Spain as a military dictator for over three decades until his death in 1975. The protesters also carried signs demanding freedom for Venezuela’s jailed right-wing opposition leader, Leopoldo Lopez.

However, the protesters themselves have denied the allegations, claiming they were shouting "narco". The protest was in response to an event hosted by the embassy to discuss right-wing violence in Venezuela. The event included representatives from the NGO Victims of Guarimba, a group that provides support to Venezuelans injured by guarimbas. “Guarimba” is a term used in Venezuela to refer to violent right-wing protests and roadblocks. More than 40 people died in 2014, when the guarimbas took over the streets of Venezuela as part of a campaign to force President Nicolas Maduro from office. The guarimbas struck again last month, when they began another campaign of political violence, which has so far left 44 people dead.

According to forum attendee and coordinator of the left-wing party Izquierda Unida, Daniel Moreno, the protesters were aggressive and threatening.

"We were threatened with death,” he alleged.

Venezuelan ambassador Mario Isea also condemned the incident, accusing protesters of barring attendees from leaving the building for around five hours. He also accused Spanish authorities of failing to guarantee the safety of forum-goers.

“For actions much less forceful than these, the [Spanish] authorities would have acted with force if the demonstrators were against those who oppose Venezuela,” he said.

Protest organisers have denied allegations they acted improperly, and argued they were merely demonstrating in support of democracy.

Amid the protests in Spain, the tension in Venezuela continued Thursday, with right-wing groups accused of attacking a fuel truck owned by state oil firm PDVSA.

“We denounce another terrorist act in Coloncito, Tachira state, against PDVSA … [which put] the lives of the population at risk," PDVSA head Eulogio Del Pino stated.

Photos circulated on social media appeared to show the truck being seized by opposition groups, before being set ablaze. 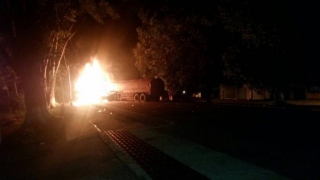 Meanwhile in Caracas, unconfirmed reports have surfaced claiming a prominent Chilean leftist has been assassinated. According to a report from Chilean news website Primera Linea, leftist and former guerrilla Jose Alejandro Munoz Alcoholado was gunned down in a restaurant in Caracas. The claim cannot be independently verified by Venezuelanalysis.

Update: A previous version of this article stated protesters were shouting "Franco". Protesters have since disputed this, claiming they were actually shouting "narco".

Nov 24th 2005
Spanish firms continue to make plans for $1.6 billion sale of aircraft and boats to Venezuela, even as Washington raises objections. In public statements,...

Jan 24th 2023
Chris Gilbert and Cira Pascual Marquina look at the Venezuelan communes as a key force in an extended process of national liberation and social...
END_OF_DOCUMENT_TOKEN_TO_BE_REPLACED