Caracas, May 3, 2017 (venezuelanalysis.com) – Four people were killed and over a dozen wounded Tuesday as a result of the Venezuelan opposition’s “National Barricade” that saw anti-government demonstrators block roads throughout the country.

Organized by the right-wing opposition coalition, the Democratic Unity Roundtable (MUD), the national day of action was a response to Venezuelan President Nicolas Maduro’s announcement Monday convening a constituent assembly to redraft the country’s constitution.

The move has been denounced as a “fraud” and a “coup” by MUD spokespeople despite the proposal being previously endorsed by top opposition leaders, including Freddy Guevara, Leopoldo Lopez, and Maria Corina Machado.

In spite of the MUD’s calls for “civil disobedience”, Tuesday’s mobilizations once again gave way to deadly violence.

One of the victims has been identified as Ana Rodriguez (42), though the other person killed remains unidentified. 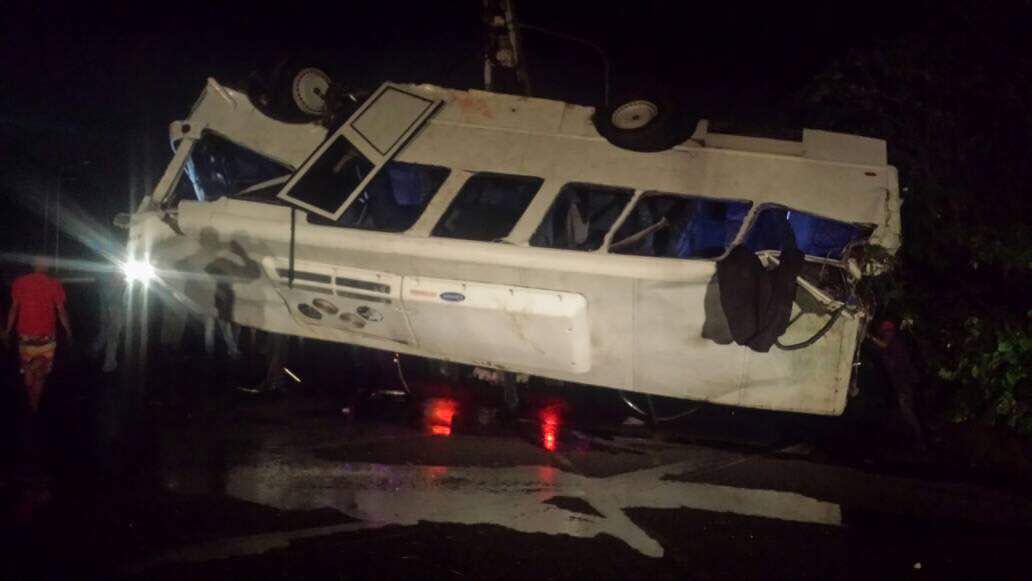 The accident occurred when the bus swerved to avoid an anti-government barricade. (@AndrewsAbreu and @CristopherB)

Another person was killed in a traffic accident in Caracas Tuesday afternoon, which authorities likewise attribute to opposition barricades. Olympic swimmer Angel Enrique Moreira Gonzalez (28) was killed when another vehicle collided with his motorcycle on the Prados del Este highway and subsequently fled the scene. Venezuelan Interior Minister Nestor Reverol has indicated that the other vehicle was going the wrong direction on the highway due to a barricade near the Santa Fe exit, leading to the fatal accident.

A fourth person was killed Tuesday evening during an attempted looting of a supermarket in Valencia. Eduardo Jonathan Quintero (21) was allegedly shot and killed by the shop owner who opened fire on Quintero and other looters. Authorities are actively looking for the owner, who has been identified as Xen Ye Chon (41).

The incident brings the death toll after nearly a month of protests to 36, including 13 people who have died directly or indirectly as a result of the actions of protesters and 5 killed by authorities.

An adolescent, two more National Guard personnel, and a local police officer were also injured in the altercation. A district attorney has been dispatched to investigate.

In Lara state, masked opposition demonstrators hijacked two trucks, including a gasoline tanker belonging to the state oil company PDVSA, which they refused to turn over until the government released 141 people arrested in protests in recent days. 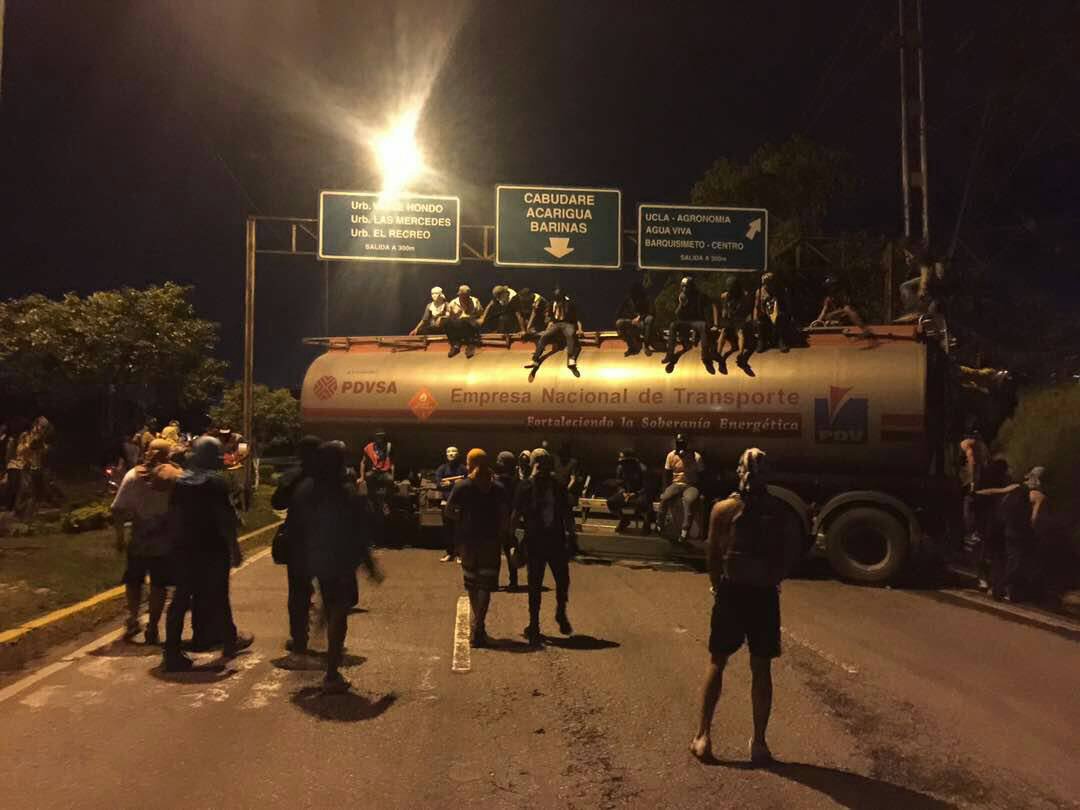 Despite efforts at negotiation by authorities, the anti-government militants refused to release the trucks, setting fire to the PDVSA tanker on Tuesday evening.

According to PDVSA Eulogio Del Pino, the empty tanker could have detonated in a deadly bomb blast if the driver had not taken the security measure to release the gas chamber.

While opposition supporters have accused “Chavista colectivos” of torching the tanker, a spokesperson for the opposition governor of Lara, Henry Falcon, has confirmed that “in no moment did colectivos pass along the Intercommunal Avenue where the protesters were”.

In Carabobo state, masked opposition militants firebombed the local ombudsman’s office in the city of Valencia, denounced National Ombudsman Tarek William Saab. A state district attorney has been commissioned to investigate the incident. 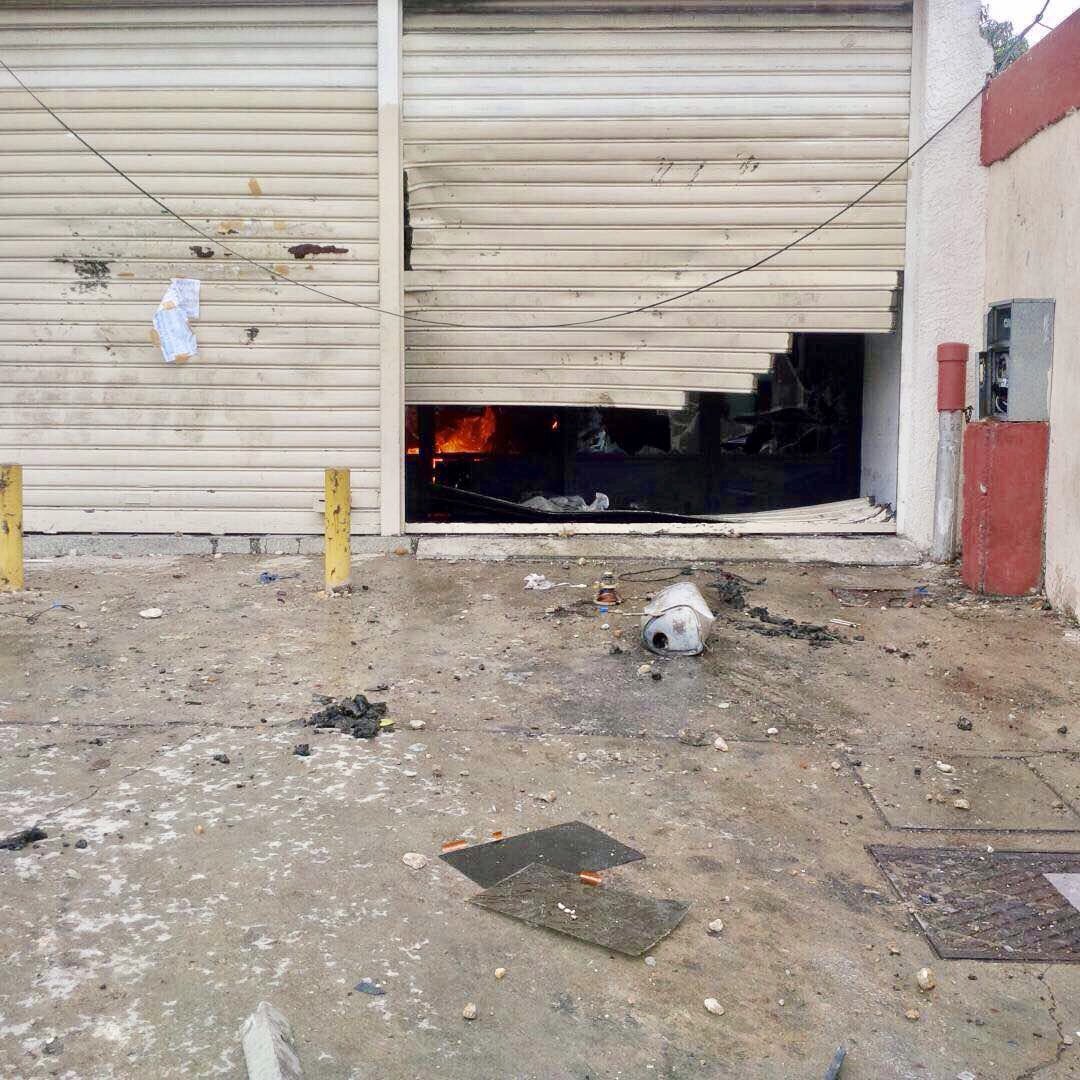 The ombudsman's office in Valencia was firebombed on Tuesday. (@TarekWilliamSaab)

Saab also revealed that eight other offices of the national human rights watchdog had also been attacked nationwide.

In southeastern Caracas, a call center belonging to state telephone company CANTV was besieged by protesters wielding Molotov bombs from approximately 5:30 to 8:00 pm. 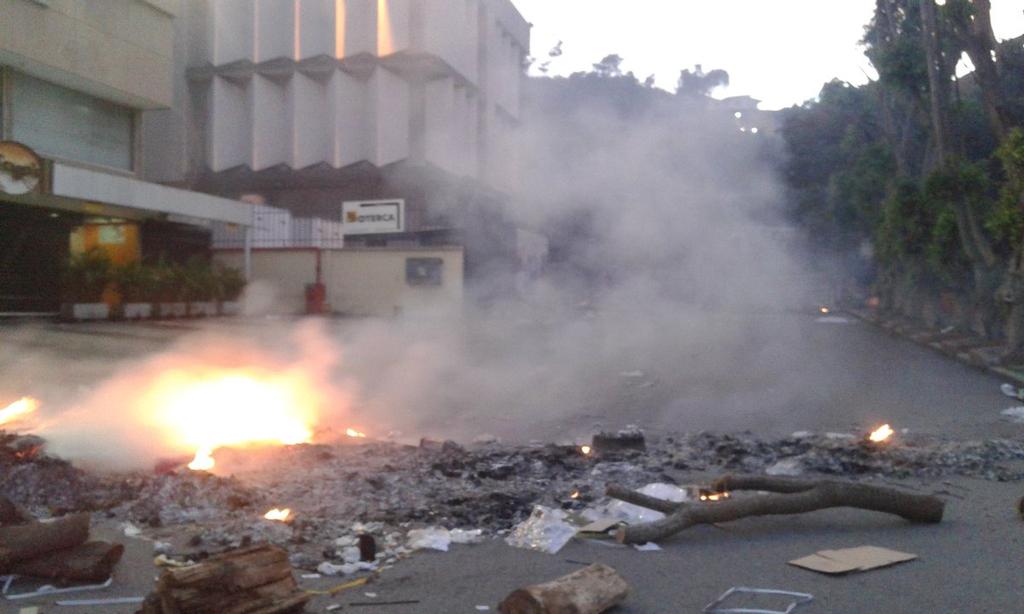 A burning barricade near the CANTV telephone exchange in La Trinidad. (@dbaru)

According to CANTV President Manuel Fernandez, state telecommunications personnel successfully prevented any serious damages to the facility, which serves nearly 18,000 telephone users and over 17,000 broadband Internet subscribers in the surrounding La Trinidad neighborhood.

On Monday, the company’s installations in Bolivar and Falcon reportedly came under attack, while a blackout on Margarita Island on Tuesday has been attributed to the sabotage of a maritime cable. Other attacks on the electrical grid were also reported in Tachira and Merida, the state firm has indicated.

The Venezuelan government has estimated that the ongoing opposition protests have caused over US $140 million in damages to government institutions, as well as public and private property.

May 8th 2017
Rexol Acevedo, 32, was allegedly shot by opposition protesters.

May 2nd 2017
Hundreds of thousands marched in defense of the government as opposition protests saw renewed focos of violence.

May 2nd 2017
Preliminary autopsy results indicate Pernalete was killed by a captive bolt pistol fired at point-blank range, and not by a tear gas grenade as opposition...

May 1st 2017
Former Uruguayan President Jose “Pepe” Mujica accused the opposition of acting in a radical and irrational way, while the Pope suggested that opposition...

Jan 29th 2023
Besieged by imperialism, a remote commune projects a better future based on solidarity and the commons.
END_OF_DOCUMENT_TOKEN_TO_BE_REPLACED