Caracas, May 2, 2017 (venezuelanalysis.com) – Thousands of Venezuelans took to the streets of Caracas in pro and anti-government marches Monday in commemoration of International Workers’ Day.

Hundreds of thousands of red-clad supporters of President Nicolas Maduro marched from three points to the heart of Caracas in defense of the gains for working people under the Bolivarian Revolution.

“One of the most important [gains] was the Work Law, which we must defend, because it gave the entire working class freedom, the right to work, and education as well as promoting the inclusion of women,” Robinson Gonzalez of Lara state told VTV.

Approved in 2012 the Organic Law of Work and Workers (LOTTT) is widely considered one of the most progressive labor laws in the world, institutionalizing a host of protections, including the world’s third longest maternity leave, disability rights, as well as guarantees against outsourcing and arbitrary firings. 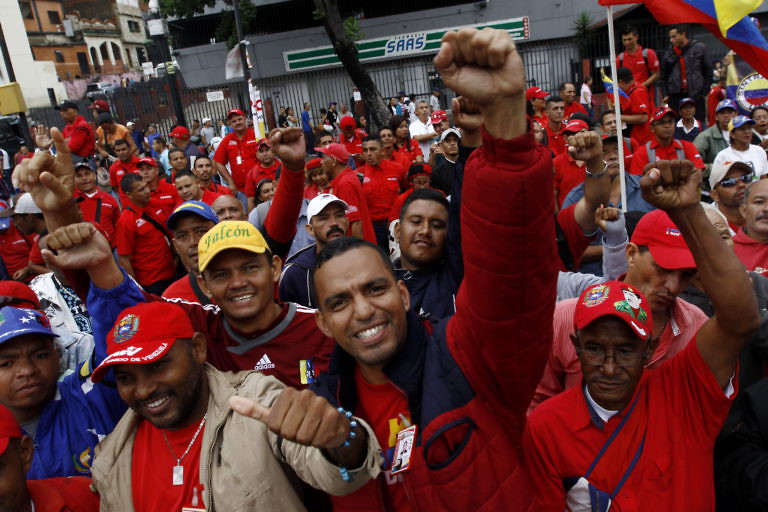 On Monday, anti-government demonstrators once again took to the streets to call for early presidential elections one year ahead of schedule as well as the removal of Venezuela’s Supreme Court justices.

Opposition leaders rallied their supports to march on the offices of the Supreme Court and National Electoral Council in the western Caracas municipality of El Libertador despite the lack of a permit for the route, which conflicted with that of the simultaneous Chavista marches.

As in previous mobilizations in recent weeks, Monday’s demonstration concluded in violent clashes with authorities as protesters attempted to march along Libertador Avenue where a pro-government march was slated to begin. Clashes also broke out along the Francisco Fajardo and Cota Mil highways with demonstrators setting fire to police crowd control vehicles. 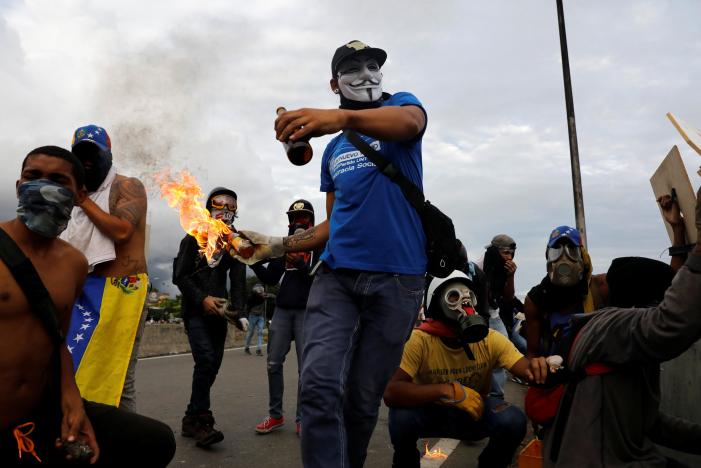 According to Chacao Mayor Ramon Muchacho, 45 people suffered minor injuries in the course of the day’s mobilization, with one person being hospitalized for a head lesion.

The opposition mayor also reported that a group of 20 Chavistas from the country’s interior were nearly lynched by anti-government protesters when their transport was diverted to the east of the city.

The march saw renewed focos of violence, which have come to characterize the opposition’s mobilizations over the past month.

In La Florida, near the Cota Mil highway, protesters allegedly burned down a kiosk and outdoor bookstore. Likewise along the Cota Mil, opposition supporters are reported to have set fire to a truck as well as have strung barbed wire along the road in an effort to injure motorcyclists.

Venezuela’s National Journalists’ Union, for its part, denounced attacks by protesters against correspondents for the private television channel Globovision, leaving their vehicle damaged. The incident is the latest in a series of aggressions and harassment by opposition supporters against journalists from both state and private media in recent weeks.

Opposition leaders have vowed to remain in the streets until the government grants all of their demands, rallying their supporters to block roads in another show of force this Tuesday.

Thirty-two people have died since the anti-government demonstrations began on April 4, including 5 people killed by state security forces, 10 people killed by protesters, and the rest unaccounted for.

The government has moreover estimated that protests have caused over US $140 million in damages to public institutions, infrastructure, and private property.

May 2nd 2018
Announcing a 95% minimum wage increase, President Nicolas Maduro pledged to resolve the country's economic crisis if re-elected to a second term in...

May 2nd 2017
The National Constituent Assembly will re-draft the country’s Constitution from the bottom up, says the Venezuelan president.

May 2nd 2017
Preliminary autopsy results indicate Pernalete was killed by a captive bolt pistol fired at point-blank range, and not by a tear gas grenade as opposition...

May 1st 2017
Venezuelan President Nicolas Maduro announced an increase to the minimum wage Sunday, which he said would help to shield workers' from the effects of the...

Apr 12th 2021
According to Maduro, the funds to purchase 11.3 million doses were liberated by US authorities.

Apr 9th 2021
Researchers from the Political Ecology Observatory talk about the environmental devastation caused by the mining and oil industries in today’s Venezuela.

Apr 7th 2021
The measures include a ban on evictions, a special “stay at home” benefit for two million private-sector workers, and a one-time benefit for 15...

Apr 5th 2021
Caracas has also created a special military zone and brigade to deal with the situation in Apure state, where 17 people have died.
END_OF_DOCUMENT_TOKEN_TO_BE_REPLACED