Caracas, May 2, 2017 (venezuelanalysis.com) – An autopsy conducted by Venezuelan forensic scientists Friday ruled out tear gas in the death of Juan Pernalete, suggesting that the opposition protester may not have been killed by authorities.

At approximately 2:50 in the afternoon on April 26, the 20-year-old Metropolitan University student was rushed to a local Chacao hospital without vital signs and with a hematoma on his left chest.

Following the incident, Venezuelan opposition leaders and private media outlets immediately attributed the death to the alleged impact of a tear gas grenade used by National Guard personnel in dispersing protests in the area.

“What will the dictatorship say? That the young Pernalete, murdered in Altamira by tear gas grenade, was also our fault,” tweeted Popular Will party leader and National Assembly Vice-President Freddy Guevara that afternoon.

However, according to the preliminary results of an autopsy conducted by the head of the Public Prosecution’s Criminalistics Unit against the Violation of Fundamental Rights, Doctor Elizabeth Pelay, the bruise on Pernalete’s left nipple does not match that inflicted by a tear gas canister.

“A sharp blow that did not leave a large wound because the weapon used doesn’t have a bullet, the bolt entered and left,” the leading forensic scientist noted, observing that the bruise is similar to that resulting from a “captive bolt pistol” fired at point blank range. 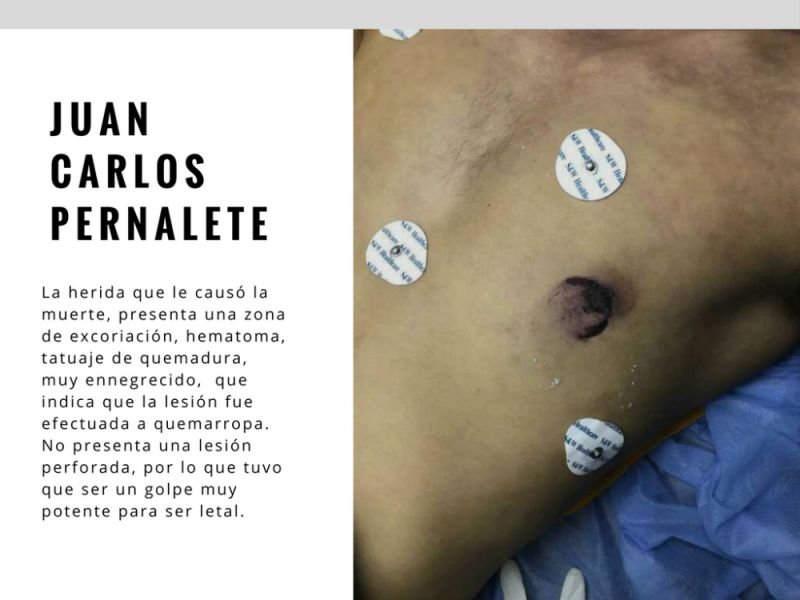 An image of the wound suggests that the blow was so severe that it reportedly fractured Pernalete’s rib without puncturing his skin, leaving only a blackened mark. (Misión Verdad)

Captive bolt pistols are widely used in the stunning of livestock prior to slaughter and function by propelling a high velocity metal rod at close range in order to provoke a concussion. 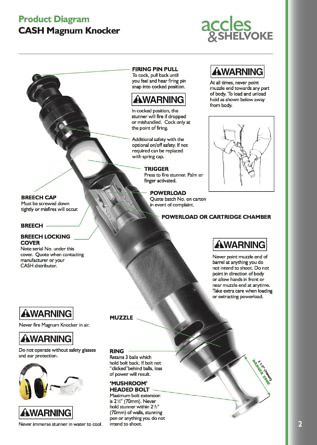 Camera footage of the final minutes of Pernalete’s life offers further evidence that the death was not caused by tear gas and may have resulted form a close range weapon.

In a video captured by pro-opposition journalist Marcos G. Morin, Pernalete is shown being accompanied by two masked protesters who subsequently leave him on the ground and exit the scene.

In slowed down version of the same footage, the two demonstrators supporting the student appear to handoff an unidentifiable object. At this moment, Pernalete’s upright posture changes as he begins to collapse forward and is carried by an orange-shirted protester with gloves, who subsequently leaves him on the ground and walks away.

The only dialogue heard on camera is the question, “Did they shoot him?” to which one replies, “No, no,” and another says, “Take him over there.”

No National Guard personnel are visible in the video and it appears that the small amount of white smoke in the background is the result of burning anti-government barricades nearby, as revealed in another video shot by Morin close to the scene at 3:00 pm that afternoon.

Despite the new forensic evidence, Venezuelan opposition leaders have continued to blame Pernalete’s death as well as the 31 others killed over the past month on state security forces.

“These deaths are the product of repression… It’s malicious and shameful that they [the government] want to flee the fact that they are the face of violence,” declared National Assembly President Julio Borges in a press conference on Sunday.

Venezuelan authorities continue to investigate the case under the direction of the 81st Caracas Metropolitan Area District Attorney William Rojas.

A video of the last few minutes of Pernalete's life recorded by pro-opposition journalist Marcos G. Morin suggests that security forces were not responsible for his death.

May 5th 2021
Attorney General Saab stressed Venezuela’s willingness to work with the ICC but expressed frustration with the court’s “lack of transparency...

Apr 27th 2017
One Venezuelan died during an anti-government demonstration this Wednesday, after opposition leaders called on their supporters to march on the national...

Apr 21st 2017
Venezuelan authorities have ordered the arrest of a group of soldiers accused of involvement in the fatal shooting of an opposition protester.

Jan 24th 2022
The opposition politician rejected the accusations, called for street protests, and blasted efforts to “kill off” the recall referendum.