Puebla, Mexico, April 21, 2017 (venezuelanalysis.com) – Venezuelan authorities have accused anti-government groups of launching a series of attacks overnight Thursday on public services and infrastructure, while at least 10 people have been confirmed dead in a riot.

The deaths occurred amid rioting and the looting of businesses in the San Andres neighbourhood of Caracas. At least 20 stores were looted. Local media has reported at least eight of the deaths were by electrocution in a looted bakery, though the exact cause remains unclear. Private media outlets have reported the deaths may have been caused by electrical cables damaged during the riot, though there’s also speculation some of the rioters were killed while trying to climb an electrified fence.

Two business owners were also reported dead. Spain’s ABC has identified those killed as Ramon Martinez and Kelvin Leon. Both men were reportedly shot after trying to defend their stores from looters.

The Venezuelan government is yet to confirm the reports, though security forces have cordoned off the area.

In a separate incident, officials accused opposition protesters of endangering the lives of more than 50 newborn babies at the Hugo Rafael Chavez Frias Infant Maternity Hospital in Caracas.

President Nicolas Maduro ordered the evacuation of the hospital around 10pm Thursday night, after reports the building was under siege by opposition protesters. The attack itself began around 9pm, and continued for three hours, according to the hospital’s director, Dr. Rosalinda Prieto.

“We were attacked by violent groups, who showered us with stones and blunt objects,” she told state media.

She continued, “They then burned a lot of garbage in front of the hospital, and the smoke penetrated inside the facilities where there were newborn children in the emergency area.” 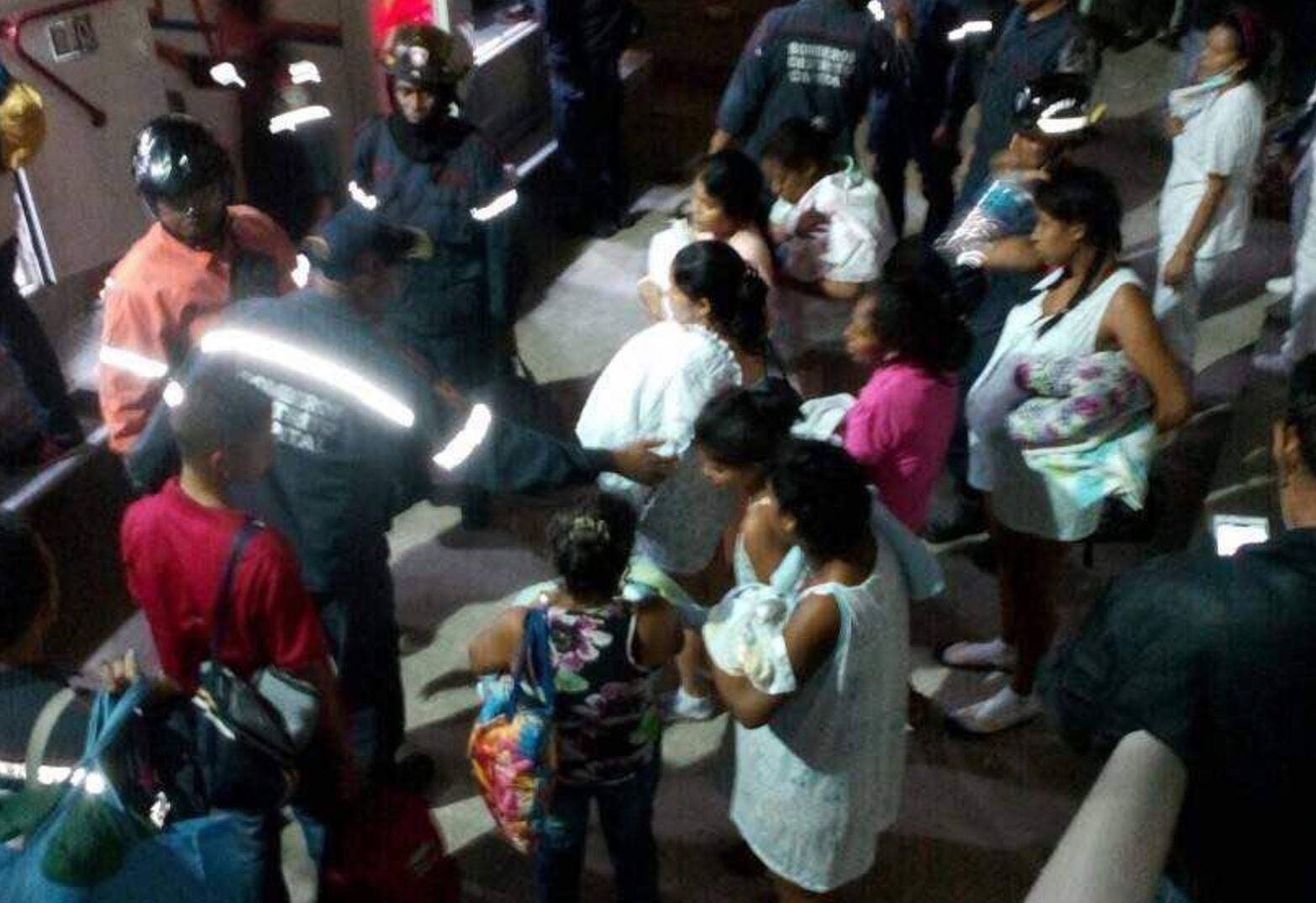 Mothers and babies being evacuated from the hospital last night (CiudadCCS)

“I’m reporting to the international community that armed groups hired by the opposition attacked a maternal and children’s hospital, with 54 children [inside],” she stated.

The incident has also garnered international attention, with UNICEF issuing a statement calling for the protection of "children, adolescents and other vulnerable groups" in Venezuela in response.

Elsewhere in Caracas, the city’s subway system was also attacked by vandals in the early evening.

“At 5:15 in the afternoon, we were affected by the vandalism of a train leaving the Mamera Caricuao station,” said Gerardo Quintero, the president of Caracas Metro.

“[The train] was attacked with blunt objects, which inflicted damage on two windows of the side doors of a train," he said.

Quintero said no injuries were reported in connection with the attack, though he urged for calm and an end to the violence.

“We want to make a call for peace, we want to continue building our country and to continue working; these acts do not lead to anything, [they just] delay us, and cause damage to [public] facilities,” he said.

More attacks also targeted the electricity grid overnight. Energy Minister Luis Motta Dominguez said the La Delicias B3 station in Caracas was sabotaged by protesters. The demonstrators then blocked streets around the station, obstructing technicians who tried to respond to the damage. Dominguez said the sabotage affected five neighbourhoods. He added that two similar acts of attempted sabotage were reported in the states of Aragua and Trujillo, though no other major power outages were confirmed. More acts of vandalism were also reported elsewhere in Caracas, including around the Francisco Fajardo highway.

The total cost nationwide of the spate of opposition violence is yet to be calculated by officials, though the state government of Portuguesa has estimated anti-government violence has cost their taxpayers as much as BsF260 million (around US$55,300).

During a press conference on Thursday, Portuguesa Governor Reinaldo Castaneda said in the past week vandals have attacked the offices of a state owned hydroelectric company, the state treasury building and the government owned supermarket, Abastos Bicentenario. According to Castaneda, most of the violence took place after an opposition protest deviated from its route in the state capital of Guanare. The demonstration took a turn for the worse when it was unexpectedly led towards a pro-government rally, prompting clashes between rival protesters and security forces.

“They did not comply with their [predetermined] route, and with molotov cocktails, tear gas and stones they advanced more than nine blocks towards the government [building] to burn it, loot it and lash out against our people,” he said.

The governor went on to describe the incident as the “face of fascism”.

“We will not allow such violence to return to our state,” he said.

Apr 21st 2017
Venezuelan authorities have ordered the arrest of a group of soldiers accused of involvement in the fatal shooting of an opposition protester.

Apr 20th 2017
Opposition leader Julio Borges said the Hague had already accepted a case of torture for investigation, but the international court denied the claim.