Caracas, April 19, 2017 (venezuelanalysis.com) – Hundreds of thousands of Venezuelans took to the streets of the capital Wednesday in massive pro and anti-government rallies marking the country’s independence day.

Thousands of red-clad supporters of President Nicolas Maduro mobilized in four separate marches that culminated in a mass rally along Bolivar Avenue in downtown Caracas.

“I am here to support the Revolution… because I love my country, I’m a Chavista in the flesh and I support Chavez and Maduro, and I want that to be heard in the US, Europe and the rest of the world so they can’t say this is a show, that we don’t have numbers, that we’re paid to be here. No, this is real,” one marcher told Venezuelanalysis. 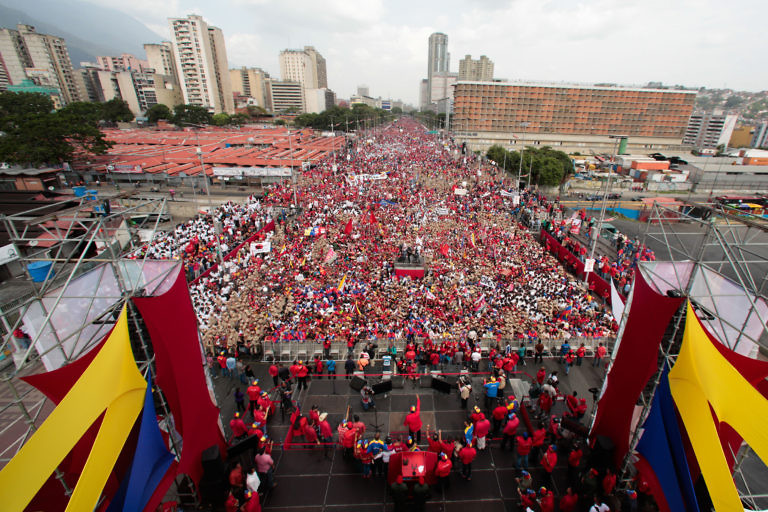 Venezuelan President Nicolas Maduro addresses hundreds of thousands of supporters on Bolivar Avenue in the heart of Caracas. (AVN)

The pro-government demonstration comes on the heels of a series of statements released by the US State Department and 11 neighboring countries warning the Maduro administration to “ensure the right to peaceful protest”. Caracas has blasted the communiqués as “interventionist”, calling into question the moral and legal authority of Washington and its regional allies to intercede in internal Venezuelan affairs.

Many present at Wednesday’s march likewise expressed their categorical rejection of foreign interference.

“Here we are at the largest anti-imperialist march in Venezuelan history, the US empire has done much harm and we have right-wing opposition sectors that seek the ouster of the legitimately elected government, [but] here we are in the streets, ready to give everything including our lives to prevent US boots from touching our soil,” affirmed Jesus Pinto, national secretary general for the Tupamaros National Revolutionary Movement.

The strong anti-interventionist sentiment has been reflected in a recent poll by independent pollster Hinterlaces, which found that 76 percent of Venezuelans oppose international intervention to remove President Maduro.

Meanwhile, thousands of opposition protesters marched from the Plaza Francia in the wealthy eastern Caracas municipality of Chacao towards the National Ombudsman’s office downtown, despite lacking the necessary permit from El Libertador Mayor Jorge Rodriguez.

The government has consistently denied permission for opposition supporters to march to Caracas' western municipality of El Libertador since a short-lived opposition-led coup in 2002, triggered by an anti-government march diverted towards Miraflores Presidential Palace that left 19 dead by opposition sniper-fire.

The march was called by the right-wing opposition Democratic Unity Roundtable (MUD) coalition, which has presented the government with a hodgepodge of demands, ranging from holding postponed regional elections and allowing humanitarian aid to removing Supreme Court justices and convening snap presidential elections one year ahead of schedule.

Clashes with authorities later ensued as demonstrators took over the Francisco Fajardo Highway in an effort to reach the more pro-government western section of the capital.

Some opposition supporters called on the international community to aid in securing a “change of government” in the South American country.

The maximalist demand of forcing early presidential elections has grown increasingly popular among sections of the opposition’s base.

According to Venezuela's Public Prosecution, 312 people were detained during the opposition protests, which once again saw masked demonstrators erect roadblocks, damage public institutions, and launch deadly attacks on state security personnel and bystanders.

National Ombudsman Tarek William Saab has confirmed that a National Guard sergeant, Neumar Jose Sanclemente (28), was shot and killed by a "sniper" Wednesdsay evening “in the middle of violent protests in Las Salias municipality” in Miranda state. Coronel Juan Carlos Arias was also wounded in the violent demonstrations that “took place since the early hours of the morning amid condemnation by local residents".

The killing of Sergeant Sanclemente brings the total number of dead in the recent weeks’ anti-government protests to seven, including two demonstrators killed by police and two bystanders shot dead by armed protesters.

In another incident, Venezuelan news website La Iguana reports that a National Bolivarian Police officer who fell off his motorcycle was attacked by demonstrators who allegedly pulled out four of his teeth.

In downtown Caracas, Almelina Carrillo, 47, is in critical condition after being reportedly struck in the head by a frozen bottle of water thrown from a nearby apartment building in downtown Caracas. As revealed by video footage, the woman was on her way to work when she was struck by the blunt object presumably launched at the nearby pro-government march below.

Chavista spokespeople blame the opposition for the incident, pointing to a tweet by the right-wing El Nacional newspaper columnist and Central University of Venezuela professor, Tulio Hernandez, who encouraged his followers to “neutralize” government supporters, alluding to the use of blunt objects like “flower pots” as weapons.

Responding to the president’s ordered deployment of Bolivarian militia as part of nationwide civil-military drills to safeguard national security known as Plan Zamora, Hernandez wrote Tuesday evening, “If every Venezuelan democrat neutralizes a member of Plan Zamora, they are militarily defeated. Even flower plants count.”

The Venezuelan Public Prosecutor's office has indicated that a total of 62 people were wounded across the country in the course of the day's mobilizations.

Three more people were additionally killed in various incidents not related to the Wednesday's protests.

Carlos José Moreno, 17, was shot in the head at approximately 11am in San Bernardino, one of Caracas’ most dangerous neighborhoods. He was rushed to a nearby hospital where he later died during surgery.

Family members of the victim confirmed that Moreno was not a protester and the death was unrelated to the nearby demonstrations. Venezuela’s Public Prosecution has ordered Metropolitan Caracas District Attorney Farik Mora Salcedo to investigate the incident.

Meanwhile, in Tachira state, authorities are investigating the death of Paola Andreina Ramirez, 22, who died of a gunshot wound to the chest. According to National Ombudsman Tarek William Saab, the alleged culprit, Ivan Alexis Pernia, has been detained by authorities in San Cristobal and has confessed to the crime. The 31-year-old businessman had reportedly opened fire at motorcyclists from his apartment when he accidentally shot and killed Ramirez. Venezuela’s Public Prosecution has announced that man will soon be indicted by local prosecutors.

Interior Minister Nestor Reverol declared that Pernia is an active member of Maria Corina Machado's party Vente Venezuela, though the  ultra-right group has denied the allegation. Neighbors of the victim have told El Nacional that Ramirez was not participating in the local anti-government protests.

In Ciudad Guayana, capital of Bolivar state, Euribe Ventura, 25, was stabbed and killed in the course of an attempted car robbery. Despite statements by opposition spokespeople that Ventura was killed in a demonstration, the local Correo de Caroní newspaper has confirmed that the death was “unrelated to the protest in Guayana”.

At around 2:30 in the afternoon, the administrative headquarters of Venezuela’s consumer protection agency, the National Superintendence of Socioeconomic Rights (SUNDDE), in Chacao was besieged by 50 to 60 masked protesters hurling stones and other blunt objects, considerably damaging the “service to the citizen” section of the building. Security camera footage shows the demonstrators breaking into the building and stealing computers, keyboards, other office items. 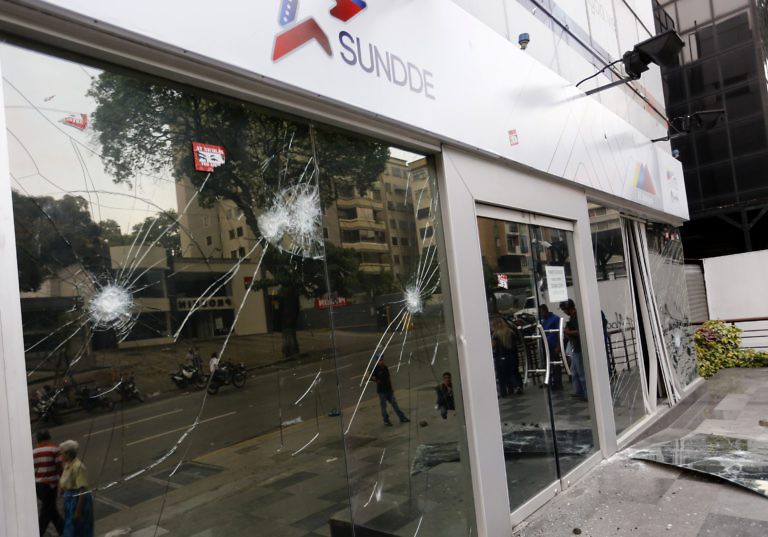 The SUNDDE headquarters in Chaco was defaced and robbed. (Henry Tesara/AVN)

SUNDDE head William Contreras called the attack a “planned action” and accused Chacao opposition Mayor Ramon Muchacho of being responsible for the incident, noting that the Chacao police module is only “50 meters” from the building, yet the local force “simply did not respond to these groups’ actions”.

“I want to point out the Chacao mayor’s direct responsibility, since it’s his municipality where this destruction of public institutions is occurring,” he declared on state television.

Elsewhere in Chacao, masked protesters attempted to break into the General Francisco Miranda Airbase in La Carlota, destroying part of the installation's fences. 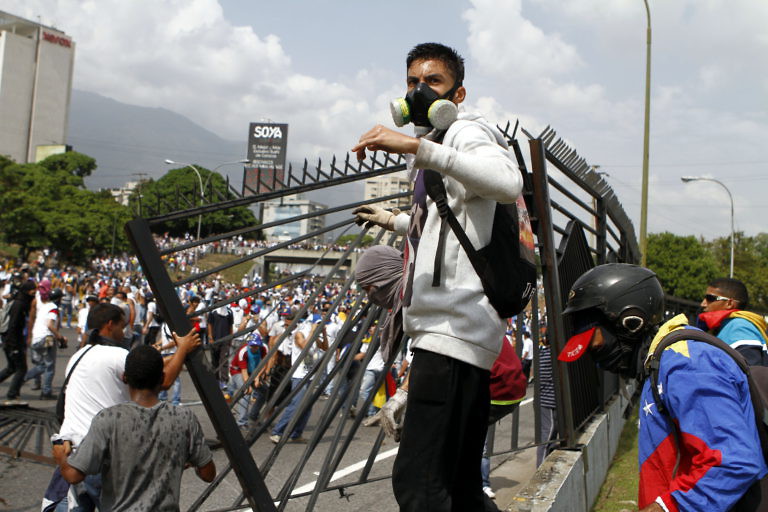 Nearby in Chacao’s Altamira neighborhood, demonstrators set fire to the emblematic British Tower, which houses several government entities, including the National Statistics Institute.

In the far-west city of Maracaibo, a Ministry of Housing office was the object of robbery and property destruction by alleged protesters.

The incidents are the latest in a series of violent attacks on government institutions and public property in recent weeks, including the April 8 assault on a Supreme Court administrative office in Chacao, which was reportedly planned by leaders from the right-wing First Justice party.

Wednesday’s demonstrations were preceded by opposition calls Tuesday for Venezuela’s Bolivarian Armed Forces (FANB) to “demonstrate that it stands on the side of the constitution and the people”.

“You should be part of the solution to the difficulties facing the country. Behind those shields are men who do not agree with is happening and want change,” declared National Assembly President Julio Borges, who insisted that the statement was not a call to rebellion.

Just a day before the demonstrations, a video of four soldiers publicly calling for a military rebellion against Maduro went viral on social media. The four army officials have since been detained and charged by military authorities.

Borges' declaration was roundly condemned by President Maduro, who called on the National Assembly head to be prosecuted for inciting mutiny.

“When [Borges] calls openly for a coup, for a division in the Armed Forces… for not recognizing its commanders… and its commander-in-chief, this is a crime that is clearly categorized in the country’s penal codes… as a call for a coup d'etat,” the head of state affirmed.

In response to the opposition statement as well as a US State Department communique issued Tuesday, Maduro ordered the activation of “Plan Zamora”, which saw civil-military exercises across the country Wednesday to guard against the threat of a “coup”.

As part of the plan, 100,000 members of Venezuela’s Bolivarian Militia – a semi-professional force of reservists under the authority of the Defense Ministry – will assist in internal security efforts.

In commemoration of the seventh anniversary of the militia this past Monday, Maduro announced the body’s expansion to 500,000 personnel as well as the provision of “one rifle for each militia member”.

This latest round of the tense government-opposition standoff was triggered by a pair of March 29 Supreme Court (TSJ) decisions that temporarily authorized the judiciary to assume certain legislative responsibilities. The rulings were denounced as unconstitutional by the country’s Attorney General and promptly partially annulled on April 1.

Despite the reversal, the MUD has accused the government of committing a “coup d’état” and convened ongoing protests, demanding initially the dismissal of the justices and subsequently radicalizing its program to include “general elections”.

This past Tuesday, the opposition-held National Assembly approved a resolution to select new TSJ justices notwithstanding the fact that unseating of the sitting magistrates must be approved by National Ombudsman Tarek William Saab, who declared on April 6 that there was no grounds for the removal. Nonetheless, the parliament moved ahead with the measure regardless, accusing Saab of “complicity with the crimes of the [TSJ] justices”.

With additional reporting by Rachael Boothroyd-Rojas.

Apr 21st 2017
Venezuela’s opposition has been accused of endangering the lives of more than 50 newborn babies, while at least 10 people have died in a riot.

Apr 18th 2017
FM Delcy Rodriguez has accused the 11 government that signed the declaration of hypocrisy.

Apr 17th 2017
“The orders were to set Caracas alight,” says a Venezuelan opposition leader involved in the past weeks' violent protests.

Nov 28th 2022
VA columnist Jessica Dos Santos reflects on a banking system that is very much tilted in favor of larger companies.
END_OF_DOCUMENT_TOKEN_TO_BE_REPLACED