Caracas, April 3, 2017 (venezuelanalysis.com) – Venezuela and Bolivia condemned Monday what they termed a “coup” in the Organization of American States (OAS) after an extraordinary session concerning Venezuela was held without the presence of the president and vice-president pro tempore in violation of internal protocols.

On Friday, OAS Secretary General Luis Almagro called a “special meeting” scheduled for Monday to discuss a since-reversed Venezuelan Supreme Court ruling that would have empowered the judiciary to assume parliamentary functions in light of the opposition-controlled National Assembly’s contempt of the constitution.

The meeting was, however, suspended Monday morning by Bolivia, which assumed the OAS Permanent Council’s rotating presidency Saturday, on the grounds that the Bolivian delegation “was not consulted and did not receive any information” regarding the session it was meant to facilitate.

In an official statement, Bolivia’s Foreign Ministry indicated that the session would be rescheduled “once the necessary coordination had been carried out in the framework of the OAS Charter and organizational norms”.

Despite the cancelation, at around 3pm in the afternoon a group of 20 countries decided to hold the meeting regardless, designating Honduras as “interim president” in the absence of the president, Bolivia, and the vice-president, Haiti. 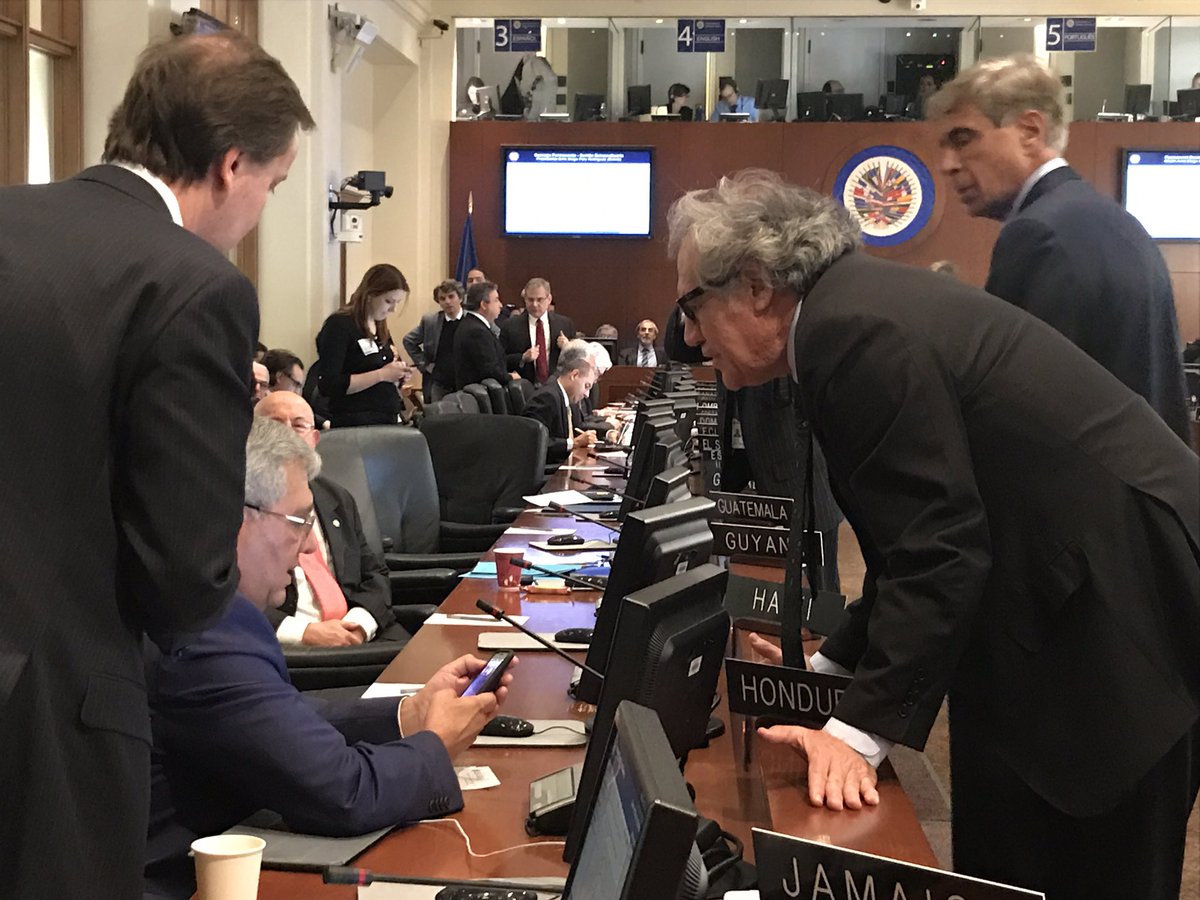 The move was sanctioned by OAS legal advisor Jean Michel Arrighi, who argued that in the absence of Bolivia the presidency could be exercised by the longest serving representative in the body, whom he claimed was Honduran delegate Leonidas Rosa Bautista.

However, screenshots of the OAS’ official delegate page uploaded by Venezuela’s OAS mission revealed that in fact Bolivia’s representative, Diego Pary Rodriguez, is the longest serving ambassador to the OAS. 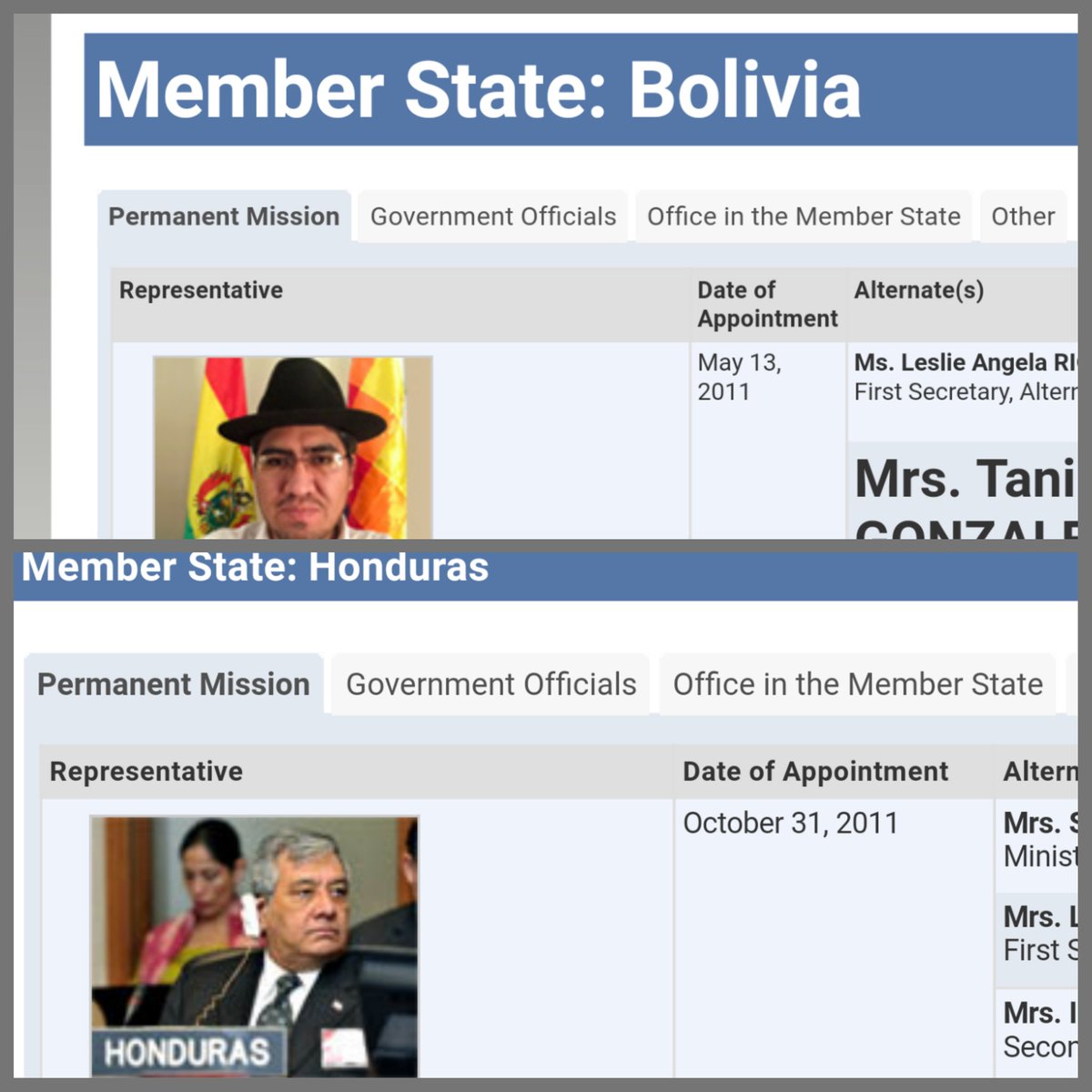 Delegate pages for Bolivian and Honduran missions to the OAS. (Twitter/@VenezuelaEnOEA)

Rodriguez, for his part, slammed the motion to go ahead with the session presided by Honduras as an “illegal” usurpation of its powers in violation of the organization’s internal statutes.

“Today what is happening is an institutional coup and a disregard for international norms,” he affirmed.

Bolivia, Nicaragua, Ecuador, and Venezuela all called points of order during the intervention of Argentine Foreign Minister Susana Malcorra in an attempt to abort the meeting. The representatives form Bolivia, Nicaragua, and Ecuador subsequently walked out of the session in protest.

Notwithstanding the objections, Honduras proceeded to open debate over a text presented by Peru that declared an “altercation of the constitutional order” in Venezuela and resolved to “urge action by the Venezuelan government to safeguard the separation and independence of powers”.

After nearly 24 minutes of debate, Venezuela’s delegate, Samuel Moncada, also walked out of the session, condemning the violation of the OAS Charter’s “principle of non-intervention” as well as the body’s internal rules.

In particular, the Venezuelan ambassador denounced Malcorra’s remarks during the session, after she called for neighboring countries to exercise “tutelage” over Venezuela to “ensure compliance with the electoral timetable”.

El Salvador similarly protested the “abnormal manner” in which Honduras assumed the presidency, urging dialogue as the only solution to the current standoff in Venezuela, a call that was seconded by the Dominican Republic.

Despite the dissentions, the Mexican delegation motioned for the resolution “to be adopted without proceeding to a vote”, a proposal that was also backed by Chile.

Canada’s ambassador, for her part, proposed for the vote to be postponed until Wednesday in order to have more member-states present at the session.

Ultimately, the resolution was not subject to an official vote, being instead approved by consensus with the support of just 15 of 35 member-states: Argentina, Brazil, Canada, Colombia, Costa Rica, Chile, United States, Jamaica, Mexico, Paraguay, Peru, Barbados, Guatemala, Panama, and Uruguay.

The resolution was roundly condemned as a “coup d’état” by Caracas and La Paz.

Speaking on national television Monday evening, Venezuelan President Nicolas Maduro called the move “a coup against the sister peoples of Bolivia and Haiti”.

“It’s shameful what they are doing, I think the OAS has gone on to become an anti-Venezuela, anti-Bolivarian inquisition court,” he asserted.

“Once again the OAS has become the Ministry of Colonies. An institutional coup has occurred to prevent Bolivia from exercising the presidency,” he said

The OAS Permanent Council is set meet again on Wednesday for an ordinary session, though it remains unclear if Venezuela will be on the agenda.

Nov 11th 2019
Government forces and grassroots movements are holding vigils across the country in support of Evo Morales.

Oct 3rd 2017
The Organization of American States (OAS) is preparing to swear in a “parallel” Venezuelan Supreme Court on October 13, members of the de facto...

Apr 18th 2017
FM Delcy Rodriguez has accused the 11 government that signed the declaration of hypocrisy.

Apr 3rd 2017
Venezuelan President Nicolas Maduro blasted the trade bloc’s silence regarding the killing of a protester in Paraguay and 90 percent disapproval of Brazilian “...

Apr 1st 2017
The country’s top court took the measure following an urgent meeting of the National Security Council, convened this past Friday night by President Nicolas...