Puebla, Mexico, September 15, 2016 (venezuelanalysis.com) – Venezuelan authorities said Wednesday they had melted down 17,000 firearms, and would use the scrap metal as material in public housing units.

During a public demonstration in Barquisimeto, Lara state, the thousands of arms were crushed in preparation for being melted down. The firearms included illegal weapons confiscated by police, along with others voluntarily handed over to authorities during government sponsored disarmament drives.

“The Bolivarian Revolution has destroyed more than 423,000 firearms so far. This is a significant figure to show to the world,” he said.

The country has long struggled with one of the world’s highest rates of gun violence.

“On the occasion of this day of peace, we want to show the country … the public act of the destruction of 17,014 firearms,” he said.

According to the interior ministry, scrap metal will be salvaged from the destroyed weapons, before being melted into steel bars for use as construction material in the Great Housing Mission (GMVV).

The GMVV was one of the key projects of the Hugo Chavez presidency, and today provides Venezuelans with low cost public housing. Impoverished families are given preference, and often pay almost nothing for the homes. Government figures suggest 184,000 GMVV units were constructed in 2015 alone, and President Nicolas Maduro has said he hopes to have as much as 40 percent of the population living in the low cost housing by the end of the decade.

Wednesday’s public gun crushing in Lara state coincided with an event inaugurating a monument to peace in Caracas. Shaped like a dove, the Monument to Disarmament itself was constructed with 1.5 tonnes of material salvaged from firearms.

“It consists of 814 parts and pieces of firearms that were once used in crime and violence, and which are now part of a beautiful monument,” Reverol said. 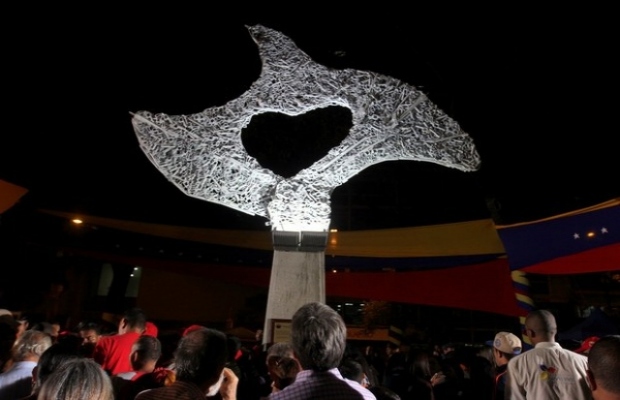 (The monument was constructed with material from hundreds of firearms. Photo: MPPRIJP)

Jan 1st 2016
Venezuela's "Great Housing Mission" has created one million homes since the housing mission was launched by former President Hugo Chavez in 2011.

Nov 27th 2013
30,000 security cameras will be installed across Venezuela under a scheme inaugurated by President Nicolas Maduro on Tuesday, amid ongoing efforts to tackle...

May 25th 2012
From 1 June the commercial sale of firearms and ammunition will be banned in Venezuela, confirmed Venezuelan Justice and Interior Relations minister Tareck El...

Sep 20th 2021
The organization voiced its “rejection” of US-led sanctions and promised greater action against climate change and for better Covid-19 vaccine...

Sep 19th 2021
A founder of Venezuelanalysis reflects on the website’s project and its evolving relationship with the Bolivarian Process.

Sep 16th 2021
The business guild complained that the blockade has hurt US corporations.

Sep 15th 2021
Caracas nonetheless took exception to the “politicization” of the High Commissioner’s report for its “use of sources with little...
END_OF_DOCUMENT_TOKEN_TO_BE_REPLACED

END_OF_DOCUMENT_TOKEN_TO_BE_REPLACED

The Blockade Against Venezuela: Measures and Consequences