Uruguayan writer Eduardo Galeano died on Monday at the age of 74 (vtv).

“Eternal glory to Eduardo Galeano, may he never die for us and may he continue to educate generations of Our Americans,” stated the head of state during his weekly television programme, Contacto con Maduro, where he also publicly asked his Education Minister to start drafting up the programme for the Venezuelan curriculum.

“Comrade Hector Rodriguez, Education Minister and Vice-President for Social Areas, I believe that given the departure of Eduardo we are obliged to, and I want this to happen, to create a special study and education plan on the works of Eduardo Galeano for all primary and secondary school education in Venezuela. A special Eduardo Galeano Plan that will be taught to these children in fifth and sixth grade, teaching them his poetry, his novels and his books,” added Maduro.

The presidential initiative follows the release of an emotional official declaration from the Venezuelan Foreign Ministry (full text below) paying homage to the Uruguayan writer and thanking him for his solidarity with the Bolivarian revolution and the struggles of Latin America’s poor.

Maduro had also previously taken to Twitter to express his condolences on the death of Galeano, which was met with an outpouring of messages and tributes from activists across the world.

“Maestro Galeano, from this trench of our homeland we will always take you into battle. Our America will live and it will triumph!" 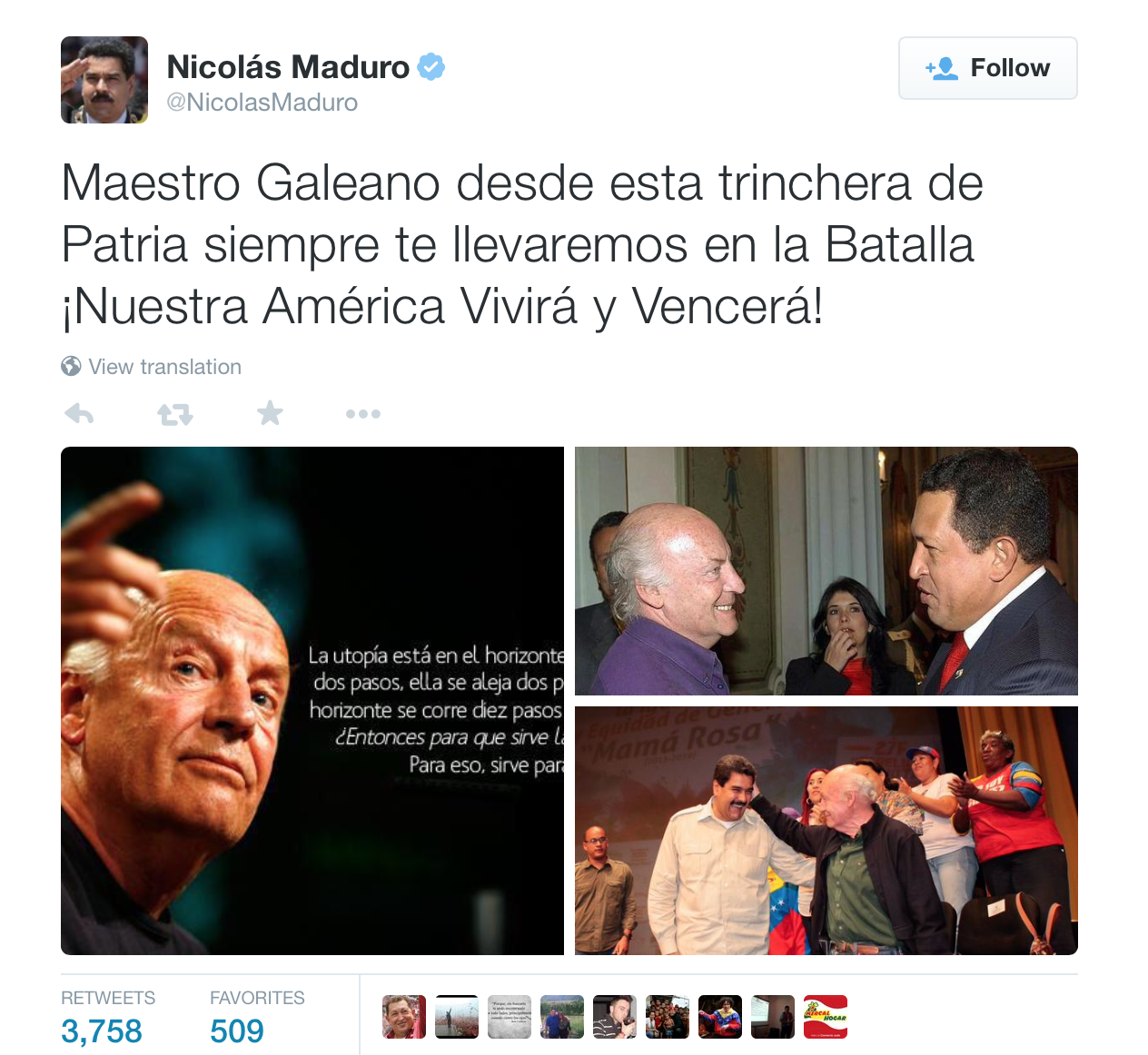 Galeano is known to have influenced the wave of progressive political leaders who are presently heading what has been referred to as Latin America’s “second  independence”.

Former Venezuelan President, Hugo Chavez, famously gave a copy of “The Open Veins of Latin America” to U.S. President Barack Obama at their first meeting at the Summit of the Americas in Trinidad and Tobago in April 2009.

President Nicolas Maduro and the government of the Bolivarian Republic of Venezuela, in the name of the Venezuelan people, lament the physical disappearance of the philosopher and writer, Eduardo Galeano. The loss of this man, so committed to the cause of the poor in Our America, leaves a profound mark in the emotions of the people of the whole continent.

The people could always find representation through his pen and his burning and precise verse, and they became visible in a world which tried to conceal them. We felt the beat of the redeeming energy of The Open Veins of Latin America in his words. The precision of his analysis and interpretation allowed us to understand that the world is upside down. His stories, chronicles, predictions, dreams, memories and what he chose to forget brought the world a different perspective on Latin American history. We saw ourselves reflected in his books and in his unwavering commitment to the cause of historic justice.

The Venezuelan people will always remember the commitment that Eduardo Galeano always showed towards the Bolivarian Revolution and to our eternal commander, Hugo Chavez. In each of his actions he always accompanied our struggles, the struggles of the people.

At this moment we remember that his last political action was to put his signature to the petition asking for the annulment of Barack Hussein Obama’s imperial decree in the defence of Bolivar’s homeland, accompanying millions of others who came together in defence of our independence and sovereignty. Thank you Galeano! Thank you in the name of our people.

Today we bid farewell to Eduardo Galeano, but we do it with the joy of knowing that we will continue to dream with the ideas that he left us and which have permeated the deepest part of our consciousness. Our homage to him will be to deepen our efforts for a more just world, for a united Latin America in favour of the people. In conclusion, and in the very words of this distinguished man of our time, “We are what we do to change what we are”.

Honour and Glory to Eduardo Galeano!

Nov 28th 2021
Our latest infographic offers a detailed look at the recent Venezuelan regional and local elections, as well as their implications.

Nov 27th 2021
On the 24th anniversary of her death, we look back at Argelia Laya's life and work in Venezuelan popular struggles and her call for women's liberation...

Nov 26th 2021
We talk to the singer and songwriter about the intersection of art and politics in his work and about his father, Alí Primera.

Nov 24th 2021
Caracas said US imperialism and its allies were the “big losers” following regional and local elections.
END_OF_DOCUMENT_TOKEN_TO_BE_REPLACED

END_OF_DOCUMENT_TOKEN_TO_BE_REPLACED

Back to the Ballot: Venezuela's Regional and Local Elections

Venezuela: ‘Mega-election’ Campaign Wraps Up with Large Rallies Across the Country