Merida, 30th April 2014 (Venezuelanalysis.com) – Yesterday, President Nicolas Maduro announced a 30% increase in the minimum wage and pensions. For the first time, the Bolivarian government’s May Day increase is less than annual inflation, which was at 57.3% in February, with March experiencing 4.1% inflation.

Maduro said he would evaluate a further increase in the last quarter of this year. Unlike previous years, the 30% increase will be applied on 1 May, rather than being broken up and applied incrementally. Other wage levels should be adjusted based on the new minimum wage.

Maduro expressed confidence however, that the inflation rate would slow down, following his recent meetings with “businesses who want to produce”.

He said, “I trust in the good policies that we are implementing, and that by the end of this year we will be overcoming, strangling, the perverse inflation induced [by economic sabotage] and we will have a good balance in the prices of products and services”.

The president made the announcement during a peace conference meeting with worker representatives. There, he also announced other measures, including the creation of a presidential commission to enforce the work law, passed two years ago. The work law provided workers with a range of rights; it made outsourcing illegal, awarded paternity leave and longer maternity leave, the right to workplace childcare, transport to work, made it harder for workers to be fired, and more. Maduro said he hoped to “end with outsourcing” by next year.

Maduro also announced that the work ministry will now be called the Ministry for Protection of the Social Process of Work. He said the name change was part of “a permanent renovation of the social structures, of the government”.

Opposition governor of Miranda state Henrique Capriles, said the wage increase was “lacking” and that “with this inflation... it doesn’t improve the conditions of our workers”. He blamed the government for the current high inflation rates.

However, last night Maduro commented on opposition leader demands for a higher wage increase, saying, “they propose things that they know they would never implement if they were in the [national] government, because they don’t even fulfil the collective contracts where they are governors and mayors... they don’t have the right to talk because they have never earned a salary with the sweat of their work and efforts, this bourgeoisie don’t know anything about it”.

The president of Venezuela’s chamber of commerce, Fedecamaras, Jorge Roig said the chamber was “consulted sufficiently in advance” about the wage adjustment, and had “hoped it would be moderate”. Roig said the increase was “responsible”.

Maduro called on people to march on May Day, “The first of May we’re invited to a large national mobilisation... if the world wants to see who the working class stand with, they should open their eyes on May Day so they can see that the working class is with the Bolivarian revolution”. 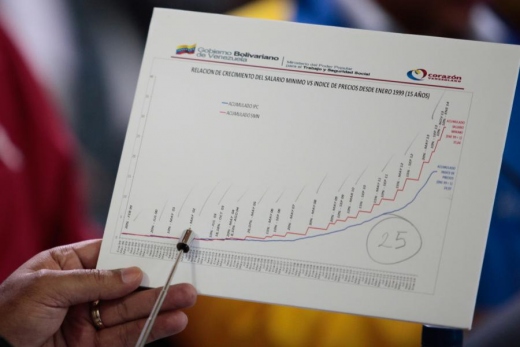 May 4th 2015
Venezuelan President Nicolas Maduro announced a 30% minimum wage hike on Friday as part of his government's ongoing efforts to support workers amidst economic...

May 2nd 2014
In his May Day speech at a large rally in Caracas, President Nicolas Maduro announced the extension of social programs and benefits to workers and the...

Jan 7th 2014
Yesterday President Nicolas Maduro announced a new minimum wage increase of 10%, to be applied as of this month.

Sep 1st 2013
Venezuela’s second minimum wage increase of the year came into effect today, provoking renewed focus on inflation and the state of the economy.

May 9th 2012
Venezuelanalysis.com brings readers this detailed, chapter by chapter summary of the new Organic Law of Work and Workers (LOTTT), a law which has been under...

Jul 6th 2020
Eleven people, including the ad-hoc Central Bank board, are charged with “usurpation of office” following the “plunder” of Venezuela...

END_OF_DOCUMENT_TOKEN_TO_BE_REPLACED

The US Embargo and Its Effects on Venezuela