Merida, 23rd April 2014 (Venezuelanalysis.com) –Military chief Vladimir Padrino said yesterday that the violent street blockades which began in February have moved on to a “second phase” characterised by “selective attacks and terrorist cells”.

“They are continuing the selective attacks on public transport units,” he said.

Padrino argued that the “first stage... in the continuous coup d’état” was the barricades, and also calls to high ranking military personal to organise the removal of President Maduro. Three air force generals were arrested at the end of March for allegedly planning a coup.

Rightwing Venezuelan newspaper El Nacional also reported yesterday that opposition supporters met in the Catholic University Andres Bello to announce a “second stage of protests” which would start this Saturday 26 April with a march. The supporters are part of a minority of the opposition which is still refusing to participate in the dialogue with the national government.

Participants in the meeting claiming to be students, wore maroon t-shirts with phrases such as “reconcile the country” and “recover democracy”. Carlos Vargas, secretary of external affairs at the university asked that the university be “revived”, and called for “lightening”, or spontaneous and “creative” protests to not be abandoned.

Further, a pro-government student leader of the Central University of Venezuela (UCV), Alejandro Padron, told the national public youth radio (RNV-Juvenil) yesterday that the Venezuelan opposition was planning to “intensify” its actions in coming days.

The student said the opposition sectors were planning to consolidate their plan of “198 steps to overthrow the government of Nicolas Maduro”. Padron argued that the plan is based on Gene Sharp’s text, which details how to overthrow democratic governments through destabilisation and media manipulation, “using the youth as cannon fodder”.

Padron described three types of actions he believes the opposition violent sectors are planning: “firstly... a plan of selective killings, which aims to kill students, well known sports people, and youth who are dedicated to the arts... in order to create a climate of anxiety in the population. It will be carried out by paramilitaries who are in various zones of Caracas, especially Sucre municipality, governed by the opposition”.

He said the second step involved supporting the “shock troops” of the private and autonomous universities, using “so called students who are really political cadre of [political parties and organisations] First Justice, Javu, Red Flag, Popular Will, and Democratic Action – paid by their parties to pretend to be students”.

“They are aiming to infiltrate the [government supported] open studies programs and the UNEFA, UBV, UNEARTE, and others,” Padron claimed.

Padron said that the third step involves the Popular Will party “buying people off to involve them in the violent plan”.

“There are already cells spread out in various parts of the country. In Caracas they are divided up into blocs, for example, the Resistance Bloc South-East Caracas, among others. However, they haven’t been able to penetrate the west [of Caracas], but they trust the UCV for that... its autonomy allows it to conduct various actions, with the complicity of the authorities,” Padron said.

A Tachira court imposed a custodial sentence on Leininger for allegedly dealing in arms, criminal association, and foiled (attempted) homicide.

According to Tachira governor, Jose Vielma, Leininger was supporting the blockades. He told the press that Leininger’s phone had photos of himself and his Venezuelan wife participating in the blockades. He said that Interpol Venezuela was in contact with the US’s NCA (National Command Authority) to exchange information about the arrested man, who he claimed is sought internationally for committing crimes in the US as well.

Minister for justice, Miguel Torres also announced yesterday morning that nine people involved in violence in Chacao, Caracas, were also arrested. Torres said authorities had raided ten houses of people supposedly involved in the violence, three of those houses in Chacao and the rest in other areas, and nine people were arrested. He said there would be a further 15 raids in order to “end with terrorist actions in Chacao”.

Allegedly, one of the people arrested yesterday was in charge of paying the barricaders Bs 5000 per week, according to Torres. He said the man “will have to say who supplied him the money to pay these violent groups”. 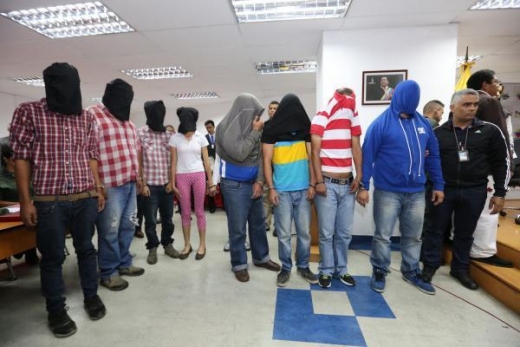 Some of the people arrested yesterday (YVKE)

Two people were also arrested after a cement mixing truck was set alight in Valencia on Monday afternoon. According to Padrino, “terrorists in balaclavas” set it ablaze. Aporrea reported that witnesses said the violent groups also set up barricades near the truck to stop traffic flow. 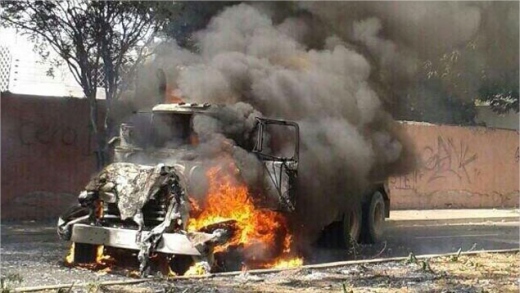 The cement truck in Valencia (agencies)

Today the national government handed out new buses, made in China, to eight drivers in Merida and Tachira states who lost their means of earning a living when violent groups set their buses on fire.

Merida based community television, Tatuy TV, reported today that a policeman and a taxi driver had been attacked “by the rightwing yesterday” and injured by gun shots in Avenue Las Americas when authorities and communities tried to clear barricades. Also, a balaclava wearing youth was also injured and taken to hospital after he mishandled a homemade grenade launcher or mortar. 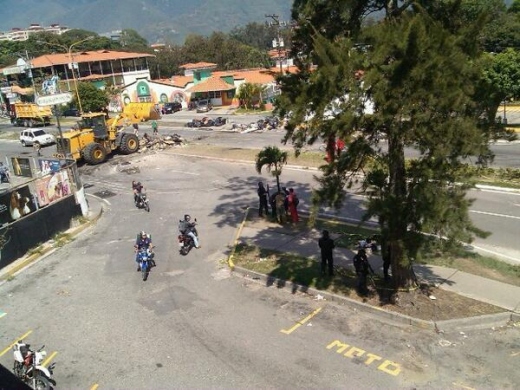 Venezuelan foreign minister Elias Jaua announced today that he had made a formal complaint to the UN Organisation for Education, Science, and Culture (UNESCO) about violence by some groups in Venezuela.

“We’ve just come from the headquarters of Unesco, we’ve just finished a meeting with the director general (Irina Bokova), and we’ve shown the whole situation that the Venezuelan people are experiencing... facing an anti-democratic, violent, and armed current which has harmed fundamental rights like education and communication,” Jaua told public television station VTV.

“We’ve denounced the attitude of elected authorities who, having constitutional commitments and obligations in terms of protecting human rights, have acted in a contrary manner, promoting violence, as is the case with the [former] mayor of San Cristobal (Daniel Ceballos), the mayor of San Diego (Enzo Scarano) and others, or by omitting to fulfil their role of guaranteeing life and rights... such as is the case of the governor of Miranda state, Henrique Capriles, the mayor of Chacao, Ramon Muchacho, the mayor of Baruta, Gerardo Blyde, and the mayor of El Hatillo, David Smolansky,” Jaua stated.

Jaua clarified that the government wasn’t requesting international intervention, “we’re just making a record of” the actions of local authorities.

He said the government would also be denouncing environmental damage, such as cutting down trees, and attacks on the food distribution system to the UN’s Food and Agriculture Organisation (FAO).

Apr 25th 2014
The third dialogue talk between the Venezuelan government and opposition has produced more results, while the armed forces have largely “liberated” another...

Apr 21st 2014
Hard-line opposition protests continued over Easter weekend in Venezuela. However a recent poll found that the majority of Venezuelans support the peace talks...

Apr 19th 2014
Opposition groups have clashed with police in Venezuela's capital ahead of planned Easter-themed demonstrations.

Sep 23rd 2021
The ex-PDVSA chief, accused of corruption, said the ruling was based on his “refugee status.” Venezuelan authorities have yet to comment.

Sep 22nd 2021
The Venezuelan president called on the global community to reject neo-colonialism and imperialism and build a peaceful and multipolar global order.

Sep 21st 2021
The producers pointed the finger at the private management for the plant's paralysis and vowed to “rescue” it.

Sep 20th 2021
The organization voiced its “rejection” of US-led sanctions and promised greater action against climate change and for better Covid-19 vaccine...
END_OF_DOCUMENT_TOKEN_TO_BE_REPLACED

END_OF_DOCUMENT_TOKEN_TO_BE_REPLACED

The Blockade Against Venezuela: Measures and Consequences