Diosdado Cabello, the vice president of the United Socialist Party of Venezuela (PSUV), has just given a press conference with the rest of the government's “Bolivar Chavez” electoral campaign team. He said that according to the estimations of the PSUV on the performance of the Great Patriotic Pole (GPP) coalition’s candidates, they were “very happy”. The leaders of the PSUV appeared in high spirits.

The five rectors of the National Electoral Council (CNE) are currently in the CNE totalling centre in Caracas, and will give a “first bulletin” announcement of results as soon as enough votes are totalled to make the tendency of victory “irreversible”.

According to the minister of justice and interior affairs, Miguel Rodriguez, there were a total of 141 electoral infractions today, which he considered a “tiny figure”. The offenses were mainly related to people who didn’t deposit their ballot paper in the box as the voting process requires.

One of the five rectors of the National Electoral Council (CNE), Vicente Diaz, has just said in a press conference that the first results will be announced by the CNE in roughly three hours time.

A few voting centres still remain open due to there still being voters waiting to vote, and Diaz said that turnout had been “historic” in terms of Venezuelan municipal elections.

The CNE official also reported that there had been “few” notable incidents during the voting process, and that citizens had behaved “adequately”.

Diaz also recognised the work of the armed forces in maintaining public order during the day. 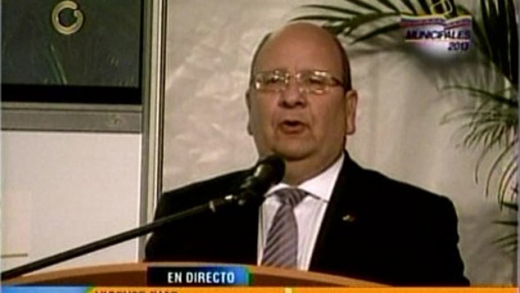 At the Libertador high school in Merida, the scene of large military tanks, protests and some minor violence in the April presidential elections, kids played on their bikes and skates as the centre closed. A centre with strong opposition support, the scene tonight contrasted strongly with the last elections. At 6:02 the last trickle of people went in to vote, then the voting centre head declared it closed.  Those standing around clapped. Observers waited patiently outside to go in soon and observe the vote checking.

"The booth opened a little late, at 7:50 am, but it was very quick, very efficient, everything was as it should be, and ten minutes later I had finished voting. There were no tricks, no problems, it was all very well organised," one witness, Gilmer Andila told VA. 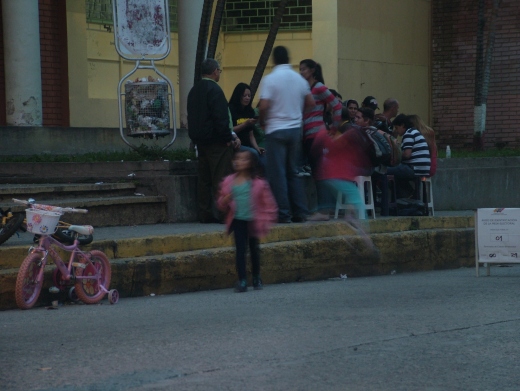 Children playing where in April there were large tanks, outside the Libertador highschool voting booth, Merida (Tamara Pearson / Venezuelanalysis.com)

6.00 pm has passed, meaning that polling stations where there are no more people waiting to vote will now close. However Venezuelan media are reporting that in some parts of the country, including the capital Caracas, there has been an increase of people turning up to voting centres in the afternoon, and that many polling stations are remaining open to allow everyone to vote who wants to. The first results could be announced by 8pm.

The opposition MUD coalition is estimating that around 60% of citizens have voted. Turnout for the last municipal elections in 2008 was 65%.

President Maduro has said to media that the results announced by the National Electoral Council (CNE) will be “sacred”. “I ask those who win, that they win with honour and respect for their adversary, and that those who lose accept their defeat,” he said.

Opposition leader Henrique Capriles meanwhile commented that voting is what makes the rectors of the CNE “hurt”. Accusing the CNE of bias toward the government, he argued that voting could be a “goodbye gift” to the CNE’s top officials.

Venezuelanalysis.com’s journalist in Caracas reports polling there to be peaceful and calm. At mid afternoon there were moderate sized queues to vote in the Bellas Artes area, and the National Electoral Council (CNE) expects turnout to be similar to past municipal elections.

According to a CNE official at the Andres Bello High School in Caracas, the largest polling station in the country, voting has been efficient and the first results can be expected around 8pm. Voting centres will close at 6pm if there are no more people waiting outside to vote. The final results should be announced by midnight.

President Nicolas Maduro has indicated to press that some results “may deserve waiting for a little”, suggesting that some important mayoral contests could be close.

Opposition leader Henrique Capriles has also now exercised his suffrage, during which he urged opposition supporters who had not yet voted to turn out and do so. 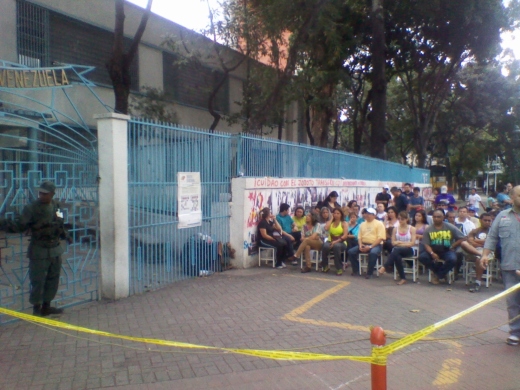 The queue outside a polling station this afternoon in Bellas Artes, central Caracas. A local CNE official described the voting process today as “calm” and “quick”. (Ewan Robertson / Venezuelanalysis.com)

“Today is a day of active participation, of a people that always holds the decisions of the fate of the country in their hands,” Maduro told the press.

The president also called on all parties to respect the outcome of the vote.

“Whoever wins, do so with honor, and the losers to accept defeat,” he stated.

VA has observed, and others have also commented to us, that there is a different mood at the booths these elections. While in April there was a noteable tension - something unusual in Venezuelan elections, which usually feel peaceful and festive - this time there is little tension. In April opposition supporters seemed ready to protest, even quiet violently, this time there is not that sense, though VA will stay alert.

“Observers from South Africa, Mexico and Guyana...said that they couldn't fault the system, and it's the best they've seen,” Greatorex said from Caracas.

He continued by stating that these were experienced electoral monitors who have observed numerous elections all over the world. Greatorex also told VA that he has been actively seeking out the opinions of opposition witnesses. All of the opposition monitors he has spoken to “haven't seen any fraud”, Greatorex said.

So far Plan Republica, with 80,000 national guards looking after voting booths as well as air and land patrols of the borders, has registered just six electoral crimes nationally. In Bolivar state one woman tried to vote for herself and for her husband. In Vargas, Barinas, Bolivar, and Cojedes, there has been one incident each of voters trying to swallow or tear their vote reciept before depositing it in the CNE box.

"The report is very positive, all of Venezuela is voting respectfully and peacefully," CNE head Tibisay Lucena said. She also stated that 99.99% of voting booths have now opened.

16,880 candidates are competing for mayoral and councillor positions. There are also 253,000 volunteer witnesses, for both political sides as well other parties and independents, observing the voting.

Below, a map showing the current municipal landscape. 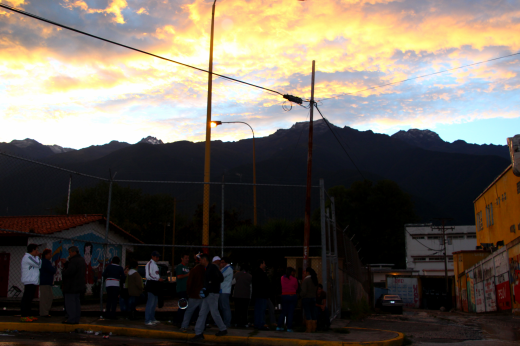 Approximately 85% of voting stations had opened by 7:45 am, CNE head Tibisay Lucena has told VTV. According to Lucena, voting has mostly been smooth, with the most delays taking place in states such as Portuguesa and Vargas; where the largest number of delays are typically reported.

One voting station that wasn't open by then was at Merida's Emiro Fuenmayor school on Avenue Las Americas, where voting started about ten minutes after Lucena made her announcement. Soldiers at the gate informed VA the delay was due to some booth workers not arriving. In Venezuela, many of the booth workers are selected in a system similar to jury duty. 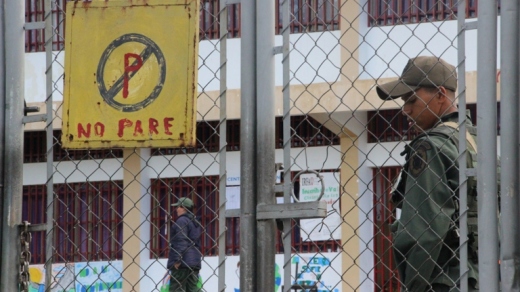 Although a few voters expressed frustration at the delay, most didn't appear concerned.

“This didn't happen in the April [presidential] elections,” one woman waiting in line told VA. She shrugged, and said she didn't mind because once inside the booth, voting “is very quick”.

“It takes less than one minute to vote,” she said.

Voting commenced just before 8 am.

“[The system] is very good,” another voter told VA after casting her vote. 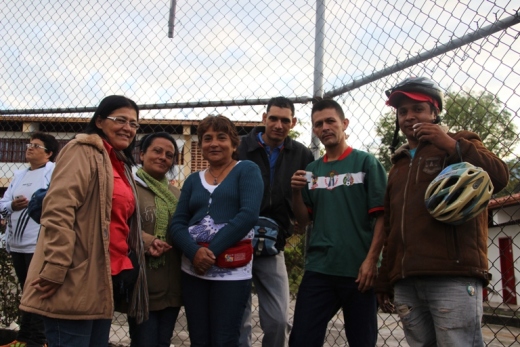 Although some voters complained about the delay, most were upbeat. (Ryan Mallett-Outtrim/Venezuelanalysis)

Voting is underway peacefully across the country, with no untoward incidents reported in Venezuelan media. Researcher Harry Greatorex, an official election observer with the National Electoral Council (CNE), reported the situation at a polling station in Socialist City Caribia to Venezuelanalysis.com

“Everything is normal and peaceful voting here in Ciudad Caribia, there are no big queues and it’s still quite early, with less than thirty people in the queue to vote,” he said.

President Nicolas Maduro has tweeted to supporters , “All we patriots let’s go to vote, to give a victory to our comandante [Hugo Chavez] this day and guarantee peace and the future of the homeland”.

Meanwhile opposition leader Henrique Capriles said earlier, “Today we have in our vote the opportunity to decide what our future will be, of our families, of our communities”.

VTV reports that the Diana was played as early as 3 am in other states, such as Guarico, Apure, Carabobo, Anzoategui, and parts of Caracas.

"Peace will prevail over violence... over those who want to change the agenda, we're going to keep living in peace as the Venezuelan people have outlined their destiny," one Diana participant in Tachira told VTV.

Voting centres continue to open, with large queues already outside some of the bigger ones.

In the barrio of Santa Anita, Merida, the Diana and fireworks went off at 3.30am and at 4.30am. The voting booth in the local school opened at 6.10am. With the sun coming up, the mood was relaxed, and the military that are safeguarding the booth as part of the Plan Republica helped voters find their voting room.

This time the voting booth is just a little different, in that there are many huge posters outside cleary explaining the various regulations.  This sort of information is on top of the usual voting rehearsals and stalls all over the country where people can practice voting and ask questions. The posters cover the following topics: functions of the coordinator of the voting booth, functions of the Plan Republica military, electoral guarantees, citizen verification, security norms, the voting process, and voting with a companion. The latter is for people with disabilities or who can't read, who need someone to help them vote. This was a point where Henrique Capriles alleged there are had been fraud in April. The poster clearly states that those who help someone to vote, can only do so once. 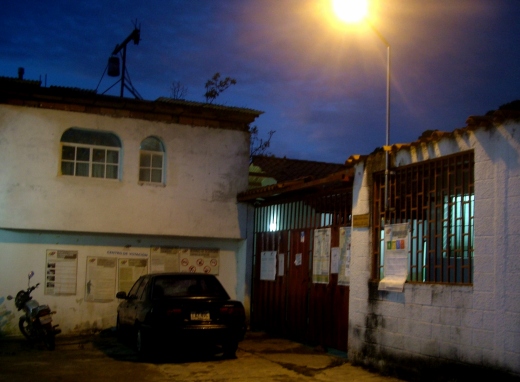 At 5:45am, this booth in Santa Anita Merida, is ready for voters. The new posters are visable at the entrance (Tamara Pearson /Venezuelanalysis.com) 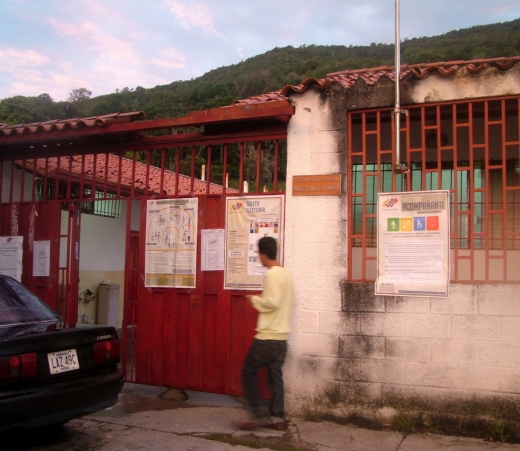 Dec 6th 2013
Campaigning for Venezuela's municipal elections ended on Thursday, with a final round of peaceful rallies taking place across the country.

Nov 24th 2013
What are the stakes for both Chavismo and the opposition in the upcoming municipal elections, and is it accurate to see the elections as a type of “plebiscite...

Nov 5th 2013
The opposition has released a video, in the form of a “message” from former presidential candidate Henrique Capriles, which reveals their approach to the...

Jan 25th 2023
Regional leaders also called for an end to the decades-long US blockade of Cuba.
END_OF_DOCUMENT_TOKEN_TO_BE_REPLACED