Venezuelanalysis.com is 100% reader funded and independent. It is only through the support of readers like you that we are able to stay online. Donate and support independent news and analysis.

In a world where the corporate media coverage of Venezuela parrots the US State Department’s official line, telling the truth becomes a subversive act!

Hugo Chávez hit the nail on the head with a memorable quote: The Truth is Subversive! The former president said it on more than one occasion and, as a politician, educator and critical commentator, he always lived up to it.

Despite the diplomatic rapprochement between Washington and Caracas driven by the current global energy crisis, US imperialism remains fixated on regime change in Venezuela. 2022 has seen Washington refuse to end its brutal economic blockade on the country. These unilateral coercive measures have inflicted damage in every aspect of the nation’s economy, taking a toll on the population so large that it can only be called collective punishment.

This US aggression has counted on a body of narratives that range from biased to outright false. “The 2018 election was fraudulent,” “sanctions only affect Maduro and his allies,” “the US-backed opposition has overwhelming support,” etc. With our non-stop reporting, our mission is to subvert that narrative. Moreover, we amplify the voice of the Venezuelan popular organizations which continue to show their bravery and creativity to build socialism.

We do this with a hard-working on-the-ground team that is nothing short of extraordinary.

The rise of the left throughout Latin America in recent elections has improved the outlook for the region. Gone are the days where Washington had a menu of lackeys to do its bidding. The restoration of bilateral economic and diplomatic relations between Colombia and Venezuela, the return of Lula to the presidency in Brazil, the death of the Lima Group, all bode well for Venezuela’s anti-imperialist efforts.

However, a more progressive regional context is not enough. In fact, solidarity movements have played a crucial and tireless role in opposing and denouncing the US-led economic war on the Venezuelan people. But Venezuela needs your continued solidarity!

Venezuela needs you to continue to help disseminate the subversive truth. 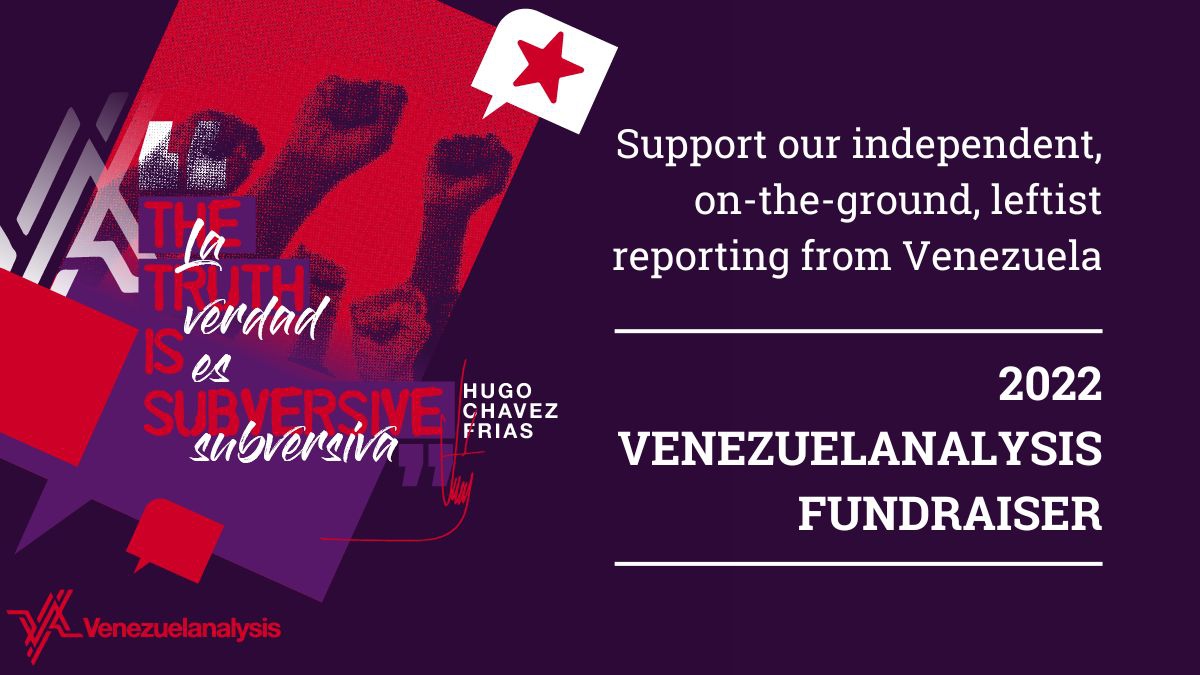 This is where Venezuelanalysis comes in. Our news, analysis, interviews and multimedia pieces counter and challenge the corporate media narrative on a daily basis. We produce content that will help the English-speaking audience understand sanctions and their deadly consequences, as well as give solidarity activists “weapons” for their struggle.

But we need your help to keep it up at Venezuelanalysis! As an independent outlet, we are entirely reliant on support from readers like you. A $10, $20 or $30 a month contribution goes a long way to sustain our grassroots journalism.

Consider backing our efforts. No donation is too small! With an increased presence on social media, a new podcast in full swing analyzing the country’s most pressing issues, and a new video postcard series and a lot more coming up, your support is now more important than ever.

Click on the following buttons to donate or subscribe through your preferred method. If you want to send a check, email us at

Venezuelanalysis has always been my go-to source to get the truth about Venezuela from the people's perspective. It is a 100% donor-funded, grassroots organization that tells you the other side of the story. Supporting their work is needed now more than ever. Please donate to Venezuelanalysis to keep their voice alive.

One part of the defence against imperialism is the media project Venezuelanalysis. To support the website is to help it offer a robust sense of the Bolivarian Project. It provides an avenue to undermine the information war that is beamed from Washington. So help support Venezuelanalysis. It is one thing to criticize imperialism, it is another to help build an alternative.

Venezuelanalysis one of the best, if not the best outlet to get news on Venezuela. It's a phenomenal source! It helps fight against the endless barrage of propaganda coming from all of our corporate media sources. If you want real, legit information on what's happening in Venezuela, then go to VA and help support them.

In the United States we get almost no news about what's going on in the rest of the world, especially what our government is doing to interfere in other countries. That's why it's so important to support Venezuelanalysis so we can really learn what's going on in Venezuela, the role our government is playing and organize people to stop US intervention.

“Venezuelanalysis.com has regularly provided very useful description, analysis, and commentary on developments in Venezuela, rarely available in the US or the West generally, and valuable for a balanced understanding not only of Venezuela but of Latin American generally in the current very exciting phase of its history.”

Documentary Filmmaker (“War on Democracy”) and author of Freedom Next Time (Bantam, 2006)

"Never has a country, its people, its politics, its leader, its myths and truths been so misreported and lied about as Venezuela in the past decade. Not only has Venezuelanalysis done much to correct this with its scrupulous attention to facts, both obvious and concealed, it has opened up a unique space for genuine critique of one of the world's most imaginative popular movements. I can't think of another website on the web more deserving of support."

"Venezuelanalysis has been an essential tool not just for those trying to keep up to date with developments in the Bolivarian revolution, but also because it provides an invaluable space for critical discussion about the process. This is particularly important given the role that the media plays in opposing the advances of the people. For this reason alone, the Venezuelan revolution needs websites like this, which in turn need your support to keep going."

Editor of Monthly Review (New York), Professor of sociology of University of Oregon

"For years Venezuelanalysis.com has been the gold standard in reporting on Venezuela and the Bolivarian Revolution. Its independent, critical reporting is always balanced and provides far more in the way of in-depth information and insights on Venezuela and other ALBA nations than any other single English-language source. It is notable in giving voice to grassroots movements. With so much distortion in the U.S.-dominated international media, Venezuelanalysis.com's continuing public role is essential. Recent attempts by Facebook to take down the Venezuelanalysis.com facebook page are therefore a grave concern. With Venezuela increasingly subject to economic sanctions imposed by Washington, it is all more essential that this independent voice be preserved. Please support this indispensable outlet."

"Venezuelanalysis has been an indispensable source for many of us for well over a decade."