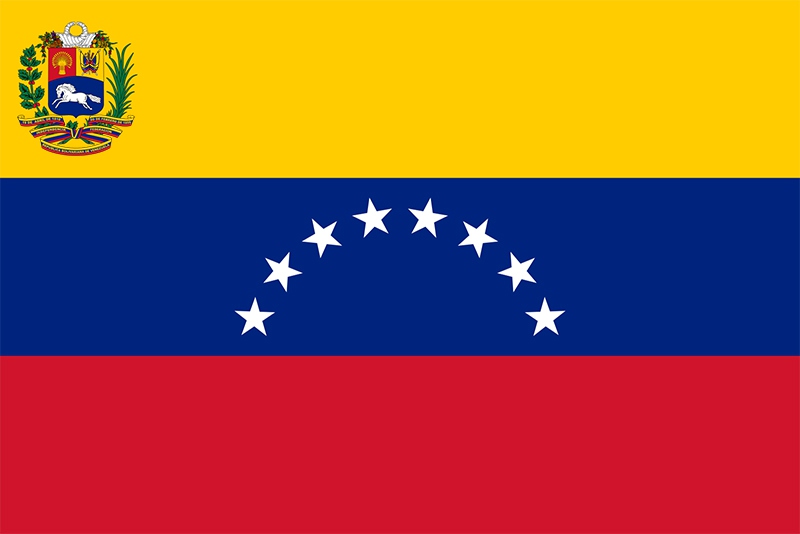 The Bolivarian Republic of Venezuela is a Latin American nation with a culturally and ethnically rich and diverse population, and enormous natural resources. Independent for more than 200 years, Venezuela began an important process of social and political change under the presidency of Hugo Chávez (1998-2013). Chávez’s revolutionary project was based on participative democracy, popular protagonism, anti-imperialism, and socialism. 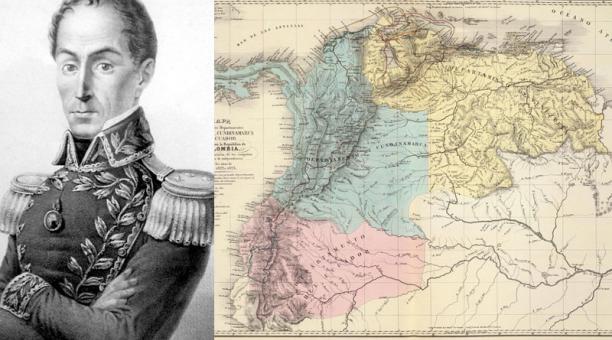 Simón Bolívar and some of the territories liberated by his army. (Archive)

The Caribbean country's history has been marked by more or less continuous struggles against foreign domination. Indigenous peoples in the region carried out long-lasting and effective resistance against the Spanish colonizers, whose rule was likewise repeatedly shaken by slave rebellions. Later, in the continental struggle against Spanish colonization that emerged in the early 19th century, Venezuela was also in the vanguard. Argentina’s José de San Martín (1778-1850) and Caracas-born Simón Bolívar (1783-1830) were the two most important leaders of South America’s independence wars. However, the latter stood out for his vision of continental unity and his pursuit of social emancipation.

Neither project was fully realized, leading to renewed struggles in the wake of independence and following Bolívar’s early death. For example, in the Federal Wars (1859-63), Ezequiel Zamora led peasant armies seeking to overthrow the stranglehold of the creole oligarchy. In the early 20th century, President Cipriano Castro’s assertion of national sovereignty led to the naval blockade of Venezuela by foreign powers (1902-03). In the latter part of the century, Venezuelan guerrillas (1963-75) fought to overthrow the US-aligned neocolonial regime, while the massive 1989 Caracazo insurrection and 4F 1992 civic-military uprising were instrumental in breaking the neoliberal status quo. 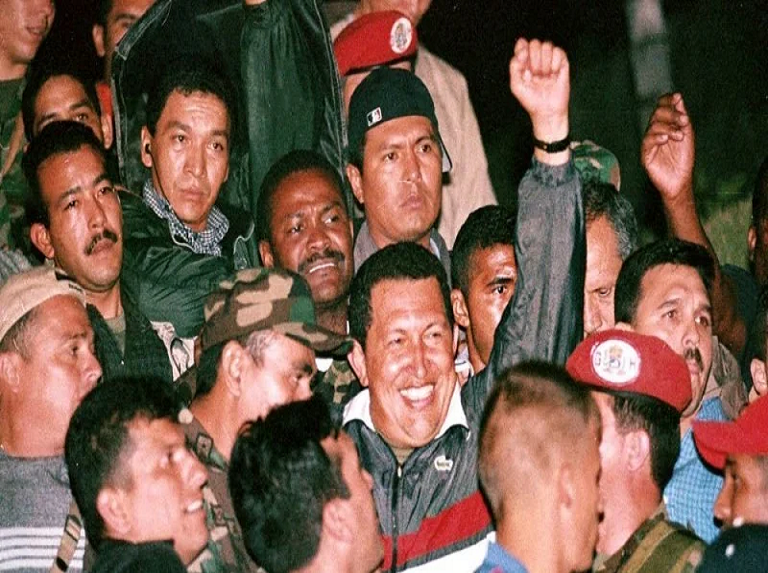 Hugo Chávez returns to Miraflores Palace on April 13, 2002, after the Venezuelan people reverted the coup. (Archive)

Venezuela’s recent history has been marked by the emergence of the Bolivarian Process or the Bolivarian Revolution, a period initiated by Chávez’s arrival to power via popular election in 1998. Committed to “refounding the Republic,” the late president rallied the people to do away with the Puntofijo Pact that, from 1958 through 1998, established a formally democratic system favoring the interests of the bourgeoisie and subordinated the country to Washington’s dictates.

The era of the Bolivarian Process – which formally began with the constituent assembly and the 1999 Constitution – took on an explicitly anti-imperialist character in 2004 and declared itself socialist two years later. 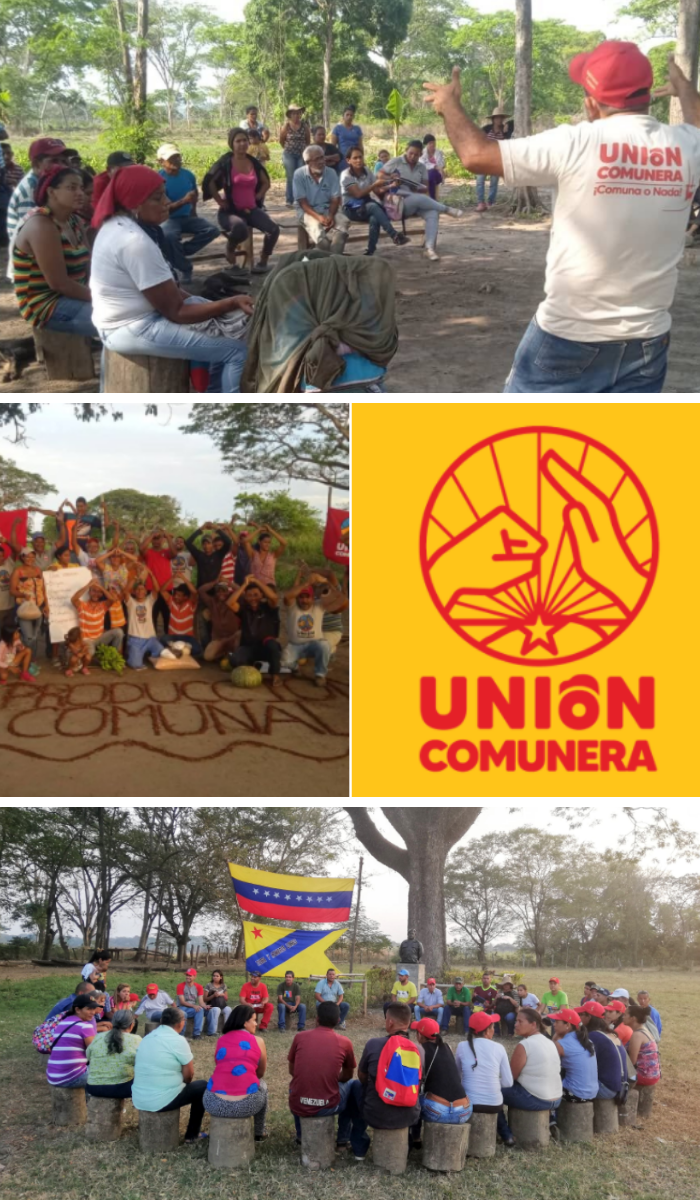 The communal project is alive and well in Venezuela. (Communard Union)

In 2009, Chávez proposed a political and economic reorganization of Venezuelan society: communes would become the basic building blocks, thereby initiating an extraordinary experiment to build popular power with social property and direct democracy in its epicenter.

The United States government has consistently opposed Venezuela’s assertion of sovereignty and its efforts to build an economy that favors the majority. Washington’s “regime change” policy made its public debut with the George W. Bush administration’s overt support for the 2002 coup against Chávez. Today, that policy inspires a series of criminal sanctions on Venezuela, inaugurated by former US Presidents Barack Obama and Donald Trump.

Nonetheless, the imperialist siege and the crisis haven’t kept the Venezuelan people from imagining and fighting for a better world. The commune remains at the core of the popular Chavista project, and against all odds, communards are demonstrating that it is not only possible but also necessary to advance towards a communal, socialist society. Chávez’s last political testament can be summarized in three of his own words, Commune or Nothing! and Venezuela’s grassroots are living up to his precept. 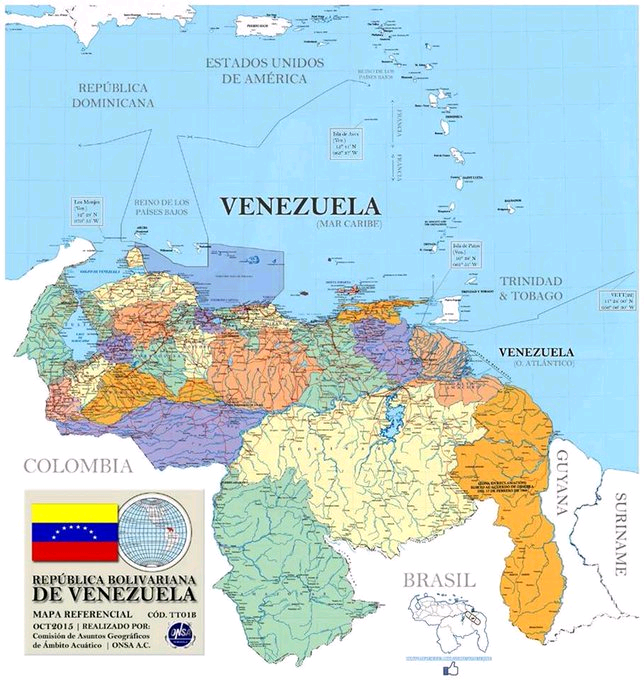 Map of the Bolivarian Republic of Venezuela.

Government type: Federal republic with a presidential system and five branches of government 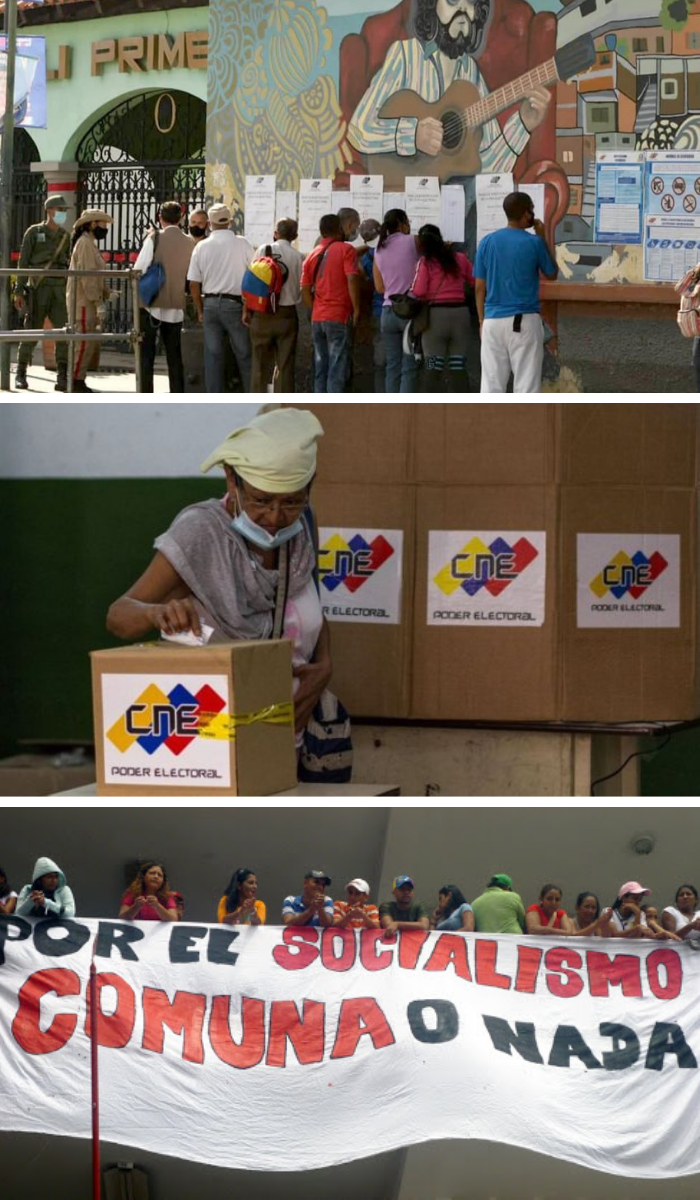 Venezuela’s current political system was inaugurated via referendum in 1999 when the people voted overwhelmingly in favor of a new constitution. This Magna Carta restructured the state, opened channels for democratic participation, and offered progressive rights to the population.

Venezuela has five government branches. The Executive Branch, held by the chief of state and head of government, is elected by popular vote for six-year terms. The Legislative Branch, known as the National Assembly, is unicameral, with 277 deputies elected by popular vote to serve five-year terms. The Judicial Branch’s highest instance is the Supreme Court, with magistrates appointed by the National Assembly for a single 12-year term.

Additionally, the 1999 constitution added an Electoral Branch and a Citizen Branch. The Electoral Branch – the National Electoral Council (CNE) – which administers all elections, has five principal members elected by the National Assembly for seven-year terms. The Citizen Branch ensures that citizens and government officials obey the law and consists of the Attorney General, Comptroller General, and Ombudsman.

As mandated in the 1999 constitution, Venezuela is a highly democratic country, with 27 electoral contests held between 1999 and 2020. However, it should be also highlighted that Venezuela’s democracy under the Bolivarian Process cannot be reduced to its elections, but also includes the radically democratic project embodied in the country’s communal councils and communes, where decisions are taken through direct democratic processes. 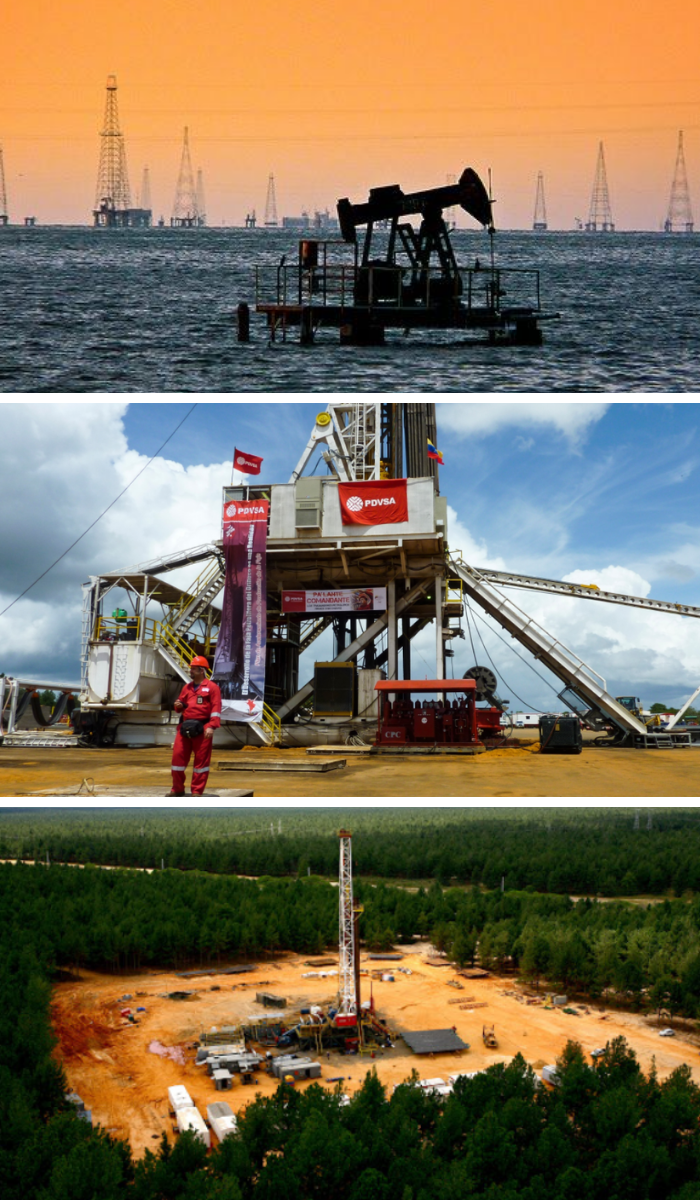 Venezuela has a dependent, market-based economy dominated by the oil sector, which accounts for 85 to 90% of its foreign currency income. The Caribbean nation has seen a 75% drop in its GDP since 2014, when the capitalist rentier model of accumulation entered into a severe crisis. Today it has a per capita GDP of US $2,457 (2020) and a minimum wage ranging from $2 to $10 per month.

Additionally, the US government has implemented economic sanctions against Venezuela since 2017 that have had a devastating impact on the population. Washington initially imposed financial sanctions and targeted state officials, and those were followed by an oil embargo in January 2019 and a blanket ban on all dealings with Caracas in August 2019. The unilateral measures have been responsible for the deaths of thousands of Venezuelans and have triggered an even more rapid fall in oil production, which was around three million barrels per day (bpd) at the time of Chávez’s death, and averaged 500,000 bpd in 2020. They have been widely condemned by a range of international bodies and personalities, including the United Nations.

During Chávez’s presidency (1998-2013) and up through 2015, Venezuela’s economy could be characterized as a mixed economy with some key sectors either controlled or supervised by the state. PDVSA, Venezuela’s oil corporation, was formally nationalized in 1976, but a neoliberal reform in the 90s led to an “Oil Opening” that was highly beneficial to transnational capital and left the country without control over its main resource. 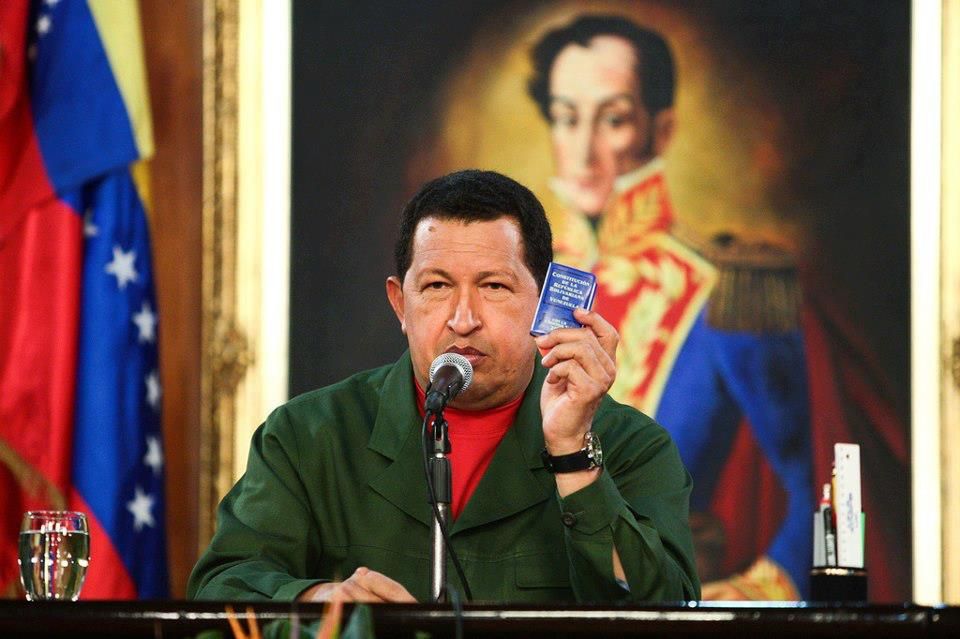 Venezuela’s current legislation favoring sovereign control of the oil sector includes the 1999 Constitution stating that all oil fields are state property, the 2001 Hydrocarbons Law, and a 2007 presidential decree stipulating that PDVSA must retain operational control of oilfields and hold at least 60% of the shares in joint ventures.

Other areas of the economy that were under state control or supervision with Hugo Chávez were services and foreign currency exchange (lifted between 2018 and 2019). The price of food and other basic goods, which remained mostly in private sector hands, were regulated through early 2017 when a process of liberalization of the economy began.

Additional important areas of Venezuela’s economy are gold and rare metals, exploited mostly in the Orinoco Mining Belt in Venezuela’s Amazon region. The agricultural sector is mostly directed at internal consumption, with processing and distribution largely held by a handful of conglomerates. 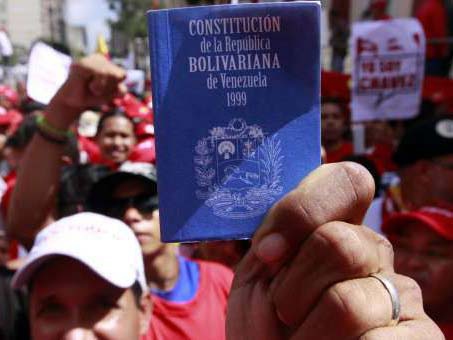 The Constitution of the Bolivarian Republic of Venezuela was drafted by a constituent assembly and adopted as the country’s Magna Carta in December 1999 through a popular referendum.

Venezuela’s Constitution defines the country’s democracy as “participative and protagonistic,” thus breaking with the narrow confines of liberal democracy. It establishes progressive rights such as free access to healthcare and additional rights for minority and indigenous peoples. The 1999 constitution also changed the country’s name from República de Venezuela (Republic of Venezuela) to República Bolivariana de Venezuela (Bolivarian Republic of Venezuela), in reference to the independence struggles led by Simón Bolívar.

Below is a translated version of the Constitution

Nov 25th 2022
Venezuelanalysis is almost 20 years old! To celebrate we want to share with you a neat infographic that explains our grassroots journalism and how you can...

Nov 23rd 2022
Campesinos called for “emergency measures” to ensure that they are not forced to sell crops at a loss.
END_OF_DOCUMENT_TOKEN_TO_BE_REPLACED