In the face of Venezuelan President Hugo Chávez’s ill health and subsequent death on March 5, the U.S. press—including its most unabashedly liberal wing—jumped at the opportunity to disparage him and his legacy, often on spurious grounds. Jon Lee Anderson of the urbane New Yorker magazine epitomized this tendency.

As the magazine’s corespondent for Venezuela and author of a January piece on the country that stretched to over 10,000 words, Anderson was the subject of withering ridicule. Jim Naureckas of Fairness and Accuracy in Reporting wrote that Anderson’s article appeared “almost like a parody of corporate media coverage of an official enemy state.” Economist Mark Weisbrot similarlynoted that Anderson wasn’t “letting commonly agreed-upon facts and numbers get in the way” of his plodding diatribe against Chávez’s failures. Those criticisms remain independent fromothers who have observedhisincreasinglybizarreTwitteroutburstsagainst critics. (He behaved in the same way in 2010, appearing in the comments section of an interview with Noam Chomsky, to incorrectly argue that I had misquoted him.)

Anderson’s article, “Slumlord: What Has Hugo Chávez Wrought in Venezuela?,” is indeed filled with blatant misrepresentations. The New Yorker’s vaunted factcheckers somehow permitted the publication of the following statement: “Chavez suggested to me that he had embraced the far left as a way of preventing a coup like the one that put him in office.” While it is true that in 1992, Chávez attempted a coup against an administration that had deployed security forces to massacre hundreds, perhaps thousands of civilian protesters, Anderson is misleading his readers. Chávez was “put in office” much later, in 1999, through a free and fair election—not a coup—a fact which he did not see fit to include in his piece. He instead wrote, vaguely, that Chávez “assumed” power in 1999.

In a Spanish-language interview with the BBC on March 9, Anderson also accused the deceased Venezuelan president of having been machista, or sexist, “but in a cultural sense. Women tended to be hosts at parties, for example, not political advisers.” If true, that would be news to Erika Farías, the recently departed head of the Office of the Presidency; Adina Bastidas, Chávez’s vice president from 2000-2002; Cilia Flores, currently the country’s attorney general; Gabriela del Mar Ramírez, currently public defender; Edmée Betancourt, head of the Ministry of Commerce; and scores of others. At present, women direct three of the five branches of the Venezuelan government.

Even more damning is the number of Anderson’s falsehoods exposed through simple arithmetic. For instance, in a NewYorker.com piece published before Venezuela’s elections, he wrote in error that “Venezuela leads Latin America in homicides.” The most recently available United Nations data show that Honduras, with 91.6 killings per 100,000 in 2011, has twice the rate of homicides as Venezuela, which recorded 45.1 in 2010. (El Salvador has 69.2.) When confronted with these facts on Twitter in February, Andersonadmitted his mistake publicly, addressing even his editors at The New Yorker, and agreed to offer a correction. Over a month later, however, neither Anderson nor his editors have fixed his invented claim.

In his NewYorker.com “postscript” for the death of Hugo Chávez on March 5, he published yet another factual inaccuracy, claiming that Venezuela “is the same Venezuela as ever: one of the world’s most oil-rich but socially unequal countries.” Impressively, in just 16 words, he managed to err on two counts: First, under Chávez, inequalitydid not stay “the same as ever,” but rather fell enormously. Publicly availableUN data confirm that Venezuela’s Gini index, a standard measure of inequality, fell from 49.8 to 39.7 between 1999 and 2011. Secondly, this decline made Venezuela anything but one of the world’s most socially unequal countries;according to the UN, it is now Latin America’s least unequal country. This reduction resulted from governmental priorities which halved poverty and unemployment over the past 10 years, while living standards improved through a healthy 2.5% annual per capita income growth since 2004. These massive reductions in poverty, which even many anti-Chávez editorials have noted, have never been reported by Anderson. Instead, hedeceptively points to “extremely high levels of poverty and unemployment” in order to stress “the magnitude of the mess that Venezuela finds itself in.” 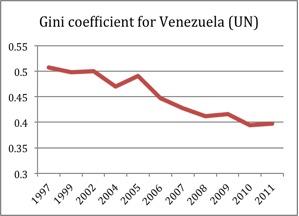 Finally, Anderson’s criticisms over Caracas’s slums suffer from flagrant omissions of chronology. He pinpointed the “height of [Caracas’s] allure” in 1983—it was a “boring, pristine, very North American” city, “buzzing along in modernity.” Yes, he admitted, there were “shacks on the hills, but not too many at the time.” “Now,” he says, “the slums are kind of everywhere.” It is “extraordinary” that “la revolución couldn’t tackle this” given that “the slums are still there 14 years later.” Anderson is performing sleight of hand with arithmetic here. He is excluding 16 disastrous years of economic history in which Chávez was never in office: from 1983 through 1998, real per capita income actually fell substantially, exacerbating poverty and housing insecurity to an unprecedented degree.

In a February panel discussion for the Frontline Club in London, he wondered “how to quantify the improvement in the standard of living in a city or in a place where people are still living in slums.” One way to do it is by looking at UN data, or other publicly available data on income, poverty, employment, and other social indicators that are heavily scrutinized and widely used by social scientists. Another way to do so is by acknowledging critics’ corrections to his false socioeconomic assertions, rather than referring to them on Twitter as “trolls” and “scum.” He should follow their advice, and complement his impressionistic firsthand reporting with empirical evidence.

[For those who would like to see The New Yorker take responsibility for factual errors in Anderson’s reporting, email [email protected], and tweet to @TNYnewsdeskand @jonleeanderson.]

Update (3-18): Thanks to readers’ actions, NewYorker.com has issued the following correction to Anderson’s October 7 web article: “*An earlier version of this post said that Venezuela led Latin America in homicides; globally, it was in fourth place, but third in Latin America (behind Honduras and El Salvador), according to U.N. statistics on intentional homicides for 2010-11.” Please also consider emailing the print magazine’s editors to ask for a retraction to the false statement that a coup “put [Chávez] in office.” Readers never learned from Anderson that Chávez was in fact democratically elected in 1998.

Keane Bhatt is an activist in Washington, D.C. He has worked in the United States and Latin America on a variety of campaigns related to community development and social justice. His analyses and opinions have appeared in a range of outlets, including NPR, The Nation, The St. Petersburg Times, and CNN En Español. He is the author of the NACLA blog “Manufacturing Contempt,” which critically analyzes the U.S. press and its portrayal of the hemisphere. Connect with him on Twitter: @KeaneBhatt

Apr 26th 2013
While one can applaud Jon Lee Anderson for finally acknowledging the value of social indicators and statistical data, he and his magazine cannot be allowed to...

Mar 12th 2013
On the occasion of Venezuelan President Hugo Chavez’s death, much of the international media responded in typical fashion, by painting the Chavez...

Jan 29th 2023
Besieged by imperialism, a remote commune projects a better future based on solidarity and the commons.
END_OF_DOCUMENT_TOKEN_TO_BE_REPLACED