Two weeks passed, and rubbish began to pile up in rather large mountains on every block corner. The heavy rains and dogs ripped open the plastic bags, their guts spilling out and spreading about on the footpath and road. It stank, there were rats and African snails, the vultures that usually hang out high up in the mountains were coming down into the city streets. Communities started reporting health problems, with the environment minister Alejandro Hitcher reporting a significant increase of diarrhoea, respiratory infections, and dengue. The river that runs through the city was visibly much more contaminated. 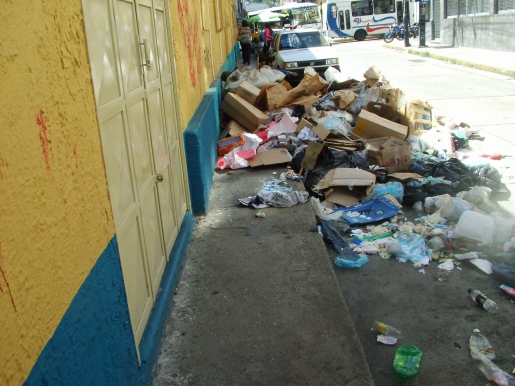 A street in Merida (Tamara Pearson/Venezuelanalysis.com)

In desperation, communities started to organise- they hired standard trucks between them and collected the rubbish themselves, swept the streets, and sometimes used venom to kill insect populations. Others burnt the rubbish. But it was an unsustainable solution, not just environmentally, but financially, for at 500bs for truck hire and 250bs to pay to dump the rubbish, divided by perhaps 20 families, three times a week- it was also unaffordable.

Lester Rodriguez, the opposition mayor of Libertador municipality (the central area of Merida city) is a kind of real life version of Lex Luther. A member of the Copei party, he was rector of the University of Los Andes (ULA), before being elected mayor in 2008 and will now run for governor of Merida state in December. As mayor he has spent millions of bolivars uprooting perfectly fine pavement near where I live, then repaving and painting those footpaths, no doubt as a “favour” to some friend of his in construction. He spends tonnes of money on the yearly bullfights in Merida, that the vast majority of locals are against, then smiles pastily at the cameras, and leaves rubbish uncollected for weeks in the poorer barrios of the city. As rector of the ULA it is known he helped hoard weaponry there (as an autonomous university, the police can’t enter it) for the violent and destabilising opposition group, M13. At this pertinent political time, he is currently taking a long holiday in Europe.

In 2009 Rodriguez received Bs 56 million specifically for rubbish collection, then at the start of this year he received a further Bs 12 million. It’s hard to know where that money has gone, but the municipal council (responsible for dealing out money to the mayoralty from the national government) has refused his latest request for further money for rubbish collection, given his complete lack of transparency, not fulfilling basic legal requirements in the request, and concern that they money will instead be directed to the opposition’s current presidential campaign, and Rodriguez’s campaign in December.

In public, Rodriguez has blamed the state owned national electricity company, Corpoelec, because of money owned by it to the mayoralty. Yet the money owed is a small amount, and Rodriguez owes a similar amount to them. The Corpoelec offices are one block from where I live, and a number of times men in balaclavas have dumped truckloads of rubbish on its doorsteps. Most recently, a neighbour who lives across the road from the offices, came out to complain, and was beaten up. He spent the night in hospital after a minor eye operation.

Nevertheless, it turns out this situation has become the crisis, or catalyst, we needed to start taking real action to democratise rubbish – an issue that is at the heart of how we consume and how we relate to our own resources and the planet.

The issue has also revealed some troubling and inspiring power dynamics between the grassroots, the opposition, and the national government that extend beyond little Merida, and can apply generally to the revolution.

Ultimately, it wasn’t the United Socialist Party of Venezuela (PSUV) who got the ball rolling. A few environmental activists put the call out for a protest outside the mayoralty on Facebook. Hundreds quickly committed to attend. My communal council called an emergency meeting, and there we decided to support the protest, but we suggested to the organisers that it be a march from the plaza, and they agreed.

That Friday we held an organising meeting for the protest, and around 100 people from various communal councils and movements turned up. People were excited, and rather than talking about the protest, made proposals for a recycled art and graffiti movement, recycling schemes, and to create an EPS directa – a social production company run by the communal councils to collect and recycle rubbish, rehiring the current rubbish collectors who are out of work because of the mayor’s irresponsibility. I also got up and made some more concrete proposals for the march the next day, including that we demand that the mayor resign. People were excited, and clapped loudly.

The meeting ended in frustration though, as the PSUV prefect and one of his employees said they were “against the march” because the organising of it hadn’t gone through PSUV channels. This is despite the fact that almost everyone there was a PSUV member and/or leader. The prefect proposed the march be the following Thursday, rather than the next day (a Saturday), which I saw as a deliberate attempt to create confusion and disperse the enthusiasm. One of the main strategic lines of the PSUV is to support grassroots organising, but as the PSUV Merida executive hadn’t done anything so far, I guess they resented others taking the initiative.

Few of the people who came to that meeting came to the protest on Saturday. Instead of marching, we drew placards in the street, concentrated in one corner, and chanting “no more rubbish!” wrote the that same slogan on the back of cars with shoe polish (a Merida tradition). Despite the small turn out, it was a lively protest, and the municipal council called a press conference meeting for the following Monday. 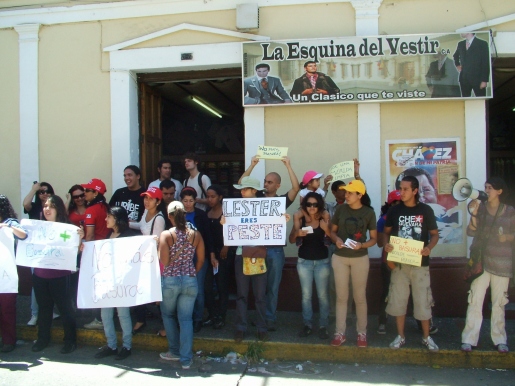 The Federal Government Council (CFG), the entity where the national government articulates with communal councils and communes and assigns funding distribution, called a meeting of Libertador communal councils.  The vice-minister for the environment was meant to attend this meeting, but didn’t. However, some 80 communal councils were represented. The Merida representative of the CFG echoed our original proposal to form an EPS, and said the municipal council was prepared to fund it with the money that the mayor was asking for.

Unfortunately, the next day the environment minister went on television and stated that after consulting with the “popular power” (the grassroots), the national government would take emergency measures to collect the rubbish. He had not actually consulted with us, and this was not the solution we were proposing.

Further, his emergency plan- currently being implemented, was a necessary, but short term solution to the crisis. Together with the tourism institute Cormetur, the (Chavista) Merida state government, and a brigade of volunteers, a contingency plan was designed to collect (but not recycle) the rubbish. The national government also created a municipal institute to rehire the rubbish collectors. The plan is only to be implemented until just after the presidential elections on 7 October, which says to us that in fact the environment ministry is more concerned with votes than with public health and the environment. We have written to the minister asking that the contingency plan last until we can get the EPS up and running, and criticising his lack of consultation and speaking in our name. 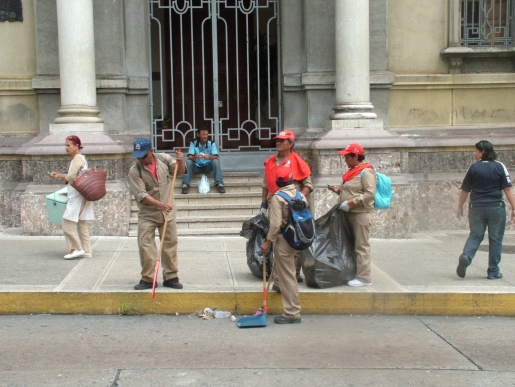 National government workers cleaning up and doing what is the mayor's responsibility (Tamara Pearson/Venezuelanalysis.com)

I am excited and inspired by the idea of creating an EPS. This is revolution! This is the people taking power and responsibility into their own hands. We don’t need the lazy, corrupt and greedy mayors, nor the prefects. Eventually, all services should be run through the communities and by the workers. In Merida, the gas in some parroquias (suburbs) is already managed by an EPS.

Currently, Merida’s rubbish is contracted to Spanish company Urbaser. As a private company, it has neglected worker rights and is not actually concerned for the environment. The rubbish trucks are property of Urbaser, not of the population.

An EPS would be the opposite of that. In the following meetings of the mesa tecncia (the technical working group) to form the EPS we discussed the need for land to set up large scale worm farms, the need for local community worm farms and composters, as well as sorted rubbish collection points, the relationship between workers and community, awareness raising, countering consumerism, encouraging companies to produce and package in ways that are easier to recycle (or reducing packaging altogether), working with schools, training, and the administrative, operative, and legal aspects. We would like to use the recycled products to produce housing materials for the housing mission, among other things. After all, as one person said at one of the meetings, “rubbish is a treasure”.

We decided to form 7 EPSs in 7 different regions of the municipality, which would then coordinate together. The first steps will be holding broad community assemblies and discussing the EPS, as well as electing one representative to it per communal council. 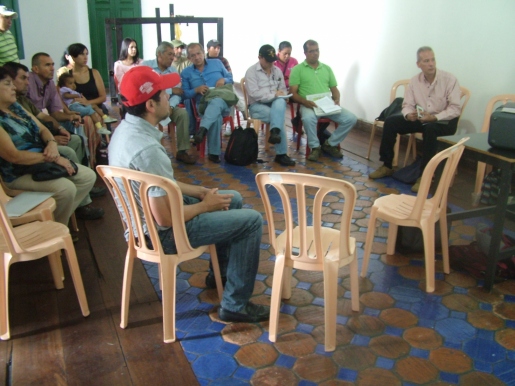 One of the meetings of the mesa tecnica to create the EPS (Tamara Pearson/ Venezuelanalysis.com)

Also, according to the Integral Waste Management Law, article 82, competency for waste management can be transferred to popular power if it can prove its capacity to do the job. This means we will have to document all the compost and worm farms that already exist, the one recycling initiative in the botanical gardens, and the way communities have already worked together to collect their rubbish, among other things.

We are also going to study the example of Petare (see photo to the right), which now also has community based rubbish collection (though no recycling), following a similar crisis there. Inhabitants of Petare denounced that the opposition mayor Carlos Oscariz only collected rubbish in the streets of the commercial centres and the middle class apartment buildings, and not the poor areas. He, and the governor of the area at the time; current opposition candidate to the presidential elections, Henrique Capriles, were focusing their time and resources on campaigning, and the streets were full of rubbish.

Chavez’s proposed government plan for the next period, should he win the October election, includes a new section dedicated to the environment.  So far, this has not been an environmental revolution. Consumerism hasn’t been tackled, public transport infrastructure has been constructed but car production has also increased. Over the last year the government has encouraged and supported urban agriculture across the country, which is a great complement to composting and worm farming, and community organisation of environmental sustainability. It also inaugurated the Kariña Socialist Oil Pipe Recuperation Factory in 2010, to recycle oil pipes into metal framing for construction, and also make bricks partially from recycled paper. Such initiatives make sense for their sustainability and their affordableness. The fifth section of Chavez’s plan then, provides the basis for a change in direction in Venezuela's state based and grassroots environmentalism, and we hope here in Merida that our EPS can be an example, or a pilot project for something more national.

Sep 29th 2013
This study offers an account of the dynamic relationship between the popular sectors (poder popular) and the public or state sector (poder público) in the...

Aug 31st 2010
On Saturday, Venezuela opened a state-owned factory to recycle used oil pipes into metal framing for construction, and announced it will invest in the...

Oct 20th 2021
The effort to return to in-person instruction comes as the country ramps up its COVID-19 vaccination campaign.

Oct 13th 2021
UN Ambassador Samuel Moncada argued that US policy toward Venezuela had remained unchanged under the Biden administration.
END_OF_DOCUMENT_TOKEN_TO_BE_REPLACED