The average of all 13 polls carried out in August and in the first week of September, saw Hugo Chávez on 51% and Henrique Capriles on 35% giving Chávez an average lead of 16% (See table 1).

Such a lead would translate into an advantage of more than two million votes for Hugo Chávez on October 7th.

Of these 13 polls surveyed, 11 gave a lead for Hugo Chávez and just two put the main challenger, Henry Capriles Radonski, ahead. (See chart 1 to the right).

In the 11 polls putting Hugo Chávez ahead, all but one gives him a lead of between 13-28%. In contrast, the two polls that put Henry Capriles Radonski ahead gave him leads of just 2% and 4%.

There is also little evidence to support the claims by the opposition that ‘undecided voters’ could still determine the situation. In the 11 polls where Hugo Chávez is ahead, seven of these give him a lead that is greater than or equal to the number of undecided voters. This means that even in the extremely unlikely scenario that all the undecided voters went to vote and backed Capriles then Hugo Chávez would still win.

Of the four remaining polls, three (two by Datanalisis and one by Hinterlaces) show that Capriles would need to secure the backing of more than 60% of all undecided voters, assuming they all went out to vote. As this won’t be the case and there will be some level of abstention, Capriles would need to win over an even higher proportion of undecided voters. The evidence does not show that this is happening with undecided voters. The president of Hinterlaces says that around half of undecided voters will not vote and the other half are splitting evenly between the two main candidates. Datanalisis shows that of those who have not yet decided who to vote for, more prefer Chávez (7.2%) to Capriles (3.2 %). 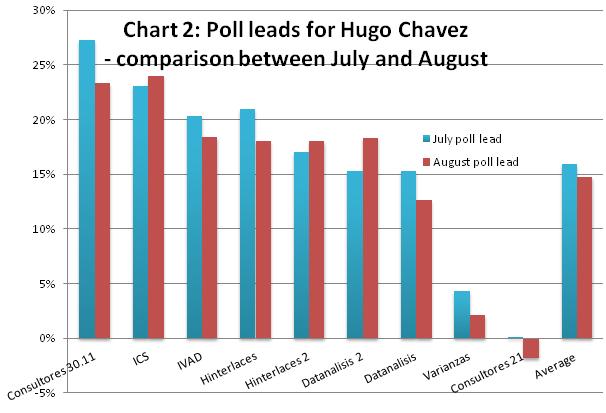 Nor does the recent spin from Henrique Capriles’ campaign team claiming that the polls are narrowing give a true picture. Comparing those pollsters that undertook polls published in both July and August, there is no uniform pattern of the lead narrowing (Chart 2). More importantly, even where there has been a slight narrowing - which on average was by just 1% - this is insignificant given Hugo Chávez’s huge lead.

Lee Brown who carried out the survey for the Venezuela Solidarity Campaign, said:

“Hugo Chávez clearly has a convincing lead according to the overwhelming majority of pollsters.

The evidence from looking at the full range of polls, rather than cherry picking, does not back up the claims of the campaign of Henrique Capriles Radonski that the race is close or that Capriles is ahead.

Nor is there any evidence that Capriles is making any real inroads into Chávez’s lead as they’ve also claimed.

Hopefully these statements from the right-wing opposition are just the kind of things that get said in the cut and thrust of a campaign.

But the bigger worry is that it’s part of an orchestrated claim by the opposition to give the impression of an impending victory and then to claim fraud on 7 October should they lose, as the polls suggest is very likely.”

1)      The VSC analysis was based on the following poll results published in August and the first week of September, exactly one month before the election.

2)      Where a company undertakes more than one poll in a month, any comparison is with the equivalent poll of the previous month.

Sep 24th 2012
Venezuelan President Hugo Chavez is the 4th most popular president in the Americas, according to a new study of presidential approval ratings in the region.

Aug 13th 2012
This study by the VSC UK offers an overview of the results of polls by a broad range of polling companies in Venezuela so far in the country's...

Apr 3rd 2012
According to Latin American polling companies such as Datanalisis and Consultores 21, this year’s presidential elections in Venezuela will be a close-knit...

Apr 4th 2011
According to the latest GIS XXI survey, Venezuelan president Hugo Chavez has a support level of 51%, and there are low levels of support for the performance of...

Jan 24th 2023
Chris Gilbert and Cira Pascual Marquina look at the Venezuelan communes as a key force in an extended process of national liberation and social...
END_OF_DOCUMENT_TOKEN_TO_BE_REPLACED