So, I’ve decided there’s a new kind of rage; along the lines of car rage, or mosquito rage (inadequately swearing at that unlocateable and constant buzz somewhere in the vicinity of your head) and I’ve dubbed it ‘mainstream media rage’.  It’s a product of reading, every morning, the Google alert list of English articles published about Venezuela, where so called reputed media conglomerates like Reuters publish pure and direct lies and distortions about the country I live in, with complete impunity.

This morning I came across this article from Policymic; Hugo Chavez Wages War on Free Press in Venezuela, Other Latin Presidents Follow Suit. A charming piece of investigative and meticulous journalism. Or not. More like a knee-jerk reaction, McCarthy style, ‘anything that is left wing is bad and we’ll make up the rest’ type article, something that is all too common in the era of syndicated, factory made journalism.

The Policymic article literally invents the fact that, “Hugo Chavez, in Venezuela, has closed down hundreds of radio and television stations and newspapers... Newspapers have been threatened and fiscally harassed by the Chavez regime”. It’s the sort of stuff that’s hard to respond to, because like people saying ‘Obama cares about Afghanis’ all you feel like you can really say is, ‘no you are wrong, that isn’t true, that’s a lie’. And they say it isn’t, and you’re stuck, fuming, ears red with an attack of media rage and the impotence that goes with it, because unlike in Venezuela, most of the rest of the world does not have media ethics laws, and certainly doesn’t apply them. Only rich individuals who can afford lawyers and are individually attacked by the press have a vague chance of holding that press accountable for defamation. As for its manipulation, its convenient blindness, its chronic long term memory loss, its defiance of context, its love of sensationalism, violence, and the objectified female body, its racism and its Eurocentralism, well we are powerless.

So it’s no surprise when such private press companies (for they are just that, companies as much as McDonalds and Nike... people sometimes forget it, thinking the mainstream press operates for reasons other than for money making) call the fining of private Venezuelan television station Globovision for manipulation, under Venezuela’s Law of Social Responsibility in Radio and Television “repression of free speech”. They redefine free speech to mean that business is free to lie and the people shouldn’t criticise that, and they definitely don’t have the right to run their own, profit free, democratic media. We all know that under capitalism, “freedom” is freedom for the rich and for capital, not for people. Thankfully, here in Venezuela we’re doing something to change that around.

Every day, every week, the private press war on Venezuela goes something like this: 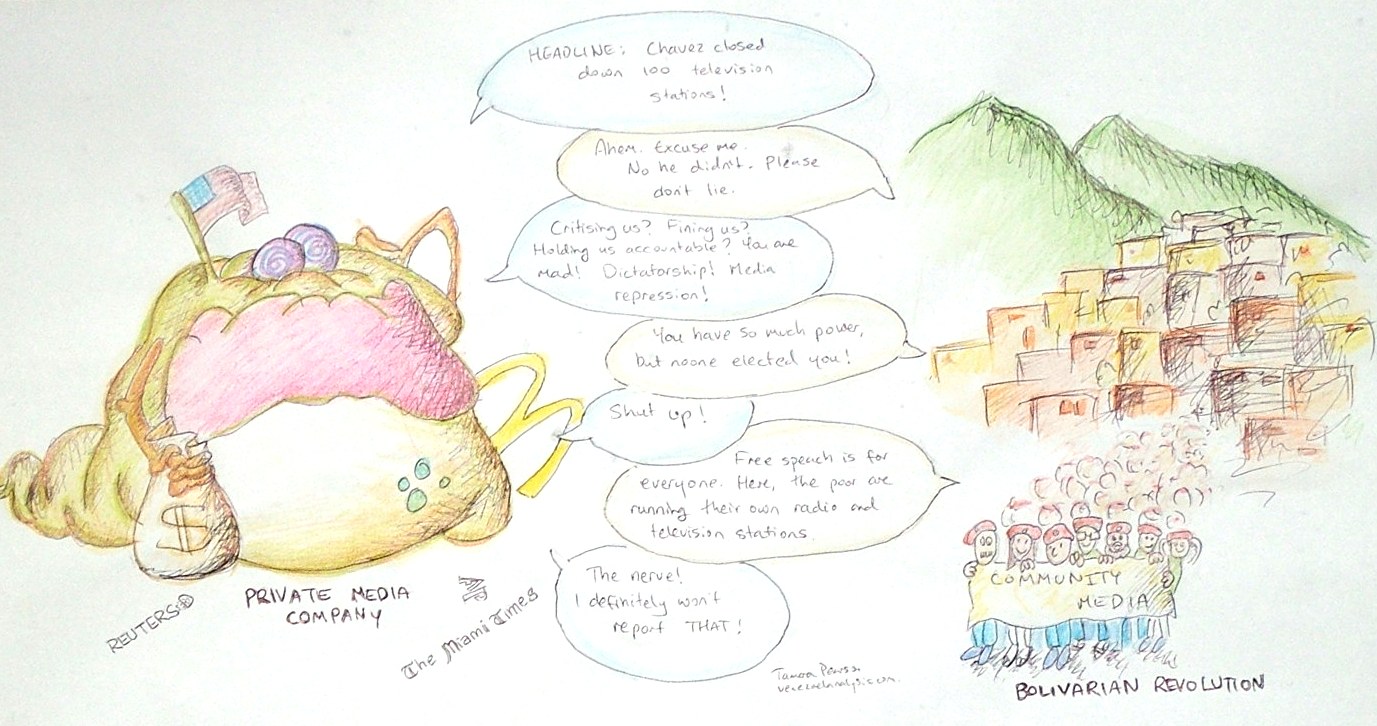 Dec 4th 2010
Mérida, December 3rd 2010 (Venezuelanalysis.com) – As the year draws to a close, Venezuelanalysis.com (VA) has launched its fund drive to raise money to...
Jun 6th 2008
Reports keep surfacing about new threats against Hugo Chavez. Given past ones, they can't be taken lightly. Chavez is alerted and reacts accordingly. Case in...
Jan 10th 2008