Last night, Venezuela's VTV reported from CAVIM (Venezuelan Military Industries) in Maracay, on their production of the AK-103 and a full range of ammunition for use by the new National Police Force and the Venezuelan Military. The AK-103 is a modern, Russian-designed assault rifle, chambered for the 7.62×39mm M43 round. It uses plastics wherever possible to replace metal or wooden components to reduce overall weight. The VTV report showed the AK-103 fitted with a variety of sights, including laser, night vision, and telescopic sights, plus a suppressor and the GP-25 grenade launcher. CAVIM has already manufactured 3,000 AK-103's using technology transferred from Russia.

The AK-103 now being manufactured in Venezuela by Venezuelans at CAVIN using technology transferred from Russia. (Stock Photo)

In his book, Open Veins of Latin America, Eduardo Galeano described the history of the US and European exploitation of Latin American resources and labor. Among the themes in his book, he showed how the invader/colonizer extracted natural resources, shipped them to their own countries, produced goods from them and then sold them back to the countries they had robbed. An important part of this robbery was their refusal to share the design and production technology with countries where they had extracted petroleum, gas and minerals, grown sugar, vegetables and fruit, grabbed agricultural land and economically subjugated the population.

Before the advent of the Bolivarian Revolution under President Chavez, Venezuela has always been dependent on foreign countries for almost everything - from food to arms. Its dependence on arms was dramatically revealed when the U.S. refused to sell Venezuela replacement parts for the F-16 fighter jets, purchased under the 4th Republic before President Chavez came into office. Over the last decade, the Chavez administration has gradually led the country to new levels of independence. 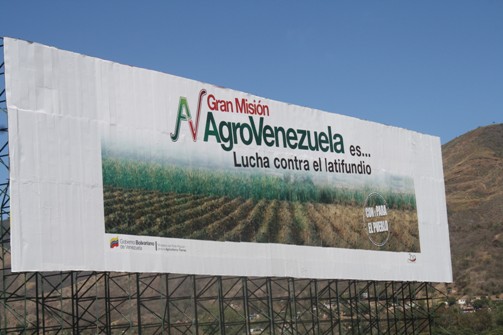 Billboards like this one along the autopista at La Victoria, Aragua, announce the successful march toward food sovereignty in Venezuela.
(Axis of Logic Photo) 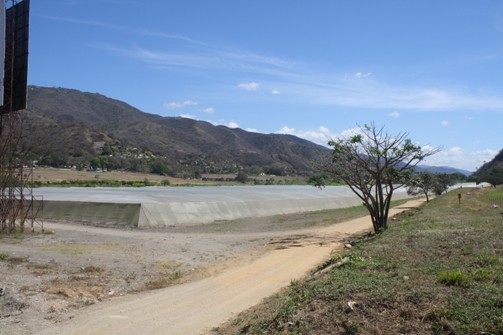 There are 11 of these magnificent "Maya Sombras" in only one location at Sabaneta in the State of Aragua. These massive greenhouses are also producing vegetables in many other locations throughout the country.  (Axis of Logic Photo) 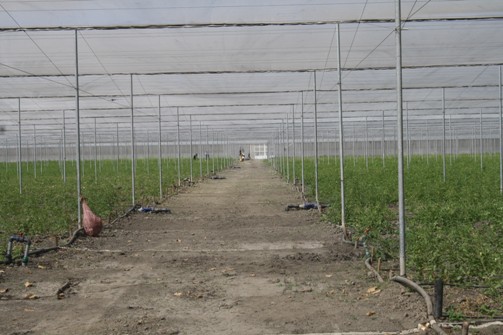 We took this photograph of the inside of a Maya Sombra in March, 2012. These new plants are now producing tons of quality tomatoes sold in the markets at very low prices. If you look to the far end of this structure, you will see a door that leads into another greenhouse identical to this one and 9 more after that. (Axis of Logic Photo) 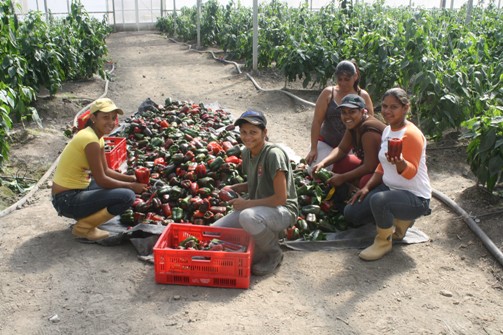 We interviewed these 5 women at 7:30 a.m. They proudly showed the pimenton they picked in the first half hour of the day in this Maya Sombra in Sabaneta. They told me that they collect the peppers at this rate all day long, 6 days a week. Hundreds of tons of vegetables are hauled out of Mision Agro-Venezuela locations like this one throughout the day for distribution in the markets across the country. The opposition constantly spreads rumors that these Maya Sombra's are a waste of money with only "monte" (weeds) growing inside. When President Chavez nationalized land from the big sugar cane plantations the opposition claimed that vegetables could not be grown in soil where only sugar cane had been grown for hundreds of years.  (Axis of Logic Photo) 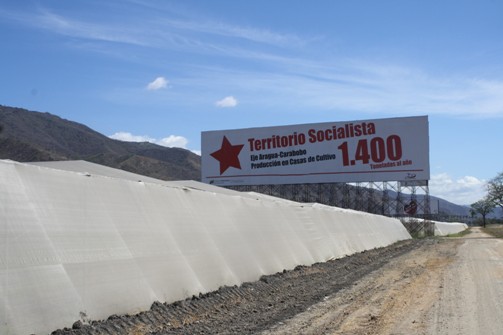 Mission Vivienda has handed over 213,000 new dwellings to the less fortunate in Venezuela who pay just 10% of the value over 20 years.  A further 400,000 are currently under construction in this long term plan to pay off the social and human debt to the population by 2018/2019 which started more than 500 years ago with Spanish colonization and in the last 50 years followed by capitalist neoliberal exploitation. If the governments of the U.S. and Europe had the political will and morality, they could be doing this for families who have been losing their homes by the millions to bank foreclosures, disabled or unemployed and unable to pay their monthly mortgages. 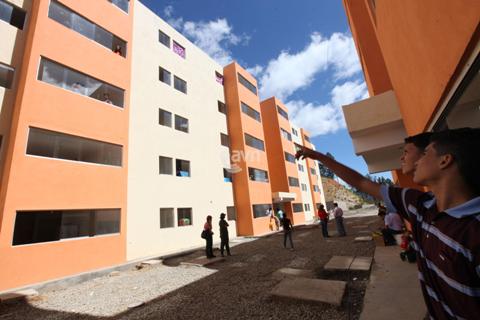 These modern homes built in Maracay are one small example of the hundreds of thousands of homes being built by Mision Vivienda.
(MINCI Photo) 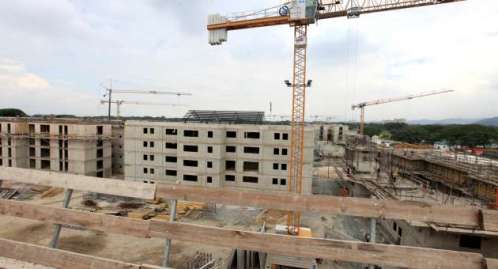 ﻿﻿213,000 new dwellings are now inhabited by people formerly living in sub-standard housing and 400,000 more are currently under construction. This Mision Vivienda site is located in the State of Aragua, just one example of the many construction sites across the country. (MINCI Photo)

Subsequent to tonight's report by military commanders at CAVIM, President Chavez emphasized the importance of also gaining independence from foreign countries for its national defense system.

An important component of the national defense system is surveillance and tonight's report featured the first of 3 surveillance drones built entirely in Venezuela by Venezuelan engineers who were trained in Iran. In December, 2011, Iran used technology to capture and bring down the RQ-170, a US stealth drone and the most sophisticated the US has developed to date.

A photo of one of the 3 surveillance drones now being manufactured entirely in Venezuela by Venezuelan engineers who were trained in Iran. (MINCI Photo)

The RQ-170 has the capability of sending back real-time streaming video. The one captured was deep inside Iran spying on Iran's military and nuclear energy sites. Following the capture, Russia and China appealed to Iran, expressing their interest in obtaining the related technology learned by Iranian engineers. How much the Iranians shared with the two countries is unknown, but it appears that Venezuela has been a recipient of this prized technology - enough so to be able to now build their own surveillance drones. This is super-tech guerilla warfare at its best - and without a shred of violence. The stupidity of unilateral war on foreign countries is eclipsed by the brilliant engineering and cooperation between Venezuela and Iran.

The Venezuelan drone has a wing span of 4 meters, can fly for 90 minutes at a maximum altitude of 12,000 feet. Its applications range from oil field surveillance, frontier reconnaissance and are capable of taking still surveillance photos and feedback live streaming video to the authorities. The drone is unarmed and is to be deployed for defensive purposes unlike the predatory drones of the US which are regularly bombing and killing innocent civilians in Pakistan and Yemen.

Many people throughout the world despair during this period of history as they see the apparent triumph of an evil empire bringing all nations and inhabitants of the world under its heel of oppression. Despair not. Things are not always the way they appear to be.

Apr 27th 2012
41,863 houses have been built so far this year as part of the Venezuelan government’s mass house construction program, equating to 21% of the 2012 aim of 200,...
Oct 24th 2011
Since Venezuela nationalized the agricultural supplies giant Agroisleña and turned it into the state-owned Agropatria one year ago, the number of farmers...