So, as I walked down to the newspaper stand in Parque Central in Caracas I had visions of newspapers with blanked out front pages, as was usually the case during the IV Republic. However, what I found was very different. The front pages of most of the papers (El Universal, El Nacional, El Nuevo País, 2001, El Mundo, Reporte Diario de la Economía, La Razón, etc) were extremely critical of the decision of the national assembly to pass an Enabling Act giving Chavez emergency powers. In fact, "critical" is too soft a word to describe their reaction. Many of them were hysterically denouncing the move as dictatorial.

But, the one front page that really caught my attention was TalCual's. The daily opposition paper, edited by former leftist turned rabid reactionary Teodoro Petkoff, had a headline boldly proclaiming "Going towards a dictatorship" and a caricature of Chavez giving a Nazi-style salute. 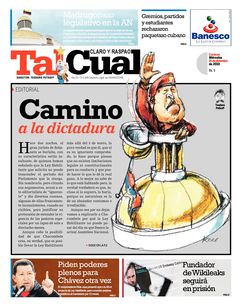 In any democratic country such a provocation would probably lead to legal action against the editor. Not in Venezuela. The editorial, written by Petkoff himself, calls the democratically elected president "ignorant" and "ignoramus" and uses extremely derogatory nicknames of his own making to refer to him.

The concluding paragraph compares Chavez with Hitler: "This is what Adolf Hitler did. On March 24, 1933, the Reichstag, the German Parliament, gave him special powers for indefinite time and to legislate over any issue. The Reichstag never met again; from then on Hitler ruled in a dictatorial manner. With this violation of the constitution ..." The fact that granting the president enabling powers is within the constitution seems irrelevant to Petkoff.

One wonders how is he allowed to publish such libellous material. It is not even the first time he makes the allegation that Chavez is Hitler reincarnate. On Februray 1, 2007 Petkoff published a "Heil Hugo" front page with a picture of Chaplin as Hitler. 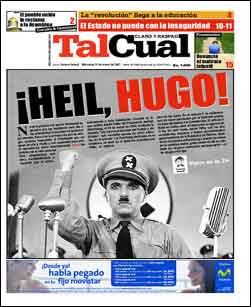 The same newspaper, on September 26th, 2003, published a front page picture showing Hugo Chavez holding a 9 mm handgun at a public rally with a headline saying "At gun point". The small problem was that what Chavez was really holding at that public rally was ... a rose, and the picture was in fact a photo-montage. 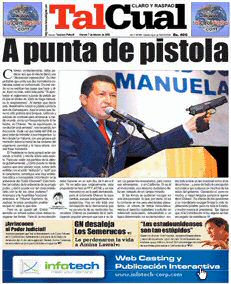 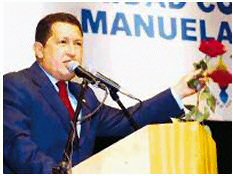 Despite all the protests of Petkoff and the rest of the reactionary media, nationally and internationally, about the so-called dictatorial Chavez, elections and referenda are held very often in Venezuela, and the people have once and again given support to the Bolivarian revolution, in the ballot box and in the streets, defending it against the coup plots of the "democratic" opposition represented by Petkoff.

Teodoro Petkoff, who was once a leftist, joined the Caldera government in the 1990s, where he was in charge of the privatisation of most state owned companies, following the diktats of the IMF. He supported the April 2002 coup against president Chavez and published a famous editorial entitled "Chao Hugo" celebrating his undemocratic removal. He is one of the main leaders of the opposition and acted as the main advisor to the opposition presidential candidate Manuel Rosales in the December 2006 elections.

Petkoff concludes his editorial with this statement: "Chavez has started to walk, now for real, the path to a dictatorship. Will the country swallow it?" This sounds like a very ominous threat, particularly coming from someone who supported the coup in April 2002 and has played a role in every single undemocratic plot of the reactionary opposition to remove Chavez and put an end to the Bolivarian revolution.

After buying a copy of TalCual, which will come very handy next time someone raises the issue of the so-called of "freedom of expression" in Venezuela, I walked away with a feeling of anger and rage at the fact that most of those who organised and participated in the coup in 2002 are still free to attack the Venezuelan revolution in the media, through economic sabotage, by leading the opposition parties and in conspiracies and plots with US imperialism.

The problem in Venezuela, clearly, is not one of lack of freedom of expression, but one of incredible and dangerous leniency with the sworn enemies of the democratic will of the people.

Nov 1st 2018
Petkoff was an “iconoclastic and anachronistic figure” who “shifted steadily to the right,” according to George Ciccariello-Maher.

Jan 24th 2023
Chris Gilbert and Cira Pascual Marquina look at the Venezuelan communes as a key force in an extended process of national liberation and social...

Jan 22nd 2023
Under siege by imperialism, a remote commune projects a better future based on solidarity and the commons.
END_OF_DOCUMENT_TOKEN_TO_BE_REPLACED