As part of their rebuttal clearly proving that Rohter is the one peddling misinformation, Stone and the film’s screenwriters Tariq Ali and Mark Weisbrot detect a conflict of interest in the fact that the The New York Times review has been penned by the same author who wrote the following analysis after the 2002 coup d’état against Chávez:

“Neither the overthrow of Mr. Chavez, a former army colonel, nor of [Ecuadorian President] Mr. [Jamil] Mahuad two years ago can be classified as a conventional Latin American military coup. The armed forces did not actually take power on Thursday. It was the ousted president’s supporters who appear to have been responsible for deaths that numbered barely 12 rather than hundreds or thousands, and political rights and guarantees were restored rather than suspended.”

Further support for the concept of the nonmilitary-coup-nonetheless-conducted-by-the-military was provided by the U.S. State Department in the aftermath of the 2009 coup in Honduras and generated a lot of official stuttering during press briefings dedicated to conceptual explanation. Rohter appears to have limited his questioning of vocabulary accuracy in the Honduran context to a 1996 article in which he adds quotation marks to the term “sweatshops”; the appearance elsewhere on the Internet of a slightly different version of Rohter’s Venezuelan coup analysis cited above—with differences including the elimination of the term “Mr.” and the substitution of the words “a dozen” for “12”—meanwhile indicates that Rohter may now have even more ammunition with which to oppose the documentary’s factual basis.

Not clear, of course, is how the term “barely” factors into casualty counts, and whether Rohter’s twelfth casualty only died after being suckered in by pro-Chávez propaganda. Also not clear is why it is necessary to minimize deaths if you are blaming them on the enemy anyway, or why other mainstream news outlets reported that “[m]ore than 100 people died in events before and after the coup”, in addition to excluding the word “barely” from headlines like “Venezuela coup linked to Bush team.”

“Barely” is also excluded from the February 2009 The New York Times report on the Venezuelan referendum on abolishing term limits for public officials, which categorized Chávez as “decisively” winning despite Rohter’s 2002 decree that Chávez’ failure “to find a way to deliver the prosperity and higher living standards that he had promised… ultimately assured [his] downfall.” Commitment to prosperity and higher living standards was further called into question last year by the elderly Venezuelan street sweeper who refused to sell me her Chávez baseball cap.

Below are several of Amelia Opalinska’s photographs of our visit to Venezuela. Taken the day before the referendum, they feature barely a dozen Venezuelans oblivious to Chávez’ downfall. 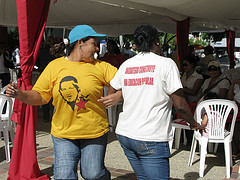 Jun 29th 2010
A critical look at the New York Times treatment of Stone's film South of the Border and the in-built ideological bias of the Times' coverage of Latin...
Jun 29th 2010
Not only are there the numerous errors that Oliver Stone, Tariq Ali, and Mark Weisbrot point out in their letter to the New York Times, here are a few more...
Jun 28th 2010
Larry Rohter attacks our film, “South of the Border,” for “mistakes, misstatements and missing details.”  But a close examination of the details...
Jun 28th 2010
Oliver Stone's new documentary about Latin America's leftward political shift and its growing independence from Washington is being lambasted by the media...

Jan 28th 2022
Chávez’s agriculture minister talks about the revolutionary changes in land tenure that took place under the former president.

Jan 27th 2022
The electoral authority has declared the request for a recall referendum against President Maduro “inadmissible” after a 1.01 percent turnout.

Jan 26th 2022
Vice-President Delcy Rodríguez warned that there was a “hidden agenda” aimed at justifying an intervention in the South American country.

Jan 25th 2022
VA columnist Ociel López looks at some of the consequences of the opposition victory in the Chavista stronghold earlier this month.

Jan 24th 2022
The opposition politician rejected the accusations, called for street protests, and blasted efforts to “kill off” the recall referendum.
END_OF_DOCUMENT_TOKEN_TO_BE_REPLACED