No to bureaucratic sabotage against Inveval! 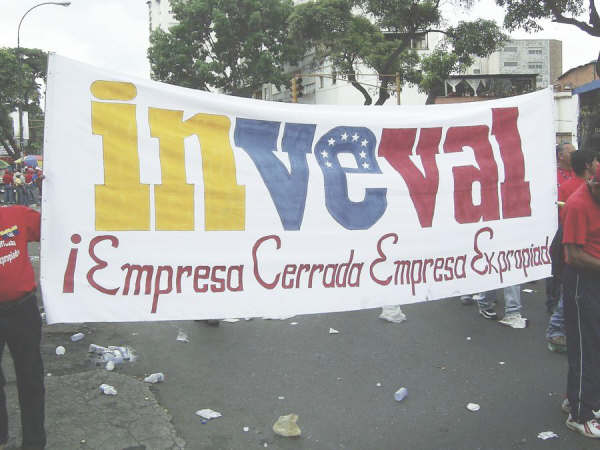 It
is now four years since the nationalisation of the Inveval valve in
Venezuela. Since then, the workers of Inveval have been running the
factory under workers' control, showing the way forward for the
building of socialism in Venezuela. After the expropriation of the
company in 2005 by president Chávez, they set up a democratically
elected, accountable and recallable factory council to coordinate
production, organised a trade union in order to link up with the rest
of the labour movement, and built links with the communal councils in
the state of Miranda, where they are based. They also organised the
Revolutionary Front of Occupied Factories (Freteco) together with the
workers of other companies occupied or nationalised (INAF, Gotcha, MDS,
Vivex, SIDOR and others).

The workers of Inveval have shown that workers can successfully run
a factory. For the last 4 years they have kept the company going by
repairing broken valves, and have prepared it for the production of new
valves. However, they have not been able to produce new valves because
of the constant hurdles put in their way by the state functionaries,
who are acting directly against the decisions of president Chavez. The
state bureaucracy does not want workers' control in Inveval to be
successful for very simple reason: they do not want it to become an
example to workers in other companies.

A socialist company should be part of a democratic plan coordinated
with the other state-owned companies, including having its own budget
covering raw materials, financing, etc. But the state bureaucracy is
working to suffocate Inveval economically. They are refusing to give
the factory a budget for 2009, on top of the fact that Inveval's budget
for 2008 has still not been transferred to the company. The workers of
Inveval have not been given any reason for this. This means, de facto, leaving Inveval in bankruptcy.

Additionally, in 2008, president Chavez gave the order to
expropriate Acerven in Tinaquillo, Cojedes, a company that makes the
casts which would allow Inveval to go from simply repairing valves to
manufacturing new valves for the oil industry. To this day, Chavez's
order has not been implemented. Meanwhile, the oil industry is
importing valves. This is a lucrative business for some people who are
putting pressure on the state functionaries so that Inveval is not
allow to manufacture new valves.

This whole situation of inefficiency and outright bureaucratic
sabotage has created enormous stress for the workers of Inveval. Four
years after the expropriation, functionaries of PDVSA and the Ministry
of Light Industries (Milco) continue to prevent the orders of president
Chavez, which would allow Inveval to work to full capacity, from being
implemented.

After the expropriations of Invepal and Inveval, the workers of the
Gotcha textile factory, of the bathroom fittings company INAF, and the
transport company MDS, also occupied their factories, in response to
attacks from the bosses, the lack of payment of social security
contributions, and the abandonment of production.

The
workers of these companies have made repeated appeals for these
companies to be expropriated, but so far they have received no answer
from the ministry in charge, Milco. There are some 150 workers who have
been resisting for the last 3 or 4 years in very difficult conditions.

Finally, there is the case of Vivex, an auto parts company in the
state of Anzoategui. In November 2008, the workers were faced with the
refusal of the boss to pay the full benefits pay to which they were
entitled. Responding to the appeal by president Chavez, who said that
the workers in companies where the bosses were denying them their
rights should occupy them, more than 300 Vivex workers took over the
plant. They have been in occupation for 6 months without receiving any
wages, and without receiving any response to their appeals to
functionaries of the Presidency who are dealing with their case.

There is an urgent need to demand the expropriation of these
companies to safeguard the jobs and source of income for hundreds of
families. 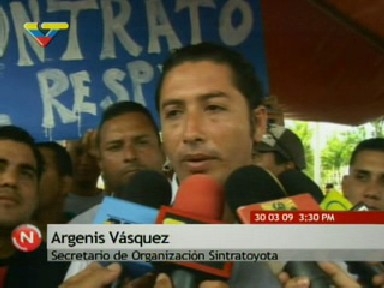 The
workers of Toyota, a car company in Cumaná, in the state of Sucre, have
been in struggle in defence of their collective bargaining rights and
in solidarity with the struggle of Mitsubushi workers in Anzoategui. As
part of their struggle, on March 6, 2009, they decided to occupy the
installations of the company, an occupation which they maintained for
several weeks.

On Tuesday, May 5, the general secretary of the union of Toyota
workers (Sintratoyota), Argenis Vazquez, was assassinated when he was
on his way to a meeting with management. This is a new case of
assassination of militant trade union leaders in Venezuela, after the
assassination of the 3 UNT trade union leaders in Aragua in November
2008, and the killing of two Mitsubishi and Macusa workers at the hands
of the police in Anzoategui in January 2009 (an attack which was
directed against Felix Martínez, the general secretary of the
Mitsubishi workers' union Singetram). We demand a full inquiry into
this assassination and that those responsible be brought to justice.

For
all of these reasons we make an appeal to the Venezuelan people, the
international working class and all those who support the struggle of
the workers for their emancipation to send messages to president Chavez
asking for:

Knowing of the problems faced by the workers in the occupied
factories in Venezuela, we ask you for a quick solution to their
problems in the following terms:

1) The expropriation of Acerven under workers' control

2) Do not leave Inveval at the mercy of the capitalist market. For a
2008 and 2009 budget for the company, as part of a plan of production
with PDVSA and the Ministry of Science and Technology.

4) The expropriation of Gotcha, INAF, MDS and Vivex - for the defence of jobs and livelihoods of hundreds of families.

5) Stop the killings of trade union activists - Full inquiry into
the killing of Argenis Vazquez, general secretary of Sintratoyota -
those responsible should be brought to justice, both those who carried
out the killing and those who ordered it.

Sep 22nd 2022
Vice-President Tareck El Aissami announced that Venezuela was seeking the arrest of 23 individuals over their alleged involvement in corruption at Monómeros.
END_OF_DOCUMENT_TOKEN_TO_BE_REPLACED