On August 20, the Economist ran an article on Venezuela saying that “forced migration from the country might surpass the Syria crisis.” The magazine reported:

The UN’s International Organization for Migration estimates that at the end of 2017 approximately 1.6 million Venezuelans were living outside their country. Today that number is likely to be far higher: as of June 2018 there were nearly 1 million Venezuelan migrants in Colombia alone. The UNHCR, the UN’s refugee agency, has recorded 135,000 asylum applications from Venezuelans during the first seven months of 2018, already 20 percent more than for the whole of 2017. The total number of displaced Venezuelans may already have reached 4 million, out of a population of some 30 million. The outflow could eventually surpass the 6 million people who have fled the Syrian civil war.

The UN’s International Organization for Migration estimates that, by July of 2018, 2.3 million Venezuelans were living abroad (which includes hundreds of thousands who have spent decades abroad).  Why does the Economist say it “may already” be 4 million? A good guess is that they are relying on the estimates of Tomas Paez, a vehemently anti-government Venezuelan academic who has long been a favorite source for corporate journalists (FAIR.org, 2/18/18). Paez has estimated that 1.6 million people left Venezuela from 1999–2015, about five times more than UN Population Division estimates for that period.

No doubt as Venezuela’s economy entered what could fairly be called a “collapse” starting in 2015, migration began to skyrocket, and it is indeed likely to get worse, thanks to illegal economic sanctions that Trump enacted in August 2017.

What about the Economist‘s Syria comparison? First of all, Syria’s civil war has not just created a massive “outflow” of refugees. It also created an enormous population of internally displaced people, as wars typically do. As of 2017, Syria had 6 million people forcibly displaced within its borders. Another 5 million refugees were still living in three bordering countries (Jordan, Lebanon and Turkey). That brings the total of those forcibly displaced by Syria’s civil war to nearly 11 million—almost seven times larger than the most credible estimate of the numbers displaced (so far) by Venezuela’s economic crisis.

Syria had a population of about 21 million in 2011 when the civil war began. It has now been estimated to be about 18 million. So more than half of Syria’s 2011 population are now refugees, either internally or externally—a far cry from the 13 percent of the Venezuelan population claimed by Paez (and hinted at by the Economist), or the 5 percent (1.6 million) estimated by the UN’s International Organization for Migration to have left since 2015.

The Economist doesn’t mention that US policy (backed by the entire Western establishment) is to use harsh and illegal economic sanctions to deliberately make Venezuela’s economic crisis worse, which will help drive more people to leave the country. US economist Mark Weisbrot, who was recently given a very rare bit of space to state this fact, noted afterwards that

Brian Ellsworth, a journalist for Reuters who reports from Venezuela, has joined the latest avalanche of trolls, bots and blowhards who swarmed me because I dared to mention on BBC World TV, on Friday night, that Trump’s financial embargo against Venezuela makes it more difficult for any government to stabilize the economy—a fact that no economist would dispute. Indeed, that is the purpose of the embargo.

The Western establishment includes prominent human rights groups, who often express the same imperial perspective one finds in the Economist.  By citing these outfits, corporate media seem to provide critical assessments that are independent of Western officialdom. Don’t buy it. Amnesty International has refused to oppose US economic sanctions on Venezuela, and has also refused to denounce flagrant efforts by US officials to incite a military coup. Amnesty’s Americas director Erika Guevara-Rosas tweeted the dubious Economist article comparing Venezuela to Syria. 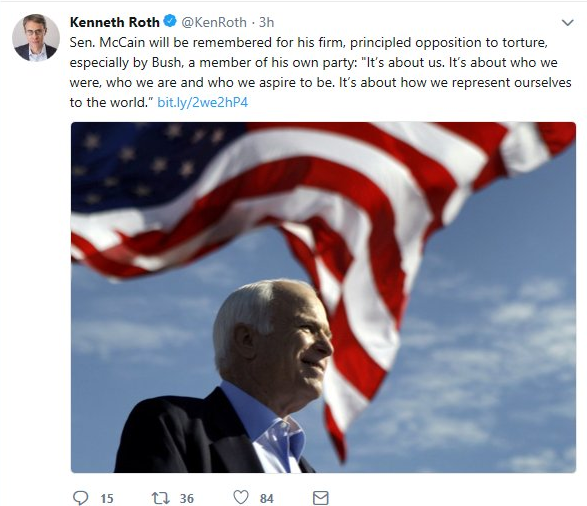 Guevara-Rosas also tweeted out an article praising John McCain. McCain’s death has been a real “teachable moment,” showing how tiny the ideological differences are between corporate media and the human rights industry. Four different Human Rights Watch (HRW) officials used their Twitter accounts to spread praise for McCain. In 2011, McCain tried to have Venezuela placed on the US “sponsors of terrorism” list—not scary at all, coming from a man who joked about bombing Iran. McCain dutifully echoed the Venezuelan opposition’s line (also the Western media line, and HRW’s line) that the country is a “dictatorship.”

Ken Roth (HRW’s executive director) said McCain “will be remembered for his firm, principled opposition to torture, especially by Bush, a member of his own party.” Jose Miguel Vivanco said McCain was “a giant in North America politics and an ally in the defense of human rights.” Sarah Margon, HRW’s Washington director, said that McCain’s death ”feels exceptionally tough for those of us who have fought for human decency and basic rights alongside and with him.” Dinah PoKempner, HRW’s general counsel, spread an article that called McCain a “war hero.”

HRW followed up with an official statement saying McCain “was for decades a compassionate voice for US foreign and national security policy.”

And, of course, the Economist’s obituary (8/30/18) similarly laid the praise on thick, casting McCain as part of a heroic Republican “resistance” to Donald Trump: “The talk was never straighter, the stance never more upright, than when he called on his fellow Republicans not just to endure, but to resist.” McCain voted with Trump 83 percent of the time, according to theFiveThirtyEight website.

The victims of empire are never more invisible than when it is time to whitewash a departed warmonger. McCain’s “war hero” credibility stems from being a direct perpetrator of, and not simply a cheerleader for, the mass slaughter in Vietnam that took the lives of millions of people—or “gooks,” as McCain unapologeticallypreferred to call them. It is left to independent voices like Max Blumenthal (Consortium News, 8/27/18), to review McCain’s bloodthirsty record:

McCain did not simply thunder for every major intervention of the post-Cold War era from the Senate floor, while pushing for sanctions and assorted campaigns of subterfuge on the side. He was uniquely ruthless when it came to advancing imperial goals, barnstorming from one conflict zone to another to personally recruit far-right fanatics as American proxies.

In Libya and Syria, he cultivated affiliates of Al Qaeda as allies, and in Ukraine, McCain courted actual, sig-heiling neo-Nazis.

While McCain’s Senate office functioned as a clubhouse for arms industry lobbyists and neocon operatives, his fascistic allies waged a campaign of human devastation that will continue until long after the flowers dry up on his grave.

Unless there is radical change—real “resistance”—that transforms the organizations that people rely on to be ”informed” (media and NGOs included), Donald Trump, like Nixon, Reagan and George W. Bush, will eventually be whitewashed as well.

Joe Emerberger is a writer based in Canada whose work has appeared in Telesur English, ZNet and Counterpunch.

Sep 13th 2018
In its coverage of Venezuela and John McCain's death, the international corporate media is uniform in its defense of US imperial interests.

Sep 10th 2018
According to a report by the New York Times, United States officials have been meeting with Venezuelan coup plotters...

Sep 3rd 2018
The Brazilian state of Roraima is facing a potential loss of electric supply as the economic blockade prevents them from paying a US$40 million debt to...

Sep 3rd 2018
President Evo Morales denounces US Senator Marco Rubio's threat of using the 'Empire's army against the people of Venezuela because he assumes a...

Aug 30th 2018
The Maduro administration contrasted the recent attacks against Venezuelan migrants to its own open door policy which has seen foreigners benefit from free...

Aug 30th 2018
Venezuela’s back in the news due to its economic woes. But amid all the bad news, there are important stories that are not making it into the...

Jan 24th 2023
Chris Gilbert and Cira Pascual Marquina look at the Venezuelan communes as a key force in an extended process of national liberation and social...
END_OF_DOCUMENT_TOKEN_TO_BE_REPLACED