The International Monetary Fund (IMF) has done it again. In an attempt to garner some press, the head of the IMF’s Western Hemisphere Department Alejandro Werner forecasted that Venezuela’s annual inflation rate will reach 1,000,000% by year’s end. By my calculations, this inflation forecast implies that the exchange rate will reach 923 million VEF/USD by December 2018. To put this into context, the exchange rate at the end of July was 3.3 million VEF/USD, and at the end of June it was 3.1 million VEF/USD.

The IMF’s most recent inflation forecast is, to put it mildly, stunning. It is also bogus. No one can forecast the course or duration of a hyperinflation with any degree of accuracy. Never mind. The IMF just keeps on making forecasts of Venezuela’s inflation. And the press keeps on uncritically reporting the IMF’s bogus numbers as if they were credible. The IMF and the press are clearly unaware of the fact that hyperinflation can be measured, and measured very accurately, but it cannot be forecasted.

Until the April 2018 World Economic Outlook (WEO), the IMF wrote the same general disclaimer about its Venezuelan numbers in each issue of its report:

Projecting the economic outlook in Venezuela, including assessing past and current economic developments as the basis for the projections, is complicated by the lack of discussions with the authorities (the last Article IV consultation took place in 2004), long intervals in receiving data with information gaps, incomplete provision of information, and difficulties in interpreting certain reported economic indicators in line with economic developments.”

In the April 2018 WEO, the disclaimer was altered. It now includes:

The effects of hyperinflation and the noted data gaps mean that IMF staff’s projected macroeconomic indicators need to be interpreted with caution.”

These disclaimers are laughable. No one has ever been able to accurately forecast the course or the duration of an episode of hyperinflation. But, that hasn’t stopped the IMF from offering up inflation forecasts for Venezuela that have proven to be wildly inaccurate. And, for an example of the absurdity of the IMF’s projections, just consider its WEO year-end forecasts for 2018 and 2019. The values for both years are exactly the same: 12,824.6%. These forecasts are blatantly absurd. After all, the current measured annual inflation rate is already by my calculations 33,151%. And the same forecasts for both 2018 and 2019 contain a touch of spurious accuracy to boot: note the decimal point. And now we have a new forecast for 2018, a whopping 1,000,000%.

The most important price in an economy is the exchange rate between the local currency – in this case, the bolivar – and the world’s reserve currency, the U.S. dollar. As long as there is an active black market (read: free market) for currency and the data are available, changes in the black market exchange rate can be reliably transformed into accurate measurements of countrywide inflation rates. The economic principle of purchasing power parity (PPP) allows for this transformation. And the application of PPP to measure elevated inflation rates is rather simple.

During periods of elevated inflation, PPP is the proper theory to use for measurement. Indeed, PPP holds during episodes of hyperinflation, and it holds very tightly. Beyond the theory of PPP, the intuition of why PPP represents the ‘gold standard’ for measuring inflation during hyperinflation episodes is clear. All items in an economy that is hyperinflating are either priced in a stable foreign currency (the U.S. dollar) or a local currency (the bolivar). If they are bolivar prices, they are determined by referring to the dollar prices of goods, and then converting them to local bolivar prices after checking with the spot black-market exchange rate. Indeed, when the price level is increasing rapidly and erratically on a day-by-day, hour-by-hour, or even minute-by-minute basis, exchange rate quotations are the only source of information on how fast inflation is actually proceeding. That is why PPP holds and why I and my Johns Hopkins-Cato Institute Troubled Currencies Project team can use high-frequency (daily) data to calculate Venezuela’s annual inflation rate.

Venezuela’s hyperinflation, which has been roaring away since November 2016, is depicted in the chart below. Today (7/31/18), the annual inflation rate for Venezuela sits at 33,151%. This accurate MEASUREMENT means that Venezuela is now experiencing the 23rd most severe episode of hyperinflation in history. 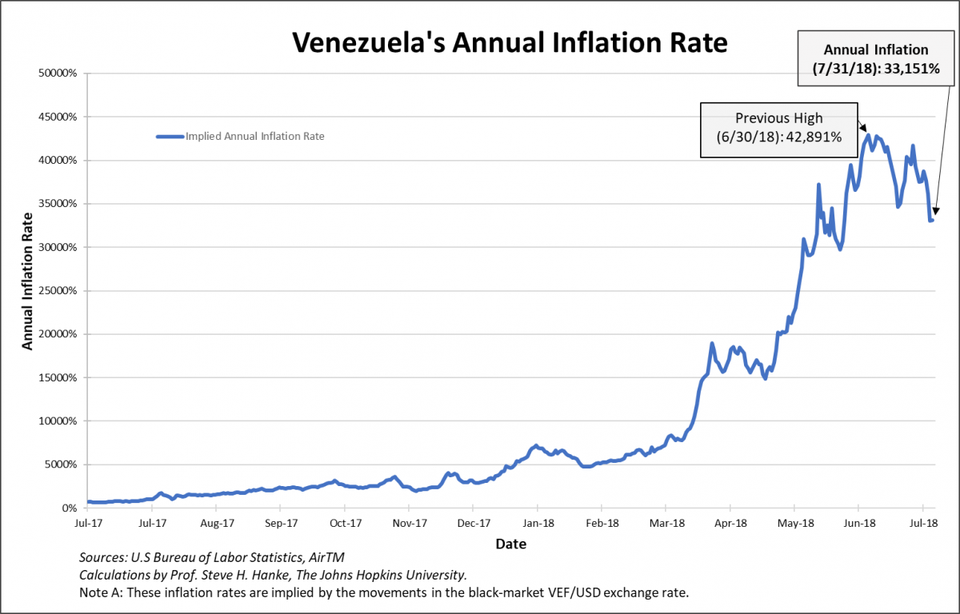 Steve H. Hanke is a professor of applied economics at The Johns Hopkins University and senior fellow at the Cato Institute. He is also an economist, author, currency expert, and White House Alum.

Oct 18th 2018
The IMF and the CEPAL predict a diminution of Venezuela’s crisis next year, with Torino Capital even forecasting modest economic growth.

Aug 9th 2018
Nino Pagliccia looks at the impacts of the increasing sanctions against Caracas.

Jul 31st 2018
Venezuela’s hyperinflation is now exceeding 200% per month. President Maduro plans to introduce a new currency that is tied to Venezuela’s oil...

Jul 26th 2018
The measures also transfer an entire oilfield from PDVSA to the Central Bank.

Nov 25th 2022
Venezuelanalysis is almost 20 years old! To celebrate we want to share with you a neat infographic that explains our grassroots journalism and how you can...
END_OF_DOCUMENT_TOKEN_TO_BE_REPLACED