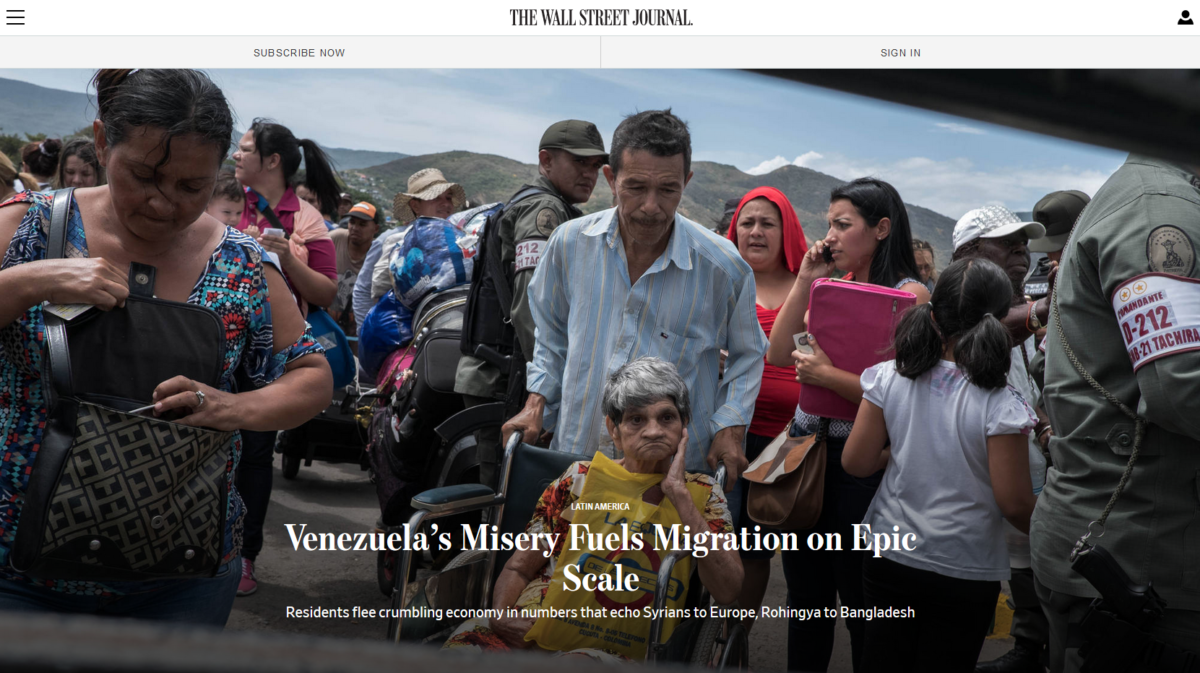 Forero’s article quoted a UN official: “By world standards, Colombia is receiving migrants at a pace that now rivals what we saw in the Balkans, in Greece, in Italy in 2015, at the peak of [Europe’s] migrant emergency.” Further on, Forero says, “The influx prompted Colombian officials to travel to Turkey last year to study how authorities were dealing with Syrian war refugees.”

Two enormous problems with the way Forero and his editors have framed this article should immediately stand out:

1. Colombia’s population of internally displaced people is about 7 million, and has consistently been neck and neck with Syria’s.  According to the UNHCR, as of mid-2016, Colombia is also the Latin American country which has the most number of refugees living outside its borders: over 300,000, mainly in Venezuela and Ecuador. Forero and his editors picked the wrong country to compare with Syria.

2. Greece and Italy do not share a border with Syria, nor do the Balkans as they are generally defined. Colombia and Venezuela, by contrast, share a very long border.  Forero’s comparison, therefore, excludes states that border Syria. Three of those bordering states—Lebanon, Jordan and Turkey—collectively absorbed 4.4 million Syrian refugees by 2016; five years after war broke out in Syria, Turkey alone took in almost 3 million.

It’s very important to expand on the first point.  Colombia is a humanitarian and human rights disaster, and has been for decades, in very large part due to its close alliance with the United States. Thanks to Wikileaks (CounterPunch, 2/23/12), we know that US officials privately acknowledged estimates that hundreds of thousands of people were murdered by right-wing paramilitaries, and that the killings have nearly wiped out some indigenous groups. Those genocidal paramilitaries have worked closely with the Colombian military that Trump Chief of Staff John Kelly praised in 2014 as a “magnificent” US partner.  “They’re so appreciative of what we did for them,” raved Kelly. 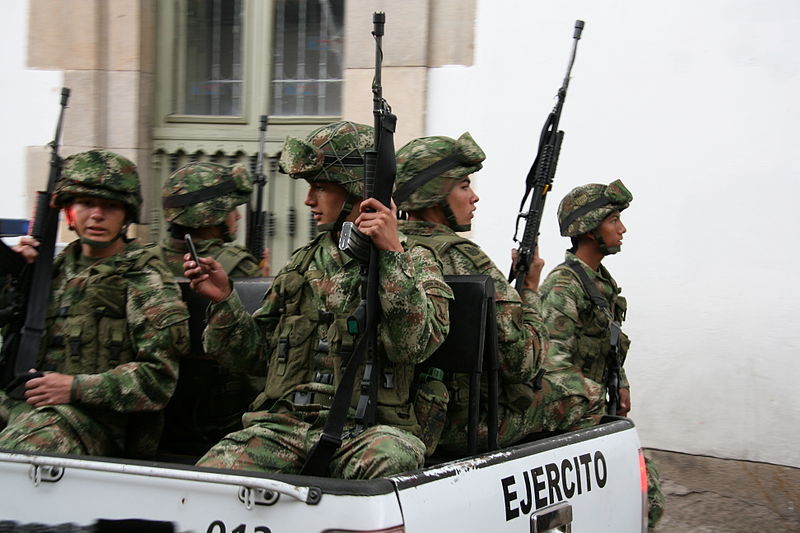 Praise for Colombia’s government has also come from the liberal end of the US establishment, albeit with much more subtlety than from Kelly. In 2014, a New York Times editorial (9/21/14) stated that “Colombia, Brazil and other Latin American countries should lead an effort to prevent Caracas from representing the region [on the UN Security Council] when it is fast becoming an embarrassment on the continent.” So to Times editors, Colombia is a regional good guy that must lead its neighbors in shunning Venezuela.

Colombia’s current president, Juan Manuel Santos, was minister of Defense from 2006 to 2009. From 2002 to 2008, the Colombian military murdered about 3,000 civilians, passing them off as slain rebels. As human rights lawyer Dan Kovalik explained (Huffington Post, 11/20/14) , the International Criminal Court (ICC) “concluded that these killings were systemic, approved by the highest ranks of the Colombian military, and that they therefore constituted ‘state policy.’” The murders occurred with the greatest frequency between 2004 and 2008, which Kovalik observed “also corresponds with the time in which the US was providing the highest level of military aid to Colombia.”

If Colombian and US officials evade prosecution for all of this, it will be with the help of corporate media—as well as the severe limitations powerful governments impose on international bureaucracies like the ICC. Kovalik remarked:

You might say, no official of the US can be prosecuted by the ICC because the US has refused to ratify the ICC treaty. While this may appear to be true, this did not stop the ICC from prosecuting officials from the Sudan—also not a signatory to the ICC.

The closest Forero came in his article to even hinting at any of these gruesome facts was when he wrote that “Colombia has long had troubles of its own, including integrating former Communist guerrillas from a civil conflict that only ended recently.”  The “conflict” has not exactly “ended,” given that 170 leftist political leaders and activists were assassinated in 2017.

Putting aside Forero’s epic distortions by omission regarding Colombia, what about his reporting about migration from Venezuela? He wrote:

Nearly 3 million Venezuelans—a tenth of the population—have left the oil-rich country over the past two decades of leftist rule. Almost half that number—some 1.2 million people—have gone in the past two years, according to Tomás Páez, a Venezuelan immigration expert at Venezuela’s Central University.

In April 2002, Páez signed his name to a quarter-page ad in the Venezuelan newspaper El Nacional that welcomed the dictatorship of Pedro Carmona, then head of Venezuela’s largest business federation, who was installed after a US-backed military coup briefly ousted the late President Hugo Chavez. I’ve written before (ZNet, 1/16/17) about Western outlets—New York Times (11/25/16), Reuters (10/15/14) and Financial Times (8/22/16)—citing Páez without disclosing his anti-democratic record.

The World Bank has compiled data over the years on the numbers of Venezuelan-born people living abroad. The numbers point to far smaller migrations than Páez has estimated: 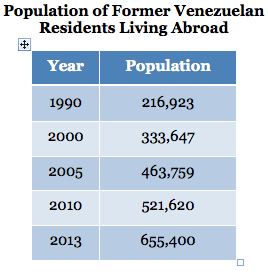 Data in table can be found here, here,here and here.

During the years Chavez was in office (1999–2013), the World Bank’s figures tell us Venezuelans living abroad increased by about 330,000. By 2013, Páez was estimating that about 1.3 million had left—about 1 million more than World Bank estimates. Would journalists ignore data published by the World Bank in favor of estimates by Páez if he were a staunch supporter of the Venezuelan government?

During those 1999–2013 years, the World Bank figures also say that the number of Colombian-born people living in Venezuela grew by 200,000. Forero’s article implies that migration from Colombia to Venezuela ended in the “late 20th century.”

The World Bank has not updated migration data past 2013, but there is no doubt there was a huge increase in migration from Venezuela since its economy entered into a very deep crisis starting in late 2014. (For an overview of the important role of US policy in creating the crisis and now deliberately making it much worse, see my op-ed, “US Policy a Big Factor in Venezuela’s Depression”—Tribune News Service, 2/2/18.)

US government data show migration from Venezuela to the United States increasing from about 7,000 per year before 2013 to 28,000 per year by 2015, including Venezuelans who have entered without authorization. 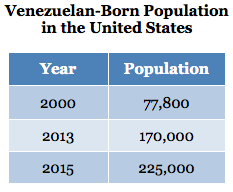 Numbers in the table can be found here and here.

From 2000 to 2013, the United States was the destination for about 30 percent of Venezuelan-born people who left to live abroad, according to the World Bank figures. If the Colombian university study and US government data are accurate, then the United States has been the destination for about 20 percent of Venezuelan migrants after 2013. That would mean about 140,000 Venezuelans per year were leaving to live abroad by 2016.

That is not remotely comparable to the 5 million Syrians who fled the country in the first five years following the civil war—and that doesn’t include over a million per year who fled their homes inside Syria (the internally displaced).

That Forero would even try to force this comparison into his article speaks volumes. It’s not hard to guess why it was made, given that US has bombed Syria regularly and has had Venezuela’s government in its crosshairs for almost two decades.

Aug 30th 2018
The Maduro administration contrasted the recent attacks against Venezuelan migrants to its own open door policy which has seen foreigners benefit from free...

Aug 23rd 2018
The moves come amidst a rise of xenophobic attacks against Venezuelans across the region.

Jun 28th 2018
He also talked to Trump, stating that "It was a friendly conversation... I thank him and we will continue working to widen our relationship with the...

Jun 22nd 2018
The ultra-rightist also announced his withdrawal from UNASUR.

Mar 15th 2018
With so many politically charged figures knocking around about Venezuelan emigration and a so-called “exodus”, who should we believe?

Mar 8th 2018
As tensions rise following the militarization of the border of Venezuela and Colombia, activists, organizations and social movements from both countries came...

Feb 15th 2018
Venezuelan President Nicolas Maduro asked his ministers for defence and foreign relations to organise a meeting with the Colombian government later this week.

Feb 9th 2018
Colombia says it will send more than 2000 more troops to its border with Venezuela, with Brazil replicating the measure.

Jan 26th 2018
More than 200 Venezuelans were reportedly evicted from a makeshift camp in Cucuta.

Mar 1st 2016
The Venezuelan government partially lifted its six-month closure of the Colombian border on Saturday, allowing the crossing of heavy-load vehicles during...

Apr 10th 2014
While most first world and imperialist countries criminalise refugees and undocumented migrants, scapegoating them, promoting racism, and mistreating them,...

Apr 2nd 2020
Venezuela denounced an attack on one of its naval vessels in recent days.

Apr 1st 2020
Washington's latest escalation may have blocked an urgently needed political settlement in Venezuela to battle the coronavirus.

Mar 30th 2020
Moscow insists that its support for the Venezuelan government and role in its oil industry will remain unchanged.

Mar 29th 2020
Cliver Alcala had recently confessed to plotting a coup against the Venezuelan government.
END_OF_DOCUMENT_TOKEN_TO_BE_REPLACED

END_OF_DOCUMENT_TOKEN_TO_BE_REPLACED

Ear to the Ground #11: VA Exclusive with the Embassy Protection Collective