Buzzfeed recently had a crack at drawing attention to Venezuela’s food scarcity problem. Unfortunately most of its claims were wildly off the mark.

The video by Buzzfeed’s Pero Like channel starts with their hugely popular formula consisting of a bunch of people sitting down to try something – normally a strange food, or something fun. However, the twist quickly kicks in when the participants are handed bags of basic food products like rice, beans and cooking oil. These bags are food deliveries from the CLAPs, which are community groups that distribute basic goods in Venezuela. The idea behind the CLAPs is to provide ordinary Venezuelans with basic goods that are often unavailable in supermarkets – or so expensive as to be pretty much unaffordable.

The CLAPs are somewhat controversial in Venezuela for a number of reasons, with many people questioning their effectiveness. The opposition has also accused the CLAPs of prioritising government supporters. It’s a complicated issue, so what’s Buzzfeed’s take?

Well … they get a few basics wrong, such as:

1. The CLAPs are the “Venezuelan diet”

The title of the video itself, ‘People Try The Venezuelan Diet’, is a little misleading. The CLAPs aren’t the Venezuelan diet. As mentioned earlier, the bags are supposed to provide bare-bones basic goods, particularly things that ordinary Venezuelans might struggle to get hold of. However, the video leaves the viewer with the impression that all Venezuelans are allowed to eat is a sack of rice and some beans. Even the participants seem to think this.

“There’s like, no veggies or anything,” one participant said.

That’s exactly true. The CLAPs don’t distribute fresh produce, because vegetables are generally neither scarce nor unaffordable in Venezuela. For example, a kilo of onions in Caracas will set you back around BsF1000, which is around 36 cents. Given how nobody is hurting for onions in Caracas, it makes sense that the government doesn’t include them in those CLAP bags. The same could be said for any number of products in the typical Venezuelan diet that don’t appear in the bags. There’s usually no potato chips or chocolate either, let alone other commonly consumed products like beer, rum or cigarettes. To really ram this point home, let me put it this way: if a bunch of Venezuelans went to a soup kitchen in the US, wouldn’t it seem a little disingenuous if they said the basic food they found constituted the typical American diet?

According to Buzzfeed, their bags cost between US$200 to US$550, which seems like a lot for just a few packets of spaghetti, rice and milk. If you think those prices are unbelievable, then congratulations, you’re qualified to take my job.

Yes, those prices are totally nonsensical. In reality, those bags probably cost around BsF8000-9000. At the current black market exchange rate, that’s around US$3-4; in other words, roughly 100 times less than Buzzfeed’s lowest estimate. I tried to contact Buzzfeed prior to publishing this article for clarification on how they got those numbers, but they didn’t reply.

Admittedly, it’s understandable if Buzzfeed got these numbers wrong. Venezuela’s Byzantine currency exchange system can be bewildering, especially to anyone who doesn’t know the country very well. Assuming there weren’t any Venezuelans/ well informed Venezuela observers involved in the video’s production, then this mistake would be passable. As an aside, at the government’s SIMADI exchange rate, the bags cost around US$12. The government also has a priority exchange rate reserved for critical imports that would make the bags cost US$800. However, this rate really isn’t applicable here; in either case, it’s still not particularly close to Buzzfeed’s numbers.

The video also includes a long debunked claim that a carton of eggs costs US$150. This claim appears to have originated from an LA Times article from back in May. For the record, at the time, eggs were selling for around US$3. The LA Times article looked like it was inspired by an AFP piece from earlier that month, which popularised a bogus claim that hamburgers cost US$170 in Caracas (around US$4 at the time). That original article has since been retracted by AFP.

3. Unemployment has made food unaffordable

At the start of the video, one of the participants had a crack at explaining Venezuela’s economic situation. They did a reasonable job off the cuff, but threw in a claim that unemployment had gone up due to the economic downturn. This was reinforced by a graphic by Buzzfeed, which appeared to suggest Venezuelans were being squeezed by inflation on one hand, and unemployment on the other. Inflation is certainly a problem in Venezuela, but unemployment isn’t. In fact, 2016 has seen some of the country’s lowest monthly unemployment rates in two decades. So while it may be a reasonable assumption that an economic downturn would be accompanied with mass job losses, this simply isn’t the case in the Venezuelan context. A little background research on Buzzfeed’s behalf would have gone a long way here.

4. The bags wouldn’t feed a single person for even a week

“If you were one person, you could maybe live on this for a week, but you’d be very hungry,” one participant noted after rummaging through their bag. Presumably, this participant wasn’t informed that these bags aren’t supposed to constitute an entire diet – they’re just the bare basics. So, how long does a CLAP bag last? Well, VA’s own Rachael Boothroyd Rojas recently grabbed a bag. Here it is: 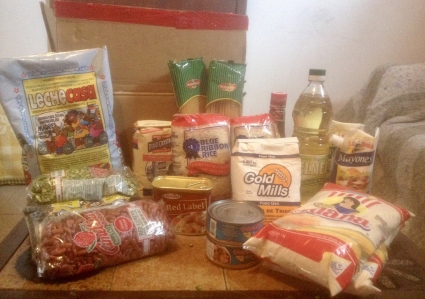 Though she said it’s hard to gauge, Boothroyd Rojas said most of the products should last a few weeks for a small family, obviously when incoporated into meals alongside other goods.

“It depends what your eating habits are like,” she said.

However, she did say her bag had enough milk, cooking oil and beans to last a small family around a month, while the rice and flour might cover a week or two. Although the family would undoubtedly have to look for alternatives to that old Venezuelan favourite side-dish "tajadas" - or plantains deep-fried in vats of oil.

“For a big family it's not going to last long, but obviously you compliment it with other stuff,” she said. So, the bags aren’t exactly mythical cornucopias, but they’ll last you more than a week.

5. The CLAPs are pretty useless

It’s hard to come away from the video without feeling as though the CLAPs are a bit of a waste of time. Indeed, that seemed to be the conclusion of all the participants – but do Venezuelans agree? Actually, 58 percent of Venezuelans support the CLAPs, according to a survey by independent pollster Hinterlaces back in October. A more recent study from Hinterlaces also found household scarcity of basic goods has been consistently declining since the CLAPs were introduced. So, the data shows that Buzzfeed’s take on the CLAPs just doesn’t match up with the views and experiences of the majority of Venezuelans.

This isn’t really a mistake, but more of an interesting issue raised during the video. At one point during the video, one of the participants asked a very important question, “Why don’t they force more things and money into farming?”

It’s a good point, and in fact one that has been at the heart of Venezuelan political debate for almost a century. For decades, Venezuela has imported most of its food. This situation has its roots in the early 20th Century, when the country’s oil industry first started revving to life. During that period, the oil industry grew so rapidly that it crippled other sectors of the economy such as agriculture. This phenomenon is actually pretty common among oil producing nations, though President Nicolas Maduro’s predecessor, Hugo Chavez, did try to reverse this. As I explained in a longer piece for Counterpunch earlier this year, the data shows Chavez had some success with boosting agricultural output until the 2008 GFC ruined everything.

Since then, Venezuela’s agricultural sector just hasn’t been able to regain its footing. In any case, agricultural productivity isn’t really the immediate problem for Venezuela. The main issue right now is a collapse in government revenue due to low oil prices, combined with a currency crisis linked to those afore mentioned exchange controls.

It’s always good to see people taking an interest in Venezuela, especially when they’re trying to highlight an important, controversial issue like the CLAPs. However, after going through all these errors, it feels like Buzzfeed deliberately tried not to give the CLAPs a fair hearing. Instead, participants were given a bag of basic kitchen products and told that’s all they’re allowed to eat. The little context provided was almost entirely comprised of facts that were simply – and indisputably – totally wrong.

In this situation, it’s no surprise participants had very different views of the CLAPs than ordinary Venezuelans. One participant even said, “I don’t like people telling me what to do, especially with my food”.

But of course, nobody is telling anybody they have to make use of the CLAPs. Venezuela does have countless supermarkets, markets and corner stores, and the CLAPs aren’t some sort of mandatory food program that requires every Venezuelan consume X grams of rice and shove an entire chicken in their mouth once a week. Likewise, Buzzfeed’s background information on everything from unemployment to food prices was simply empirically wrong, and not helpful for anyone trying to understand the real “Venezuelan diet”.

None of this is to say the CLAPs are perfect. However, if you want nuanced discussion of the CLAPs and food scarcity, check out this critical analysis by Atenea Jimenez. Or, read more about the experiences of VA writers with the CLAPs here. I also tried to address the question of the effectiveness of the CLAPs in VA’s podcast a few weeks back. Any and all of these would be more informative than Buzzfeed’s video. But hey, if you want to see it for yourself, check it out below.

Jan 12th 2017
VA's Lucas Koerner proves how any story about the South American nation is seamlessly woven into a preexisting media narrative of the country’s...

Jan 6th 2017
Venezuelan Minister of Urban Agriculture Lorena Freitez reflects on this one of a kind ministry's first year in existence and shares her vision for 2017-2021.

Jun 9th 2016
Here's a free tip for anyone keen to write about Venezuela: do some research first. Please!

Jan 15th 2013
In their latest intervention into the debate over freedom of expression in Venezuela, Human Rights Watch has once again got it wrong.