Venezuela has never exactly been given a free pass in the international mainstream media. However it’s fair to say that recent reports emanating from outlets such as the New York Times, the Associated Press, and even the UK’s Independent, have been nothing short of apocalyptic. Any reader would be forgiven for thinking that Venezuela's 28 million people are on the verge of socialism-induced starvation, spending their weekends attempting to flee the country on makeshift rafts, or suffering from lethal dehydration in queues to get clean drinking water or withdraw cash from banks controlled by government narco-villains.

That’s why VA wants to highlight three things that happened to its staff this week which totally contradict this corporate media narrative.

1) One of our writers received their CLAP bag

Known as the Local Provision and Production Committees, the CLAPs are the Maduro government’s response to the scarcities in basic foodstuffs that have affected the population over the past two years, as well as to the phenomenon of queuing which developed in response to these shortages, which saw masses of citizens lining up outside government stores to purchase subsidised goods in the first half of this year and the latter part of 2015.

The premise of the CLAPs is quite straightforward – local communities organised into communal councils use the census conducted by their elected spokespeople to organise the transport and distribution of bags of food provided by Venezuela’s Food Ministry. To put it simply, if your community census shows that there are 108 families who fall within the jurisdiction of your communal council, then that community council can officially solicit 108 food bags from the government. To do this, the communal council works in conjunction with CLAP representatives nominated for each street and local representatives from the women’s federation UNAMUJER, the Francisco Miranda Front, and the United Socialist Party of Venezuela’s UBCH “battle units”. The transport of the food bags and their distribution is then organised by the community representatives from each of these groups.

Our VA writer’s bag included; four one-kilo packets of beans, two one-kilo packets of rice, two tins of tuna, a litre of cooking oil, a bottle of mayonnaise and tomato ketchup, two packets of pasta, a kilo of powdered milk, a kilo of corn flour for arepas, a kilo of sugar and plain flour, as well as a tin of spam. It cost 8,200 bolivars with an additional 350 bolivars for transport. A total of just over US$13 dollars at the official rate and US$2.22 at the black market rate. 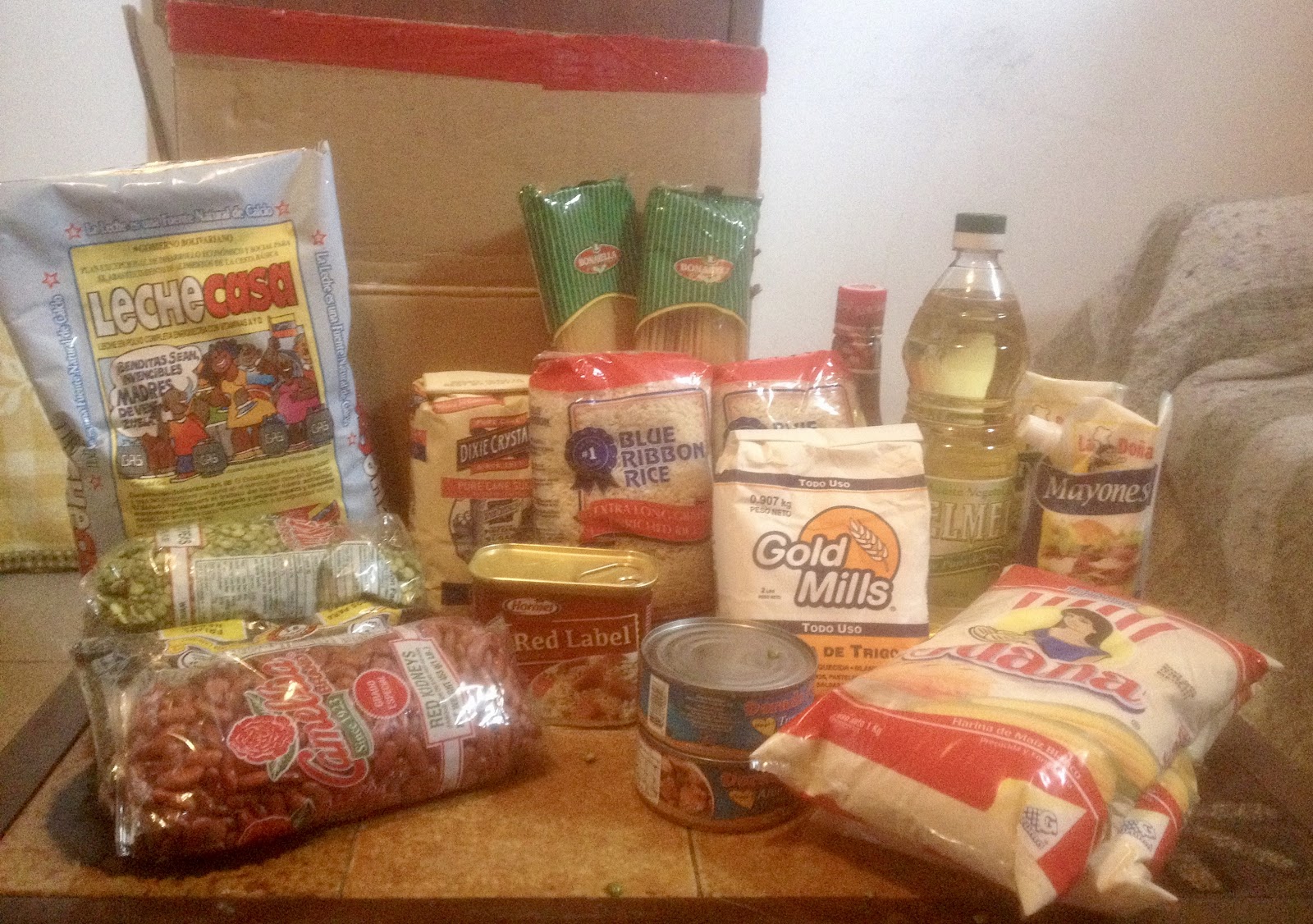 It’s true that the CLAPS still have a lot of imperfections. To date, their coverage has been uneven and infrequent, and middle class areas have complained that they have been neglected by the new policy. Meanwhile the top-down structure of the CLAPs imposed by central government also means that local community groups who have the legitimacy and knowhow to conduct such operations are being displaced by representatives from institutions such as UNAMUJER, which have no history of organizing in a given area. It’s also no exaggeration that the CLAPs can be a further burden on already tired-out community spokespeople, who are sometimes put at risk of robbery when responsible for the collection of large amounts of money, and who must likewise face the wrath of the local community if the state fails to produce the goods. In the long term, some critics have also pointed out that the CLAPs are overly-reliant on food imports from private companies in countries such as Panama, and do little to promote national or community based production initiatives. Evidently, there are lots of details that still need to be hammered out.

In spite of these issues, however, the CLAPs are undeniably beginning to have a real and relatively short term impact on issues such as the scarcity of staple goods in Venezuelan households, as well as proving increasingly popular with citizens. A recent report from the pollster Hinterlaces revealed that household shortages had consecutively decreased since the CLAPs began to operate, with the General Household Scarcity Index having dropped from 46.8% in June to 35.3% at the end of October.

The political involvement of the community in the distribution of food is also a significant blow to the traditional power of Venezuela’s private retail chains, who have historically been responsible for importing goods, and which have often used this power to intervene in national politics in a reactionary way. As economist Pasqualina Curcio's research has shown, scarcities in staple goods have historically spiked around election time since the Bolivarian revolution came to power.

This might seem like a bizarre statement to make for readers in the US or Europe, however there is probably no Venezuelan who doesn’t recoil just a little at the thought of having to resolve some kind of issue at their bank.

It’s true, these impenetrable bureaucratic monsters are sometimes capable of reducing a grown person to the foetal position in a matter of hours, and readers have undoubtedly been treated to endless mainstream media photos of people queuing to withdraw cash – a supposed symbol of Venezuela’s descent into the dreaded failed state category.

What these photos fail to make clear, however, is that Venezuela’s infamous bureaucracy long predates the Chavez government, and that a visit to the bank does not always require taking four days off work. Often this much coveted errand is affected by regional differences, fluctuations in activity according to the time of year (hello, Christmas), and whether it’s payday or not. For instance, withdrawing cash is much more difficult in the border state of Maracaibo than in Caracas, precisely because of the impact of borderland economics. There is also the rather dubious omission of the fact that, if indeed there are now more people than ever using Venezuelan banking services, it is precisely because the Bolivarian revolution democratised access to these services for millions of people from Venezuela’s lower classes who previously had no account whatsoever.

An example of a banking experience which doesn’t fit neatly into the mainstream media narrative is that of one of our writers this week. Having finally resigned themselves to going to the bank to replace a debit card in total chip meltdown, our writer was in and out of the bank in under ten minutes, replete with a new card and a spring in  step.

In short, yes going to the bank can sometimes be a bureaucratic nightmare, but likewise sometimes it isn’t. It’s often about the luck of the draw, the location of the bank and fluctuations in the economy. Ultimately, access to banking services is now democratic. An achievement which is undoubtedly much more durable and wide-reaching, however seemingly less newsworthy, than how long it now takes to withdraw cash.

Lastly, another of VA’s staff was obliged to seek medical assistance at one of the government's medical centers for a minor motorcycle injury. The writer is happy to report that the experience was a far-cry from the international media’s depiction of Venezuelan health facilities as epidemic-ridden war zones.

The Integral Diagnostic Center (CDI) in the central Caracas neighborhood of El Paraíso is one of hundreds of government-run health clinics set up as part of a bilateral accord with Cuba in 2004. The clinics are staffed by Cuban and Venezuelan health professionals who provide a range of basic health services free of charge, particularly in Venezuela’s poor barrios and remote rural areas that never before had regular access to healthcare.

Not only was the CDI in El Paraíso surprisingly clean and well-staffed, there was virtually zero wait time. After just 10 minutes in the waiting room, our writer was attended by a Venezuelan nurse who proceeded to clean a minor leg abrasion with antiseptic and iodine solutions. Bizarrely, the nurse had access to everything one might find in a “normal” health clinic, including plastic gloves, bandages, gauze, needles, and even an injectable clotting solution. Following attention by the nurse, our writer was seen by a Cuban doctor who patiently answered every question and even provided a 20-tablet packet of Piroxicam anti-inflammatory pills – all in a country where women are supposedly selling their hair to buy painkillers.

Now for the kicker: not in any moment did the CDI staff ask the VA writer for a passport or identity card. This stands in stark contrast to the US where one can hardly get through the hospital door without being bombarded with requests for health insurance information.

None of this is to at all romanticize Venezuela’s health system. The collapse in global oil prices – the source of 96 percent of Venezuela’s export earnings – has severely hampered the Venezuelan state’s ability to import crucial medicines, leading to widespread shortages. However, this is sadly the case in most of the global South where stringent pharmaceutical patents sabotage local production of medicines and colonial legacies cause resources to bottleneck around the capital leaving rural areas especially vulnerable. On this count, the situation in Caracas, where much of the government’s limited resources are concentrated, may vary from that in other parts of the country.

Nonetheless, after another VA writer visited a walk-in clinic in the mostly indigenous, Afro-descendent, and Colombian heritage community of Cachiri, Zulia state, at the end of November, we can confirm that it is not the case that all rural or borderland state health facilities outside of Caracas are in their death throes. Our writer, who was accompanying a newborn Wayuu baby for an initial check-up, witnessed how the less than 24 hour old baby was weighed, examined and given its first immunisations, while our new mama was given a postpartum review as well as  several medications, vitamins, and minerals. Not only were the facilities clean and tidy, but patients had access to a variety of important equipment, including respiration machines for children being treated for bronchitis. All in all, a far cry from the endless articles on Venezuela’s crumbling health system in the corporate news. 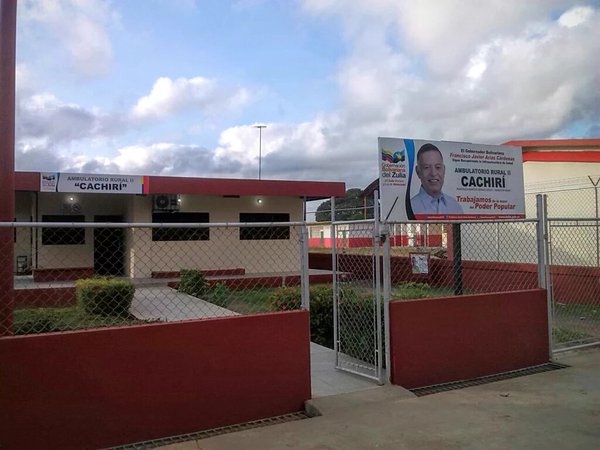 (The walk-in clinic in Cachiri visited by a member of the VA team at the end of November - Prensa).

So there you have it. Reality is not always what is reported in the New York Times. Who would have thought it!

Jul 10th 2018
The struggle cuts across political lines but is deemed too narrow by some leftists.

Apr 25th 2018
WHO claims that lack of supplies has hurt anti-malaria programs in the sanction-stricken country.

Mar 27th 2017
The Venezuelan president announced Friday that he had requested assistance from the United Nations to help the country respond to critical issues in...

Dec 22nd 2016
"What if I told you that in many ways Venezuela is better off than Colombia? Before you angrily stop reading, I ask you to take a look at these figures..."

Dec 15th 2016
The Venezuelan government announced Tuesday a two percent reduction in value added taxes paid in electronic transactions as part of an initiative to...

Nov 25th 2016
It's almost impossible to escape bombardment by the U.S government’s perspective on Venezuela.

Nov 1st 2016
Why does the mainstream media systematically ignore the Venezuelan right’s almost non-stop violence against government personnel and institutions?

Nov 25th 2022
Venezuelanalysis is almost 20 years old! To celebrate we want to share with you a neat infographic that explains our grassroots journalism and how you can...
END_OF_DOCUMENT_TOKEN_TO_BE_REPLACED