The announcement from Venezuela's electoral authority that it would not proceed with a recall referendum has unleashed yet another wave of critical articles and opinion pieces throughout the English-speaking media, labelling the socialist government in Venezuela as “authoritarian” or even a “dictatorship.”

It is a tired tune that people who follow political developments in the South American country have heard consistently throughout the 18-year process known as the Bolivarian Revolution.

Despite the fact that the Venezuelan government's democratic credentials have been affirmed repeatedly—including by groups who cannot be considered to be partial to the government, such as the Carter Center—private media outlets insist on labeling the Maduro administration “undemocratic."

Media outlets are fully aware that if they were to be honest in their reporting about Venezuela, the narrative that the country is not a democracy would collapse under the weight of its own insincerity.

Many outlets, such as ABC News, have completely failed to mention that the opposition-controlled National Assembly is currently in noncompliance with a ruling from the country's Supreme Court, therefore its actions have no legal standing.

The right-wing leadership insisted on swearing-in three lawmakers despite the fact that their elections are in dispute over several serious fraud allegations. In a de-facto acknowledgment of the court's authority and ruling, the leadership of the Venezuelan parliament first respected the order and withdrew the three lawmakers, only to turn around and re-seat them later.

Those that do mention the assembly's contempt of court, such as Al Jazeera, are quick to point out that the Supreme Court has overturned a few bills the parliament has passed.

What they fail to mention is that some of the bills passed by the right wing are so flagrantly in violation of the constitution that one would be hard-pressed to find a legal scholar who would argue in favor of their legality.

As an example, in its mission to oust President Nicolas Maduro, the right-wing leadership of the assembly tried to retroactively shorten Maduro's term. One need not be a constitutional expert to see how that would run contrary to the will of the Venezuelan people who elected him to serve a six-year term in 2013.

In March, the assembly approved a highly controversial bill aimed at granting amnesty to a wide range of crimes committed by supporters of the opposition, including violent protests in 2014, known as guarimbas, that left dozens dead. Relatives of victims of right-wing political violence denounced their efforts to pass such legislation that would essentially absolve the perpetrators of violence. The bill never became law due to its unconstitutionality.

Outlets also fail to mention that despite their name, Venezuela's opposition is deeply divided, with different factions pursuing radically different strategies. In reality, the only thing that unites the so-called Democratic Unity Roundtable is their opposition to the ruling United Socialist Party of Venezuela.

It is this disunity that led to their delay in initiating the recall referendum, making it all but impossible that a recall vote would occur this year.

The opposition is no position to plead ignorance, they attempted a recall once before in 2004 against former President Hugo Chavez. That is to say, they were fully aware that the process takes approximately eight months. 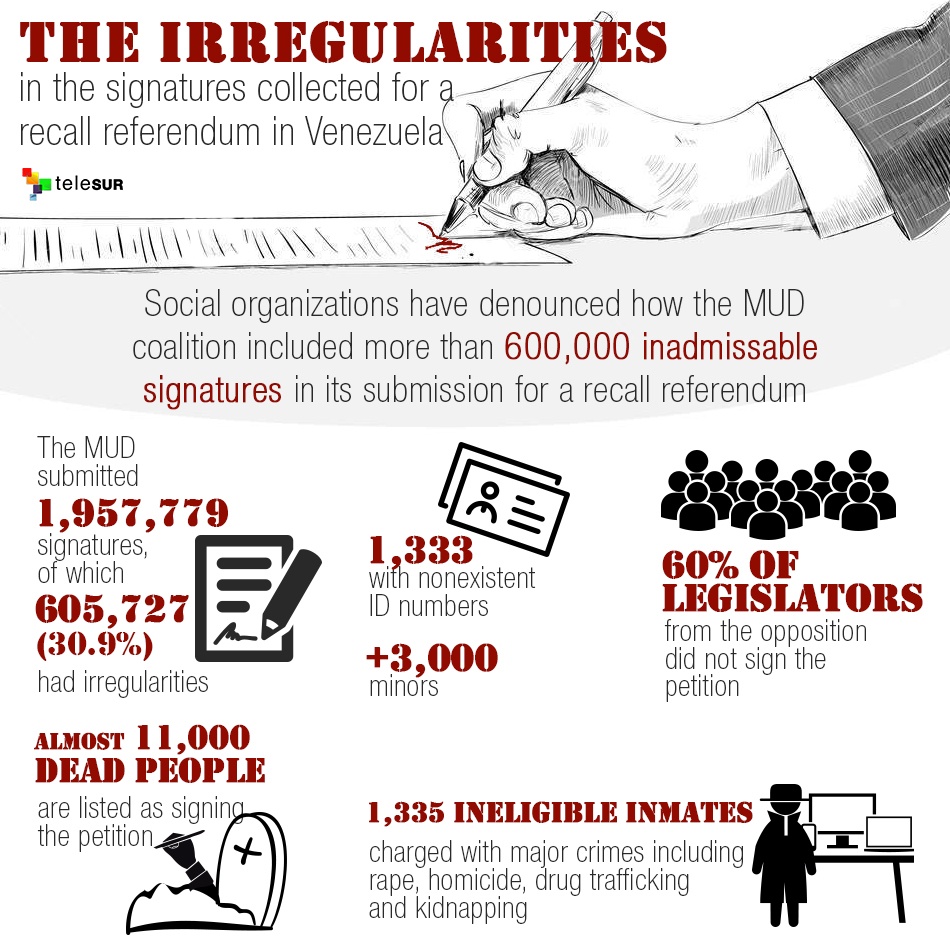 Yet the opposition insisted the recall happen in a rushed manner, and as a result, they submitted a high number of fraudulent signatures—the very same that have now led to the suspension of the entire process. Had the opposition faithfully followed the requirements of the recall process, the government would have been powerless to stop the recall vote from taking place.

This a fact that always goes unmentioned by the private media when they report on the recall referendum.

Disinformation and manipulation are the modus operandi of the Venezuelan opposition and their media lackeys, both domestic and international.

Recent events in the country mirror the lead-up to the 2002 military coup against Chavez. Before staging the short-lived coup attempt, media outlets demonized the Venezuelan government, utilizing the very same language now being used against Maduro.

In 2002, the right-wing opposition tried to delegitimize the Chavez government, staging protests calling for his ouster, and asking for international bodies to intervene.

The role of the media in setting the conditions for the coup attempt to take place was instrumental, so much so that one of the coup supporters even went on television to thank the private media for their role in the coup. In fact, it was that very same manipulation by the media that led Chavez to create more publicly owned media outlets, such as teleSUR.

The resolution issued by the opposition-controlled National Assembly has parallels to another dark episode in the political history of Latin America, the 1973 coup in Chile against democratically-elected President Salvador Allende.

Only months before the violent military coup on September 11, 1973, the Chilean parliament approved a resolution accusing the Allende government of acting unlawfully and calling for the armed forces to act to restore the constitution.

Like Venezuela today, international outlets jumped on this resolution, offering it up as proof that Allende was the head of a totalitarian regime. That media manipulation helped lay the groundwork for the coup.

The opposition coalition appears to be following that script, calling for a major protest Wednesday, dubbed "The Takeover of Venezuela"—something that government supporters view as an effort at destabilization and a precursor to the kind of violent protests seen in 2014 or even another coup attempt.

Oct 27th 2016
In its eagerness to compare Trump to Hugo Chávez, the media has willfully overlooked the rotten Trumpian soul of the very Venezuelan opposition, argues VA...

Oct 24th 2016
Hundreds of Chavistas forced their way into parliament after opposition legislators declared that President Nicolas Maduro had “abandoned the constitutional...

Oct 21st 2016
Venezuelan opposition leader Henrique Capriles has called for the military to “enforce the constitution” after the country’s electoral authority heeded a court...

Oct 12th 2016
When Westerners see “their media” participate in such a vile campaign, they should challenge it.

Nov 25th 2022
Venezuelanalysis is almost 20 years old! To celebrate we want to share with you a neat infographic that explains our grassroots journalism and how you can...
END_OF_DOCUMENT_TOKEN_TO_BE_REPLACED