Weighing in on Venezuela's political and economic situation is in vogue right now, and every pundit and his dog wants to have their say. Unfortunately, many of these pundits know very little about Venezuela, and get basic facts wrong. The latest offender is the influential US free market think tank, the Cato Institute. On June 7, they published an opinion piece bashing Venezuela's president, “Nicolas Madura”.

For anyone who isn't particularly familiar with Venezuela, the country's president is actually a man named Nicolas Maduro. For the casual reader, the reference to President “Madura” may seem like an innocent typographical error. Yet oddly, the article continued to use this incorrect name throughout. In total, the piece referred to “Madura” five times, while not once mentioning the president's correct name, Maduro. 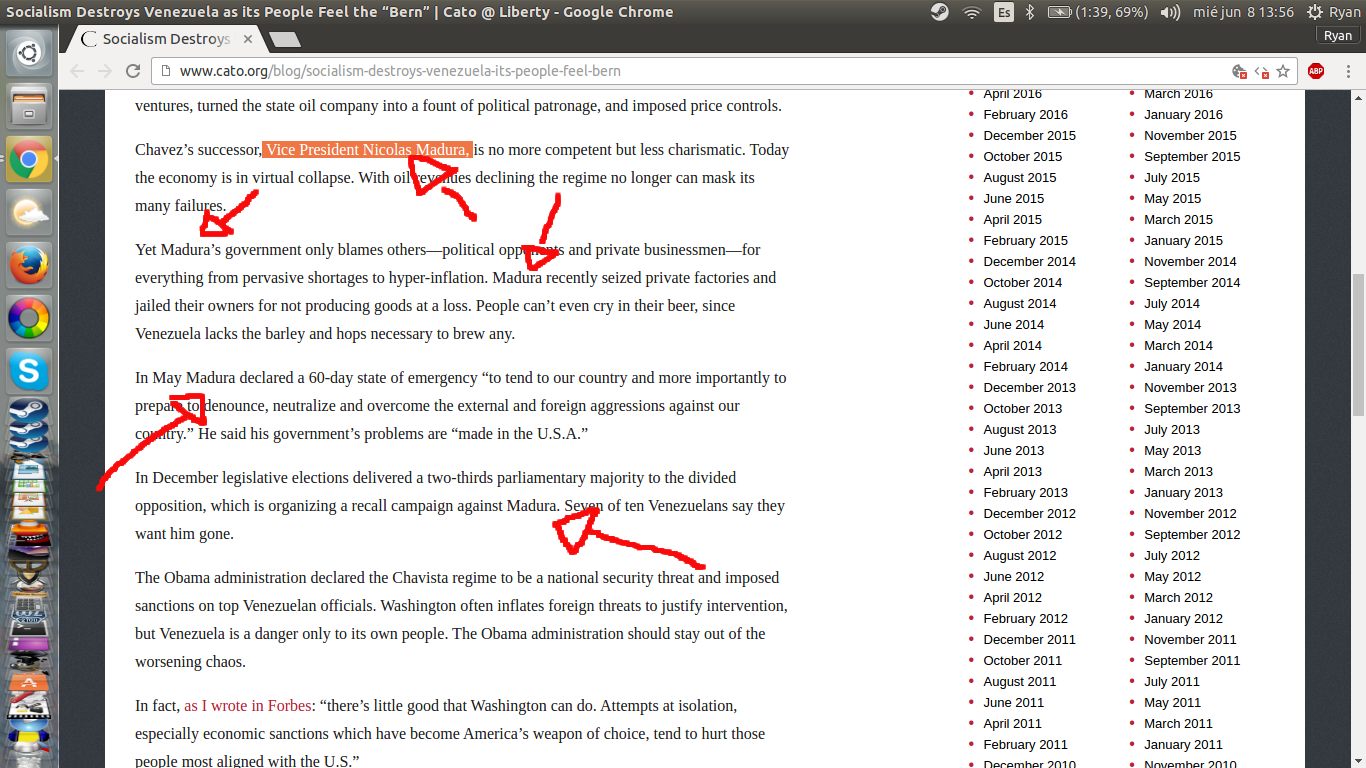 Having trouble squinting? Here's a close up. 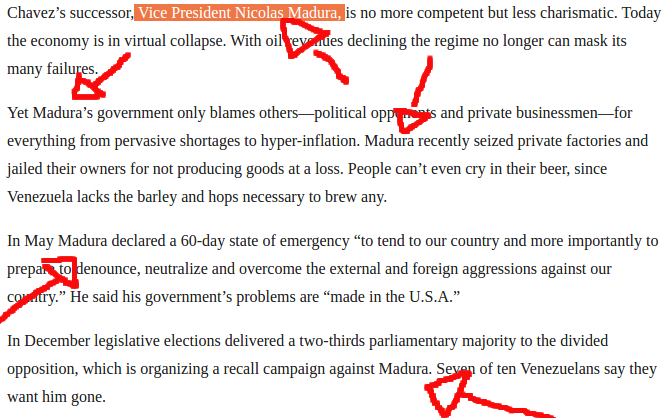 We're all guilty of the occasional typographical error (just ask anyone who has edited any of my articles), but getting basic facts wrong is deeply problematic. You may think I'm being nit-picky, but let me ask you this: would you take me seriously if I wrote an op-ed about US President Barack Alabama? What if I weighed in on the performance of UK Prime Minister Benjamin Netanyahu? Canada's President Justin Hollande? Australia's Tony Turnbull? You'd probably suspect I know very little about these countries and their leaders.

The same applies to Venezuela.

If you don't know basic facts about a country, you probably aren't well suited to writing about it, let alone producing an opinion piece that draws extremely broad conclusions.

In an email responding to a few of my questions, the author of the piece, Cato Senior Fellow Doug Bandow explained the article on the think tank's website appeared to have been taken from an early, unedited draft, and corrected versions had been published elsewhere. To his credit, it's not a bad explanation, and this kind of thing can happen all the time in a rushed newsroom, or any other high pressure environment where time matters.

The problem is that when it comes to Venezuela, these kinds of errors seem to have become unusually common in recent weeks. Back in mid-May, The Guardian published a piece titled “Venezuelan PM braced for protests as political crisis deepens”. Of course, Maduro is a president, not a prime minister.

Meanwhile, the BBC appears to have gotten comfortable using sets of economic data that are dubious at best, such as claiming unemployment is now at 17 percent, and inflation is at a jaw dropping 700 percent. 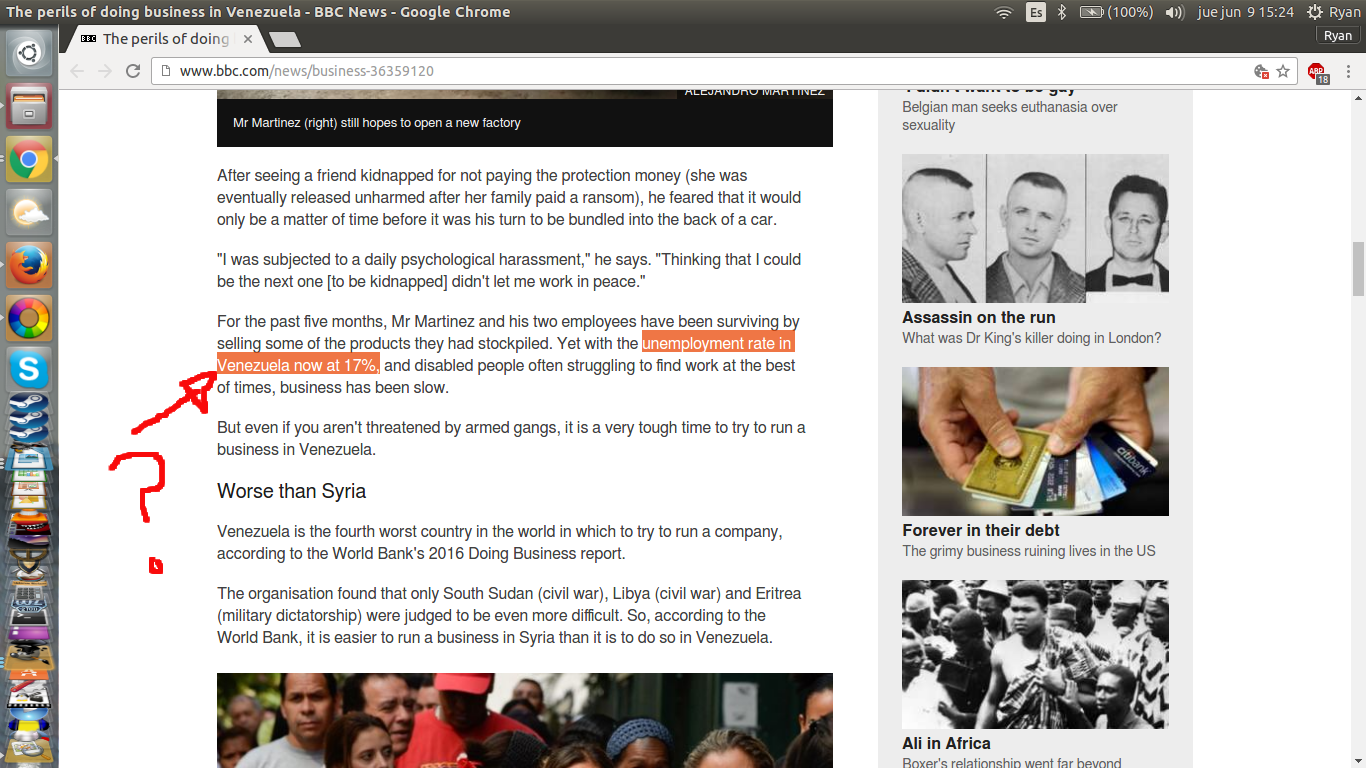 As seasoned debunker Joe Emersberger pointed out, unemployment is probably closer to 7 percent, and annual inflation is on track to hit somewhere around 150 percent. That figure of 700 (actually, 720) percent appeared to be sourced from a controversial IMF document. When it was released in January, it even seemed to raise eyebrows over at Bloomberg, which noted the figure is “nearly quadruple the median 184 percent estimate from 12 economists surveyed by Bloomberg, and exceeding the highest forecast of 700 percent from Nomura Securities”.

The issue here isn't even the extraordinary numbers (perhaps the IMF will be right this time), but the fact that the BBC failed to contextualise them alongside more cautious, broadly accepted estimates. But alas, shocking claims get clicks, while careful, sober analysis rarely goes viral.

Even the normally astute AFP has chalked up its own doozy, recently claiming that hamburgers in Venezuela now cost US$170.

That might sound crazy, and indeed it is. The AFP piece pointed to a burger costing BsF1700, and cited the government's official exchange rate of “10 bolivares for US$1”. However, that rate is only used for importers purchasing priority goods from abroad, such as basic food and medicine. This isn't the rate you'd use to calculate the cost of junk food sold on a Caracas street corner. The actual official rate that would be applicable here is closer to BsF400=US$1, which would mean the hamburger would cost around US$4. At the black market rate of roughly BsF1000=US$1, the same burger would cost less than US$2. AFP's seemingly trivial error in judgement led to a pretty ridiculous journalistic blunder.

A similar mistake was made by the LA Times around the same time, which published a story that claimed eggs cost US$150. Like the AFP piece, the LA Times fumbled and applied the wrong exchange tier, thus getting a totally distorted picture. For the record, a carton of eggs cost something closer to US$3 in Venezuela. It's not particularly cheap (especially for Venezuelans), but nor is it US$150. As usual, reality simply isn't as exciting as the imaginations of some reporters. 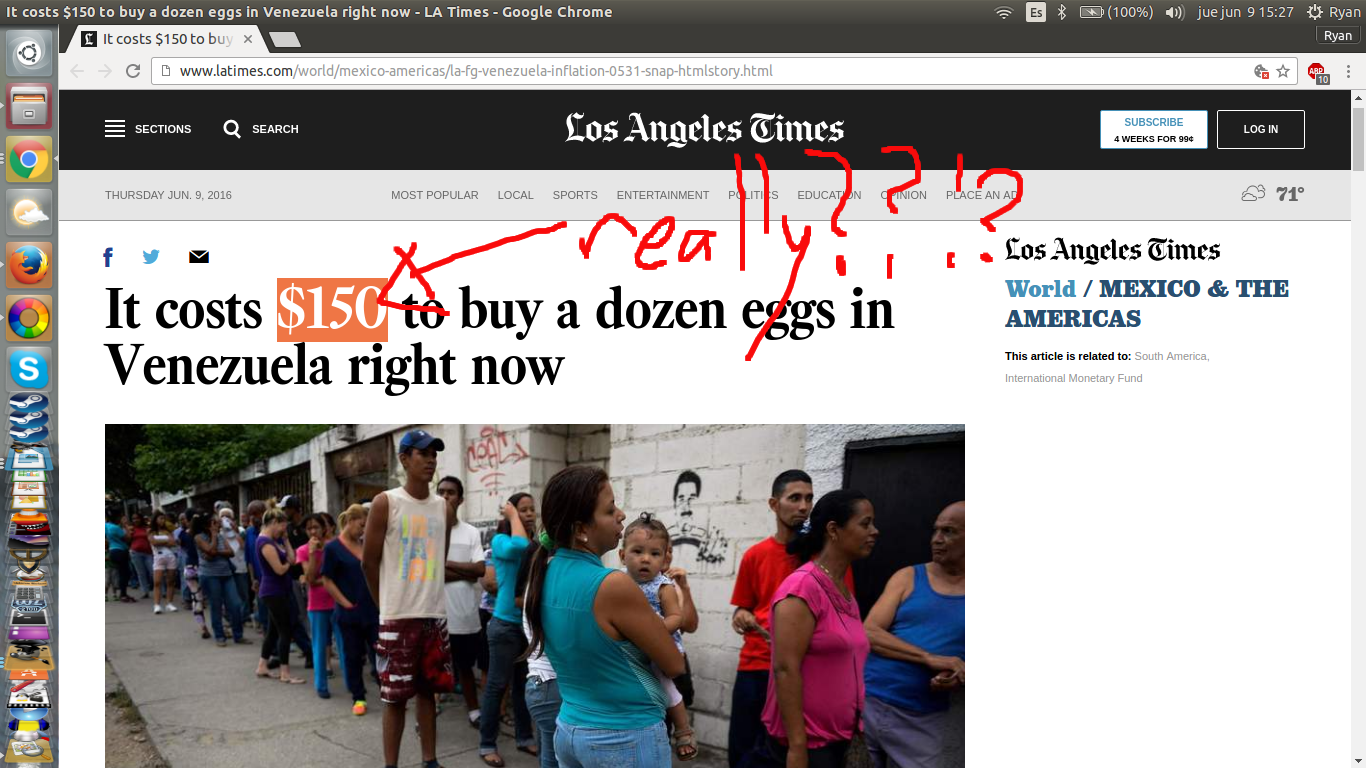 Admittedly, Venezuela's convoluted exchange system is an absolute nightmare to try to understand. The country's political situation is likewise pretty complicated, and doesn't lend itself well to casual, offhand analysis. However, the best ways to avoid making embarrassing mistakes is to either conduct serious research, or simply not write about it in the first place. After all, there are plenty of experienced journalists who have been covering Venezuela for years, and have invested a lot of time in understanding the country. Many of these people have made serious sacrifices, worked extremely hard and taken serious risks to get the job done.

While covering Venezuela, I myself was once held by the military, narrowly avoided molotovs, my partner was almost shot, and I went days at a time without basics like cooking gas. Even today, when I write about the economy, I spend hours pouring over economic data, seeking out alternative opinions, checking facts, and doing my due diligence. When mistakes slip through, they are outliers in otherwise well-researched pieces. If I don't know much about a topic, I avoid writing about it until I understand it backwards and forwards, inside and out, upside down and right way up. The same and more could be said for any number of journalists far more experienced than myself.

Frustratingly, that can't be said for the growing crop of opportunistic pundits who have descended on Venezuela in recent months. Basic factual errors are now a dime a dozen, and inaccurate, sloppy reporting and commentary is becoming normalised. What these opportunists lack in quality material, they make up for with sensationalist claims, clickbait headlines and sheer numbers. Serious journalism is being lost in the crowd, and it's increasingly difficult for average readers to sift through the misinformation. All the while, the myths, distortions and blatant fabrications pile up. Weeks after AFP pulled its piece, the hundred dollar burger continues to do its rounds on social media. It turns out, it's much easier to make a mistake than to fix one.

So please, I beg you: before you start talking or writing about Venezuela, try listening or reading.

Jun 6th 2016
Max Ajl details how political and media elites utilize the media to misrepresent the Venezuelan government following a pattern of intervention across the...

Jun 2nd 2016
International media use classic red-baiting tropes to paint Venezuela as on the verge of apocalyptic meltdown while ignoring the real calamities of war and...

May 30th 2016
Venezuela's opposition may fail to secure a recall referendum this year due not to government sabotage but to internal divisions that prevented it from...

Jan 28th 2016
Joe Emersberger debunks The Economist's latest distorted coverage of Venezuela, including its claims that Venezuelan poverty failed to drop under Chavismo,...

Sep 28th 2022
Feminist groups took to the streets of Caracas to promote a grassroots-led law proposal that paves the way for legal abortion.