Venezuela's President Hugo Chavez (R) gestures next to Nicolas Maduro. Both Venezuelan president have been targets of dishonest and hostile reporting by Western media outlets. (Reuters)

On January 19, an Economist article stated that poverty in Venezuela “has stayed stubbornly static since 2000”.

The blue line in the graph below shows World Bank numbers for poverty in Venezuela from 1999 to 2013. 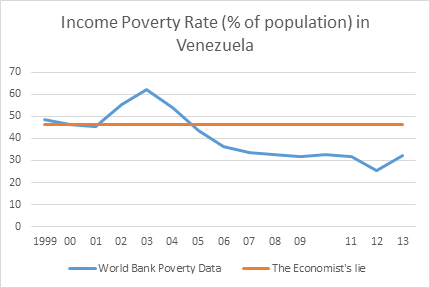 Income poverty increased to over sixty percent by 2003 as result of a briefly successful coup in April of 2002 and a shutdown of the oil industry from December of 2002 until February of 2003. Both these acts of political and economic sabotage were supported by opposition groups funded by the US government. Poverty, as shown in the graph, steadily declined after the government finally wrested control over the state oil company from opponents determined to overthrow the government. By 2013, the poverty rate had fallen by half. The Economist’s dishonesty in saying that poverty “stayed stubbornly static since 2000” is amazing but such dishonesty about Venezuela dominates the international media’s coverage. The Economist need not fear being embarrassed by any high profile rebuttal appearing in any newspaper or magazine at any end of the political spectrum.

Despite the serious economic problems of the last two years, Venezuela’s poverty rate is probably still significantly lower than its level in 2000, and drastically lower than what opposition sabotage had brought it to in 2003. Recall that we are discussing income poverty which does not account for government provided food, education and housing for low income people.

The Economist article also said that the “IMF estimates that Venezuela's GDP shrank by about 10% in 2015, making it the world's worst performing economy. The government admits the contraction was 7.1% up to the third quarter of 2015.”

We can forgive readers who don’t have time to check the Economist’s sources for concluding that the government has “admitted” a 7.1% drop in GDP in the first nine months of 2015. The 7.1% figure really covers an entire year: the third quarter of 2014 compared to the third quarter of 2015. The document the Economist cited actually said that GDP fell 4.5 % in the first nine months of 2015.

Incidentally, a 10% contraction in GDP (which it looks like Venezuela will avoid) will probably not be the worst in the world in 2015. NATO “liberated” Libya, for example, has had its GDP contract by 13.6% and 24% in 2013 and 2014 respectively. It is also inexcusably facile to rank a country as best or “worst performing” on the basis of GDP growth alone as the Economist does. Ethiopia’s GDP was one of the world’s fastest growing in 2014 and in other recent years. It is also among the world’s poorest countries. Ranking Ethiopia’s economy among the “best performing” in the world based on GDP growth is absurd. I am sure the Economist would have happily conceded this point in 2012 (and in any year from 2004-2008) when Venezuela’s GDP was among the fastest growing in Latin America.

Growth in real GDP per capita (which adjusts for both inflation and population growth) certainly can correlate to improved living conditions, but it does not say from what level an economy is improving. Very poor underdeveloped countries, for example, should be able to achieve much higher rates of growth than rich or middle income countries. There are other serious limitations with GDP growth as there are with any single economic indicator. GDP growth doesn’t reveal distribution and it fails to capture environmental destruction.

El Universal used to be as one-sidedly hostile to towards the government as El Nacional until an ownership change in July of 2014. After the change it offered far more balanced coverage, but the international press has depicted it as a “government mouthpiece” even though it is privately owned. The Economist’s source on Venezuelan press freedom is Javier Corrales, who has said that the sale of El Universal is an example of the government establishing a “communicational hegemony” through the “use and abuse of the law”.

The same day (January 19) that the Economist article came out, El Universal ran an op-ed by Roberto Guisti that said President Maduro is “buried in his own contradictions” and that in December’s legislative elections (which were won by the opposition) Venezuela voters demanded “not just a new economic model but, more than anything, a restoration of democracy and civil liberties”.  Giusiti’s anti-government diatribes appear regularly in El Universal and have for years.

On January 19, opposition legislator Julio Borges also blasted the government in the El Universal’s op-ed section. Like Giusti and many others, Borges does so regularly and has for years. Borges’ op-ed made the outlandish claim that the poverty rate in Venezuela is now over 70% and said that the country is living through the “worst crisis in its entire history”. The rapid and sustained fall in oil prices certainly makes Venezuela’s current problems very alarming, but the impact of the opposition led sabotage of 2002-2003 had a much worse impact on the population in terms of unemployment and poverty.

That same day, another op-ed (this one  by Antonio Rivas) said that “only the self-destructive and contradictory nature of chavsimo” could have revived the fortunes of Accion Democratica, whose leader is now Speaker of the National Assembly.

A news article that day ran with headline “They tried to touch my children”. The article spread debunked allegations against a prison official spread by Lilian Tintori, the wife of jailed opposition leader Leopoldo Lopez. The article simply relayed quotes from Tintori and her mother-in-law.

I’m singling out the Economist but they are hardly alone in lying about the Venezuelan media. The New York Times just reported that El Universal “largely tows the government line”.  Rachel Boothroyd-Rojas wrote a brilliant rebuttal to that article. Even some progressive “alternative’ media have echoed the establishment media’s propaganda campaign against Venezuela’s government. A recent piece in Dissident Voice posted a garbled version of what corporate outlets like the Economist regularly produce. There is always a segment of the “progressive” community in western countries willing to echo the establishment. Sometimes – as in the case of NATO’s “destruction of Libya in 2011 – it’s a fairly large segment.

A large percentage of western journalists obviously do not even do their own reading of Venezuela’s newspapers and just repeat what their colleagues say. Some are obviously just being dishonest and some must be afraid to publicly defy what the rest of the media herd says.

Leftists around the world will, understandably, look for lessons to learn from the successes and failures of governments like Venezuela‘s and others in the region. A key lesson is to not underestimate how much work it will take to get around our own media’s dishonesty. Forget that lesson and you won’t get the most basic facts straight.

Mar 7th 2016
Frustrated analysts lash out as if they were the sworn enemies of Capital, showing they'll do anything to disparage Venezuela after the South American country...

Feb 11th 2016
Lilian Tintori, the wife of jailed rightwing political leader Leopoldo Lopez shot to the centre of a diplomatic foray this week, after publicly slandering the...

Nov 30th 2015
Political analyst Joe Emersberger dissects a new study claiming that income poverty in Venezuela has reached an historic high of 73%, demonstrating that such a...

Jun 17th 2014
This article examines the claim that poverty is rising in Venezuela by examining the country’s latest poverty statistics, as well as exploring current efforts...

Nov 25th 2022
Venezuelanalysis is almost 20 years old! To celebrate we want to share with you a neat infographic that explains our grassroots journalism and how you can...