Yesterday (May 18) the Wall Street Journal published a news story at the same time that the State Department expressed its "concern" over freedom of speech in Venezuela. The report is based on supposed "investigations" conducted by the DEA (Drug Enforcement Agency) and Miami prosecutors trying to link Diosdado (Cabello) with drug trafficking. The information presented by the US media outlet is a mix of anonymous opinions, value judgements by US anti-drug officials, declarations lacking any kind of time sequence and unproven speculations about Diosdado Cabello.

All of this is even more telling when we take into account that the Wall Street Journal forms part of the constellation of properties belonging to that great misinformer on a global scale, Rupert Murdoch, the president of the conglomerate News Corporation (which owns Fox News and 20th Century Fox). If we move the magnifying glass closer, we find that sitting on its board of directors is (extreme rightwing Colombian ex-president) Alvaro Uribe Velez.

Otto Reich, a US diplomat involved up to his nose in the April 2002 coup (against Chavez) and in all prior and subsequent conspiracies, made the following comment yesterday about Nicolas Maduro: "It's difficult to say that he doesn't have any knowledge or blame for what is happening around him."

Diosdado Cabello might be the tactical objective of the public relations manoeuvre but the strategic objective is Chavismo.

The fragile technical and journalistic foundation of the news story falls short in the following elements:

They repeat the same propagandistic logic: distract attention away from the proof of the matter by appealing to an anonymous, non-existing source lacking any administrative, prosecutorial, or penal relationship to the "case":

"Salazar says that he had headed Cabello's security team, he said to the US authorities that he had been witness to (Cabello) supervising the sending of a large shipment of cocaine from the Paraguana peninsula in Venezuela, affirmed people close to the case" (emphasis ours).

The exaggerated reference to anonymous sources, such as "officials" from the Department of Justice, "ex-intelligence officials of the Bolivarian National Guard", "Miami federal attorneys", and "elite DEA division" demonstrates the fragility of the news story, and in the same vein, reveals its intent as a propaganda operation.

This past January 27, the ultra-right Spanish newspaper ABC published a propagandistic ruse in which Diosdado Cabello supposedly figures as the head of the "Cartel of the Suns". The defamation quickly crossed the Atlantic: La Patilla, El Nacional, Tal Cual (and their subsidiaries) gave the story exclusive coverage in order to systematically exploit the prefabricated libel in Venezuela.

The orchestration of this public relations manoeuvre on the part of newspaper ABC found its starting (and end) point in the false accusations made by Leamsy Salazar about Diosdado Cabello's supposed link to drug trafficking. But beyond this lie told in exchange for dollars, on what other sewer pipes (in this case, synonymous with "sources") do the owners of ABC rely in order to give a semblance of validity to their news garbage?

The director of ABC, Bieito Rubido, said the following about the sewer pipes utilized to publish the news scoop: "This is information that is more than corroborated. Besides, we have a great track record. I can tell you that nothing here is published if it's not well confirmed; in this case, the sources are very serious: from Spanish intelligence to the CIA and DEA."

In Venezuela, the large drug trafficking circuits began to come under attack openly when Comandante Chavez expelled the DEA from the country in 2005. To demonstrate the proof: following this decision, over 200 covert landing strips have been destroyed to prevent drug trafficking between the largest drugs producer on the continent (Colombia) and the largest drug consumer in the world (United States). Thirty planes connected to drug trafficking were shot down in 2013. Thirty three drug traffickers arrested in Venezuelan territory have been deported to Colombia and twenty one to the US. That the DEA has been used as a source exposes the weak (and mafia-like) foundation of the story.

The CIA has been linked to each and every one of the conspiratorial and coup-making processes against the Bolivarian Revolution, call them coups, economic war, assassination attempts against the president, or barricades (guarimbas). (The CIA is) another sewer pipe that logically excretes pestilent water against the Revolution that it has been unable to overthrow. The CIA being used as a "journalistic sewer pipe" demonstrates what their intentions are.

Spanish intelligence was also charged with designing Plan Balboa, specifically during the presidency of Jose Maria Aznar. A government that planned to invade Venezuela during the April 2002 coup cannot present itself as an "impartial source" for a news story. For this reason, Bieito Rubido reaffirms (his newspaper's) "great track record", while scratching his eyes and smiling anxiously trying to dodge any uncomfortable questions.

A Pair of Jewels

The newspaper ABC, in the middle of the corruption scandals battering Spain, bears an extremely large responsibility, alongside the financial and business interests of that continuously plundered US-German semi-colony. The task of Bieito Rubido has been to cover up, omit responsibilities and distract citizens' attention away from tax and fiscal crimes committed by the leadership of the PP (Popular Party).

Look at the following ABC front page on the Barcenas case, one of the largest scandals concerning illegal party financing in Spain, which totally ignores the two principal beneficiaries of the bonuses and commissions (calculated in millions of euros) granted by Barcenas: Mariano Rajoy and Jose Maria Aznar, who sparkle in their absence. 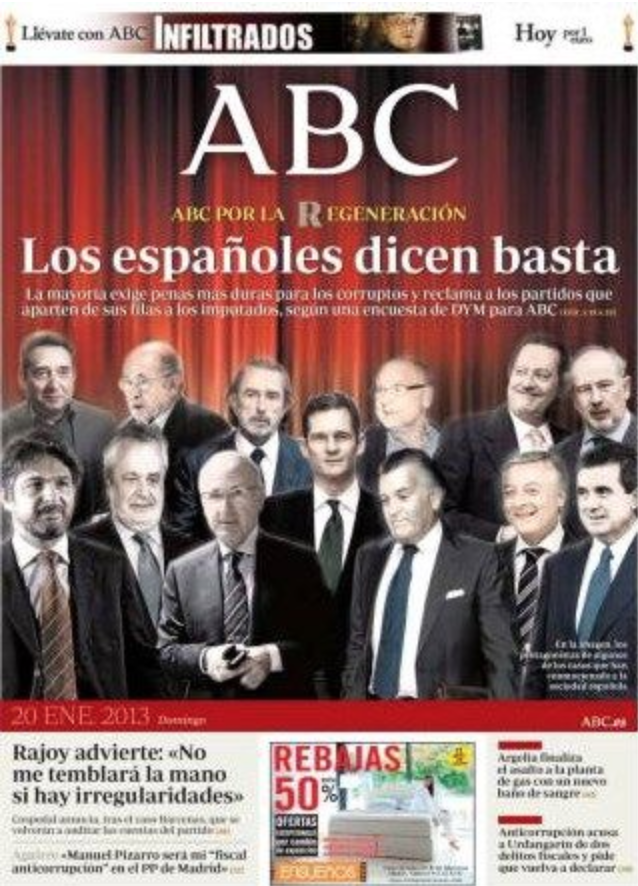 ABC simply busied itself with grouping together in the photo the second grade actors who participated in the fiscal crime.

The info-mercenary in question has extensive experience in necrophilic yellow journalism, showing his unwholesome skills as a mouthpiece for hire when Comandante Chavez was in Cuba in the months prior to his death.

In  January (2013), he (Blasco) said that Chavez's "cancer was terminal", that "(Chavez) had suffered various cardiac arrests", that the "Cuban authorities"  wanted to "distance" Diosdado Cabello from the Venezuelan Presidency. Statements taken from the mafioso banker Pedro Burelli.

He is a fanatic of lies and about Diosdado. Just like Ravell, Teodoro (Petkoff), and Miguel Henrique Otero.

La Patilla and Tal Cual were the principal media outlets which circulated this libel. The president of the National Assembly, Diosdado Cabello, faced with the slanderous attack of the (national and international) media, decided to bring a (legal) case against the directors of these media war laboratories.

Once a legal prohibition was decreed barring these actors from leaving the country with the purpose of guaranteeing that the investigations follow their effective course, statements of solidarity were not late in appearing. Not only solidarity amongst the elite, but the articulation of a discourse for and on behalf of the war waged by specific actors of the ultra-right: MariCori (Machado) begins to speak of the "mafia state" with greater frequency from that moment on.

One of the fundamental justifications behind the (still in force) Obama Decree is related to Venezuela's supposed relationship with drug trafficking. The establishment media dream (these things up) and sometimes rile up those (ultra)interested in promoting permanent conspiration and destabilization.

Yet knees have already begun to tremble. In the face of this backtracking, it's necessary to pose the question: if the "source" (better put “sewers pipes") are reliable, why haven't Rubido or Clasco revealed the DEA reports that make the accusations against Diosdado? Why doesn't the newspaper ABC produce the reports by Spanish intelligence and the CIA? Why haven't the (clandestine) air strips, the international links and Swiss bank accounts that name Diosdado the supposed head of the "Cartel of the Suns" appeared? Why haven't Ravell, Miguel Henrique Otero, and Teodoro Petkoff published the investigation undertaken by the US?

The Wall Street Journal ups the ante in the campaign against Diosdado Cabello. And this public relations coup will not answer these questions: it's not its end goal or fundamental objective.

However, in the current context there is a political inertia on the part of the opposition, whose helplessness was made more than clear by the scant participation in the primaries held Sunday (May 17). In the face of this inertia, the public relations manoeuvre aims to fulfil the same objective set since January, when the campaign against Diosdado Cabello officially began: to undermine the (emotional, moral, and political) bonds between the Chavista people and its most recognized leaders.

The owners of the hegemonic Venezuelan media (La Patilla, El Nacional, and Tal Cual), knowing very well that they need to win time (and support), are desperately firing off flares with the goal of getting the moribund Pan American institutions (OAS, Inter-American Court of Human Rights, Inter-American Press Association, etc.) to once again issue statement in defence of "freedom of expression", while lamenting the scarce political capital remaining in an anything but encouraging pre-electoral environment. The declarations by (former Spanish prime minister) Felipe Gonzalez in favor of "freedom of expression" and the prize that they bought for Teodoro Petkoff run along this same line: buy time and geopolitical hostility to the Venezuelan government.

After the victory of Venezuela at the Summit of the Americas, the internal political scene became an uphill battle for them (the opposition), and in this context, propaganda and dirty war are the only devices they have left.

Meanwhile, Ravell, Otero, and Petkoff are making incommensurable efforts to disguise themselves as Harina PAN (most popular brand of flour) to see if they can be smuggled out of Venezuela via Ureña (on the Colombian border).

Translated by Lucas Koerner for Venezuelanalysis

Apr 19th 2021
The Supreme Court ruled that the opposition newspaper landed unsubstantiated accusations that the socialist deputy was linked to drug cartels.

May 21st 2015
The Venezuelan legislative branch of government and the Supreme Court have vehemently rejected reports that the US is probing National Assembly president...

May 19th 2015
US federal authorities have opened an investigation accusing Venezuelan National Assembly President Diosdado Cabello and other top officials of involvement in...

Apr 20th 2012
A Venezuelan judge has fled to the United States after he was dismissed as a Supreme Court Magistrate on March 20th, when an investigation was launched into...

Jan 31st 2023
“We ratify our commitment to the defense of human rights and the will to advance in the improvement of the justice system,” said Maduro.
END_OF_DOCUMENT_TOKEN_TO_BE_REPLACED