The rise of Spain's Podemos (We Can) from zeroes a year ago to potential heroes of this year's general election has shocked the rest of Europe. But their lead in the polls has brought a new level of scrutiny and hostility from the ruling People's Party and the centre-left PSOE.

The latest charge is that Podemos "has its origins and roots in Venezuelan money", namely illegal donations channelled via the party's founders, many of whom worked as consultants to the Latin American left. That attacks on Podemos have increased with their popularity is no surprise, but this one is especially dangerous. As novelist Isaac Rosa notes, "few places have reached Spain's level of ferocious anti-Chávez feeling ... present in most of the media, in politicians, but also in society, including parts of the left".

First things first: is it true? 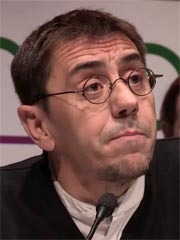 If you know Venezuelan politics, the most striking thing is that this is news at all. The central figure, Podemos number three Juan Carlos Monedero (right), has been a fixture of Venezuelan politics for as long as I can remember, ubiquitous in academic forums and the media (sometimes chatting with Chávez), identifying openly as a government consultant. My own article on these links appeared in August 2014, with many others before and since. So why the sudden uproar?

Basically, because someone realised long-public accounts of the thinktank from which Podemos emerged (CEPS) show receipt of £2.7 million from Venezuela since 2002. Again, if you know Venezuelan politics, this is nothing outlandish. Monedero was but one of numerous CEPS advisers, including Podemos figureheads Pablo Iglesias and Iñigo Errejón, working closely with the Venezuelan government. Neither is it surprising that the Venezuelan government, flush with oil money and facing an implacable opposition, would pay such advisers well. To a state that in a single year lost $20 billion dollars to fake import transactions for currency arbitrage, £2.7 million on real consultants is a very small potato. Others question why Monedero received payment in 2013 for work done in 2010. They might ask the hundreds of regional exporters waiting months and years for Venezuelan debts to clear. Sadly, to find things running smoothly would be more surprising.

All of which is actually immaterial to the charge of foreign intervention, since it would only matter if leaders' money had gone into Podemos, which it hasn't. An independent audit of party accounts found that no executive member had donated more than €100. The vast majority - more worryingly for political rivals - came in small amounts from crowdfunding.

So, at a time when Podemos was but a twinkle in its founding fathers' eyes, they did receive money from Latin America for work they undertook openly, but this money did not fund the party. Am I missing something? Or was Tony Blair's gap year working at a bar in Paris a devious French plot to fund promote the nouvelle gauche? 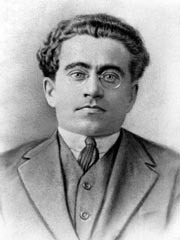 The dreary answer to "who influenced who?!" is that Podemos and Chávez each turned independently to the intellectual left when the neoliberal model fell over. Much has been made of Podemos' debt to the Argentine neo-Marxist Ernesto Laclau, no doubt familiar to them from their academic careers; Chávez favoured Hungarian neo-Marxist István Mészáros, PhD supervisor of his closest economic adviser Jorge Giordani. Both theorists were channelling Italian Marxist Antonio Gramsci (right) anyway, so the most significant influence in either direction was probably Podemos' first-hand experience of what can and can't be achieved through a mass movement towards participatory democracy.

"Terror in the Andes!": Birth of the Toxic Venezuela Monster

So if this is not heinous Venezuelan intervention in Europe's fifth largest economy, what is it? Again, the answer lies in Latin America.

Peru's Alan García was the first to realise that Venezuela could be used to discredit political opponents. Up against former soldier Ollanta Humala in 2006, García's principal line of attack was that Humala was a Chávez lackey, his campaign paid for by diplomatic bags full of filthy lucre. Despite producing no evidence, García overturned a first-round deficit of six percentage points and won the presidency.

Later that year Mexico's right-wing candidate Felipe Calderón, under challenge from leftist Andrés López Obrador, ran negative campaign ads (above) that showed Chávez warning Mexican president Vicente Fox "not to mess with him" followed by clips of López Obrador telling Fox to "shut up, big mouth!" at a rally. Another had Chávez announcing imports of AK-47s against a backdrop of weapons, guerrilla fighters, and dissonant music. The impact was massive, with an immediate twelve-point spike in Calderón's ratings. López Obrador lost by 0.58%, depriving Mexico of its first left-wing government since the end of one-party rule and bringing in the president who oversaw the country's downward spiral into astonishingly brutal drug violence.

What they had realised - and what Latin American politicians have known ever since - is that Venezuela is a toxic brand. Whole digital forests have fallen to articles on media bias against Venezuela, and to any disinterested observer who knows the country the phenomenon remains mind-boggling, but let's not rake over old coals. Suffice it to say that the latest BBC Mundo headlines on Mexico and Colombia concern a decapitated politician and a series of bombings in Bogotá. These events barely registered in the English-language media, yet when things a hundred times less serious happen in Venezuela, the howls can be heard on Venus. But there is sometimes a lack of toilet paper, granted.

Toxic Because It Contaminates, Monster Because It's Beyond Rationality

The unfortunate fact is that the "media war" is lost. To say "Venezuela" in the same breath as "North Korea" is entirely acceptable to most people, including much of the left. How a renowned historian like Simon Schama (right) - not an idiot by any means - felt qualified to claim on Question Time in 2010 that Venezuelans "would give their eyes for a real democratic verdict" is still beyond me (Chávez had already won six fair elections on his presidency). But even more revealing is that it went unchallenged, with the BBC's later apology for this frankly ludicrous statement reaching a tiny fraction of the three million socially influential viewers who saw the original broadcast.

Spain's traditional parties are just the latest to realise that what you say about Venezuela nowadays doesn't even have to be true. So they claim to "reveal" payments that were never hidden, whereas "supposed" donations "have to be confirmed". The wall of media sound behind standard tropes of Venezuelan wickedness means you need only say "Venezuela" and "Podemos" before standing back to watch the fun.

Worse, Venezuela is now beyond discussion, with the pathological polarization of its domestic politics reproduced in miniature around the world. Isaac Rosa's conclusion for Podemos is sombre, but I can't improve on it:

"[Detractors] have found an inexhaustible seam for wearing down [Podemos], a leak through which they hope support will drain away. They're going to make some of Podemos' founders pay for their recent relationship with the Venezuelan government, and we'll soon see how much. The worse things get in Venezuela - and they will get worse, though we can't even discuss why - the more damaging for Podemos."

Podemos is just the latest victim of the toxic Venezuela monster: Syriza beware!

Apr 1st 2015
Podemos has gained traction by drawing on lessons from the Latin American left.

Mar 30th 2015
The author contends that the recent wave of false rumors concerning the kidnapping of Venezuelan children is part of a campaign of psychological warfare aimed...

Jun 4th 2014
At a summit in 2007, Juan Carlos de Borbón, King of Spain, the head of state hand-picked by dictator Francisco Franco as his successor, was moved to outburst...

Jun 2nd 2014
This is a translation of an article by journalist and media analyst Pascual Serrano, published in eldiario.es. It addressed what Spain’s new “citizen left”...

Jun 19th 2012
In the June 17 elections, anti-austerity Coalition of the Radical Left (SYRIZA) came a close second with 26.9% of the vote. In an interview with Telesur,...