“Be very careful if you’re going to Venezuela, especially Caracas. It’s the most violent city in the world. There’s no food over there- they don’t even have toilet paper. Those two communist governments ruined the whole country. Before, the bolivar (Venezuelan currency) used to be valuable than ours,” a taxi driver warned me in Barranquilla, Colombia.

Duly warned, I asked my friendly host driver, “How much does gasoline cost there, and how much does it cost here?” He replied, “Well OK, in Venezuela it’s practically given away. The gallon costs no more than 150 bolivars, (about two dollars), [translator’s note: this is the price at which Colombians may purchase Venezuelan gasoline. The actual price is close to 30 cents of a bolivar, or $0.03], here in Colombia the gallon costs nine thousand pesos, (about five dollars). But over there, there’s no food.”

This is the stereotypical view of a country with no toilet paper, an absence of food and an abundance of violence, to which the Colombian public subscribes regarding their neighbor country, Venezuela.

In the Caribbean half of Colombia, insecurity and uncertainty manifest itself in cities whose stores close at 6 PM, whose streets empty by 7 PM, with an abundance of commercial and edible goods, at high prices.

Between Santa Marta and Maicao, a border city on the Colombian side, one will not find the “avalanche of Venezuelans” seeking refuge from hunger, violence, and the lack of toilet paper. This is what a visitor, so frequently warned, expects to see when crossing from Colombia to Venezuela, but nothing of the sort exists.

What you can see is a multitude of Colombian citizens crossing over to reach the commercial city of Maracaibo, Venezuela. They look almost like backpackers, hardly bringing anything with them into the hungry, violent land. During the crossing, the taxi drivers and passengers alike will grumble and complain of the corrupt Maduro government which ordered more control and anti-smuggling patrols to guard the borders.

On the way from Maicao, Colombia to Maracaibo, Venezuela, our taxi driver made two strategic stops to fill his automobile with gasoline from black market salesmen along the way. In response to my innocent question whether this, too was an act of corruption, the anti-Maduro passengers replied in unison; “This will never end. This is people’s livelihood here.”

“Here we fill up our tanks with gasoline with just four of these coins,” my taxi driver said, holding out a small metallic coin as he takes me from the bus terminal to my hotel, in the city of Caracas. And I ask him, if gas is so cheap, “Why are you charging me 250 bolivar for this trip then?” Unable to take back the contradiction he responded, “Here gas is cheap, but pants cost most than 2,000 bolivar. And there aren’t many.”

I did not see famine in Caracas. The markets and restaurants are full of low-priced food and other products. He who has dollars or Colombian pesos can enjoy goods and services of the best quality. The majority of commercial goods here cost a tenth of what they’re sold for abroad. And this phenomenon occurs thanks to the state which controls, through certain measures, the production, distribution and commercialization of goods and services within the country.

Gasoline is cheaper than bottled water because the state controls the energy sector. Domestic flights cost almost the same as land transport, because the state owns certain airlines [just one- Conviasa]. The urban and intercity metro system, aside from being clean and efficient, charges practically a symbolic amount per ticket (1.50 bolivars). With one dollar exchanged on the black market, one could ride the Venezuelan metro rail 50 times. There are at least four exchange rates for the dollar; three official and one underground.

New buildings spring up in different parts of the city, constructed by the government for families who can’t afford homes. 600,000 Families have already been placed in theirs… and the state says one million apartments or houses are currently under construction. The goal is to reach three million for needy families. State supermarkets also exist, which sell national and imported products at much lower prices than privately owned markets. There are state stores where the latest generation laptops are sold for 9,000 bolivar (a little over $100 on the black market). Books, in state bookstores, are sold also for symbolic prices. The almost two million university students don’t only receive “free” higher education, their meals are equally subsidized by the petroleum income.

In Bolivarian Venezuela there is no destitution, although material and moral poverty do exist. Violence does exist, although it has decreased, but one can walk the streets of Caracas until 10 or 11 PM (until the metro stops working). It’s a country where the neo-liberal capitalist system runs alongside a socialist system in process. The former waging war without mercy on the latter. 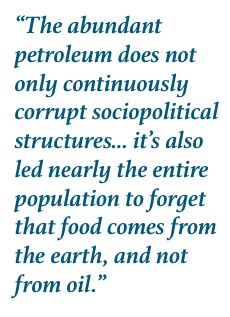 There is enough food, though perhaps not enough to waste. There is an abundance of toilet paper, though not the scented, pink kind. The country has as much petroleum under its soil as the generalized public corruption one hears of and senses in public administration. The abundant petroleum does not only continuously corrupt sociopolitical structures within the country, it’s also led nearly the entire population to forget that food comes from the earth, and not from oil.

After observing the flow of every day life in the beating political heart and Bolivarian economy, I realize a selfish system and a system of solidarity cannot coexist for very long. Much less without declaring war on one another; and this is what is happening in Venezuela.

Why are books on contemporary Latin American political changes not offered in Colombian bookstores? Why do viewers there have little access the the news channel TeleSUR? Why do neighboring Colombians frequent the hungry and violent Venezuela, with empty backpacks? Why does the Venezuelan commercial oligarchy hide products they import with dollars subsidized by the Bolivarian state?

Why do corporate media vultures poison international audiences with stories of missing perfumed toilet paper, with no mention of the undeniable achievements of the Bolivarian process? Why is it that for news channels like CNN, it’s considered a deed worthy of world news when the president of Honduras stages a public event to deliver a soccer ball or a dozen computers on a stage, and they say nothing the social, cultural, technological and economic accomplishments of the Bolivarian Venezuela?

Translated by Z.C. Dutka for venezuelanalysis.com.

Oct 23rd 2014
If recent years have marked not the establishment of a socialist country but the appearance of the poor in the public life of the nation, then it is clear that...

Aug 26th 2014
As international media plays its favorite old game of lambasting the Venezuelan government, long-time observers of the Bolivarian process may be wondering how...

Aug 21st 2014
“What we’ve discovered is much worse than we imagined,” said Venezuelan president Nicolas Maduro yesterday while outlining the latest results of new measures...

Aug 14th 2014
In an attempt to combat rising border smuggling and contraband sales, Venezuelan officials have decided to close the border between Venezuela and Colombia...

Jan 14th 2022
A Venezuelan economist discusses the impact of the economic war on the Venezuelan people and the policies that should be implemented in the face of it.
END_OF_DOCUMENT_TOKEN_TO_BE_REPLACED