A familiar sea of red shirts, large banners and a revolutionary sing-along soundtrack: at first glance this year’s march for the International Workers Day was business-as-usual in Mérida City, Venezuela. The celebratory atmosphere was due in part to the announcement by President Nicolas Maduro on 30th April of a 30% increase in the national minimum wage. A closer look, however, revealed a certain determination and a higher turnout as local activists reacted en mass to three months of blockades, violent attacks and assassinations by anti-government groups that are seen as representing the interests of the city’s other social class.

As the National Guard moved in and removed Merida’s last and deadliest barricades last week, the expected violent response in Las Americas and the surrounding areas did not materialise. It seemed even the middle class residents who had supported the groups barricading their communities for the last three months had had enough of life under siege. Celebrations were short-lived. Even as the helicopters left and shops and roads reopened, rumours were spreading of a second phase of anti-government violence based around targeted hit-and-run attacks on individuals and institutions.

The murder of former soldier and renowned revolutionary Eliecer Otaiza in Caracas on Tuesday 29th April and the deaths of two public sector workers in Guairico the following day were seen by some as confirmation of this new stage of political violence, and meant heightened tension for the thousands of Venezuelans taking to the streets in solidarity with international workers on 1ST of May. In Mérida City, I talked to some of those marching about why they were reclaiming the streets for the working classes.

“We are here in defence of the Revolution, in one of the parts of the country most penetrated by North American imperialism. Today is a very special day, a day in commemoration of international workers, but particularly here in Venezuela we remember the oil workers who rebelled in the nineteen thirties, the peasant rebellion against the Spanish and the slave rebellions here- these are all part of the workers' movement. The famous uprising here in 1989 known as the Caracazo was also part of the Venezuelan workers' movement, a movement that saw Commandante Hugo Chavez arrive in power in 1999. And when that happened the world oligarchy, and the Venezuelan oligarchy and their people have tried to destroy this government of the workers.

This movement of the workers is not just Venezuelan, but Latin American, and when they attack it, they attack the workers' movements of the world. This date is very important not just for Merida, not just for Venezuela, but for workers all over the world. There is a mega-march in Caracas today. Here we are organising against everything that has occurred when Mérida was occupied, with the barricades and paramilitary action. People are afraid, but the workers of Merida are brave and they will defend their city, for that reason we are here in the street. There is danger, but we have to confront it. The message of the revolution is peace.” 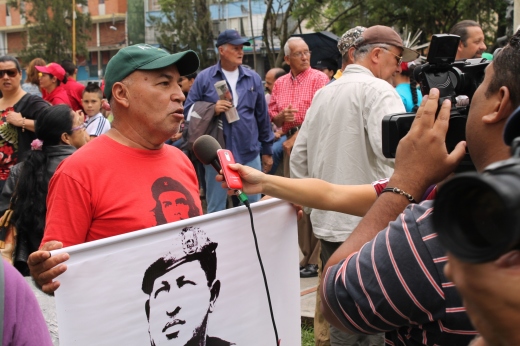 Celebrating and Protecting Progress on Legislation for Workers Rights

Juan Luis Suarez, District Attorney for the State of Merida

“This is a spontaneous march at a national level, a mobilisation of the workers and trade unions of Venezuela. We are celebrating the fact that we have achieved a new law, a regional, national and international law given to us by President Maduro to indicate the minimum dignified conditions of labour for workers and confirming their right to participate in decisions concerning their work. We are re-writing all the neoliberal socio-economic concepts that existed before. This means that all of the progress made by workers internationally is enshrined in a law in Venezuela, to protect their salaries from the fluctuations in the price of oil that we have seen over the years.

The theme of industrial security is also a priority for us in the state of Merida, so we also have a new law safeguarding the physical and psychological wellbeing of our workers with new institutions. And this new alternative will include the participation of all the sectors, the poor, agricultural workers, women, the young and the old.

The streets belong to the people and for that reason we will defend them. Today is an expression of the working people. We are teaching ourselves to defend ourselves like this- peacefully, by mobilising and defending our rights and deciding ourselves how we will engage with national and international economic interests. Education, work, health, security and the economy: these are the priorities of the revolution, of our President Nicolas Maduro, himself a former trade-union leader. We are expanding privileges to the masses that were enjoyed by very few people before. This is a revolution for all Venezuelans, including the middle and upper classes, including those who have no class consciousness as well. We have broken the rules that said that one man could exploit another man in Venezuela. We are looking for the maximum possible happiness for everyone.” 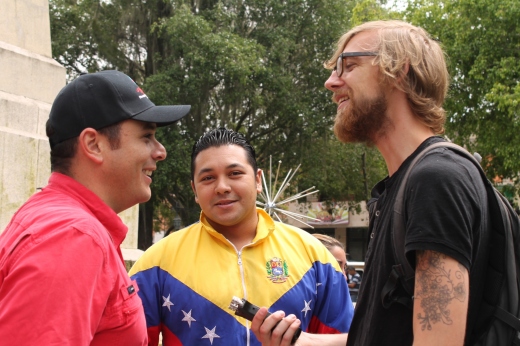 Juan Luis Suarez is the District Attorney for the State of Merida. (Harry Greatorex)

Re-writing the Story of Venezuela

“The reason we commemorate and also celebrate the first of May in Venezuela is because the working classes of Venezuela have initiated an historic process of liberation, with the oversight of the late President Hugo Chavez: liberation from Venezuela’s position as a colony of North America. The Bolivarian Revolution has not only given us strategic control of our own resources, such as oil, but has enabled us to recuperate our own collective memory: our memory of struggle, our memory of battle. The Bolivarian Revolution has converted the forgotten story of Venezuela into the official story of Venezuela. Where before we had the perspective of the dominant class, now we have the perspective of the dominated class.

This new official story is not a colonised story, it is a story of liberation, a story of the people, a story of oppression. The working class of Venezuela has achieved significant things even though we are still not in socialism. The Bolivarian Revolution is following a historic process, creating the conditions to advance socialism. The mark of this struggle, of this transition towards socialism, is the Organic Law of the Workers, which lays out the norms of the Venezuelan workers, in their rights, in the conditions of their work environment, in their social security. This extends not just their rights to fair pay. What has been protected by the Bolivarian Revolution includes the limitation of the working day to seven hours, so that workers have the possibility to share their lives with their families, to study, and to grow spiritually and improve as individuals, to improve from conditions of exploitation. That is where we are going.

We have succeeded in overcoming the barricading of communities, which was a serious strategy aimed at overthrowing the government. The ‘soft coup’ as they say, was intended to destabilise the government of Nicolas Maduro and to produce the conditions for an ultra-right-wing coup through a North American military operation. This strategy was a challenge for the Venezuelan revolutionaries, for their patience, for their serenity, but our people did not allow themselves to be provoked. It was not because our people did not want to confront the barricaders, because they are not brave. The Venezuelan revolutionaries did not confront the barricaders because it was an order from our President Nicolas Maduro. They did not allow themselves to be provoked and supply the conditions for a civil war. We know their strategy, and we remain alert.” 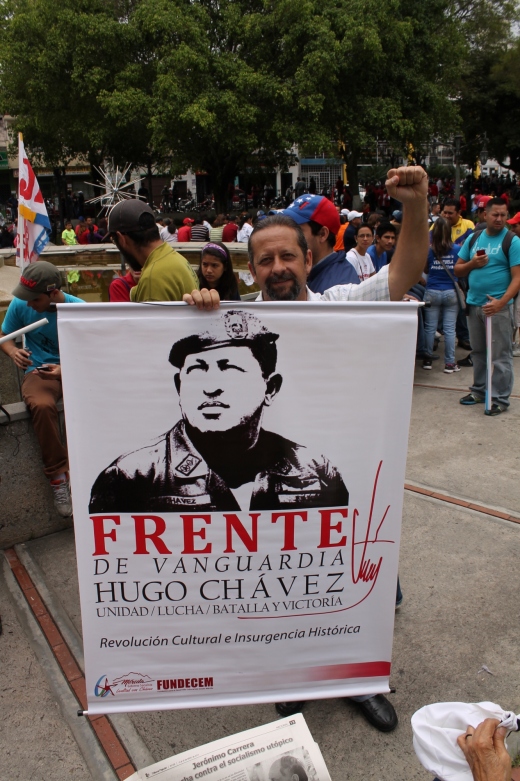 These comments reflect what is at stake for Venezuela’s working classes as destabilisation attempts continue and international concern mounts. The significant achievement of the Bolivarian Revolution is in progressive legislation and in writing new national narratives, oriented to reflect the concerns and stories of the previously excluded. The 30% increase in the minimum wage is a clear example of this process. It is to protect these achievements that Venezuelan workers took to the streets on May 1st in support of their Revolution, despite the continued threat of anti-government political violence. Peaceful mobilisation, local political organising and innovation in development of communities and workplaces are the means not only to resist destabilisation but to continue Venezuela’s path towards an inclusive form of socialism. It is for this status as a work in progress, as part of an ongoing dialectic, as an example of what begins when the door is opened to the rights and agency of the working classes, that the Bolivarian Revolution ought to be supported.

Harry Greatorex is a postgraduate researcher at the School of International Development, UEA.

May 3rd 2014
Gonzalo Gomez, a founder of alternative Venezuelan news website Aporrea.org, and a member of Socialist Tide, a critical left current within the United...

May 2nd 2014
In his May Day speech at a large rally in Caracas, President Nicolas Maduro announced the extension of social programs and benefits to workers and the...